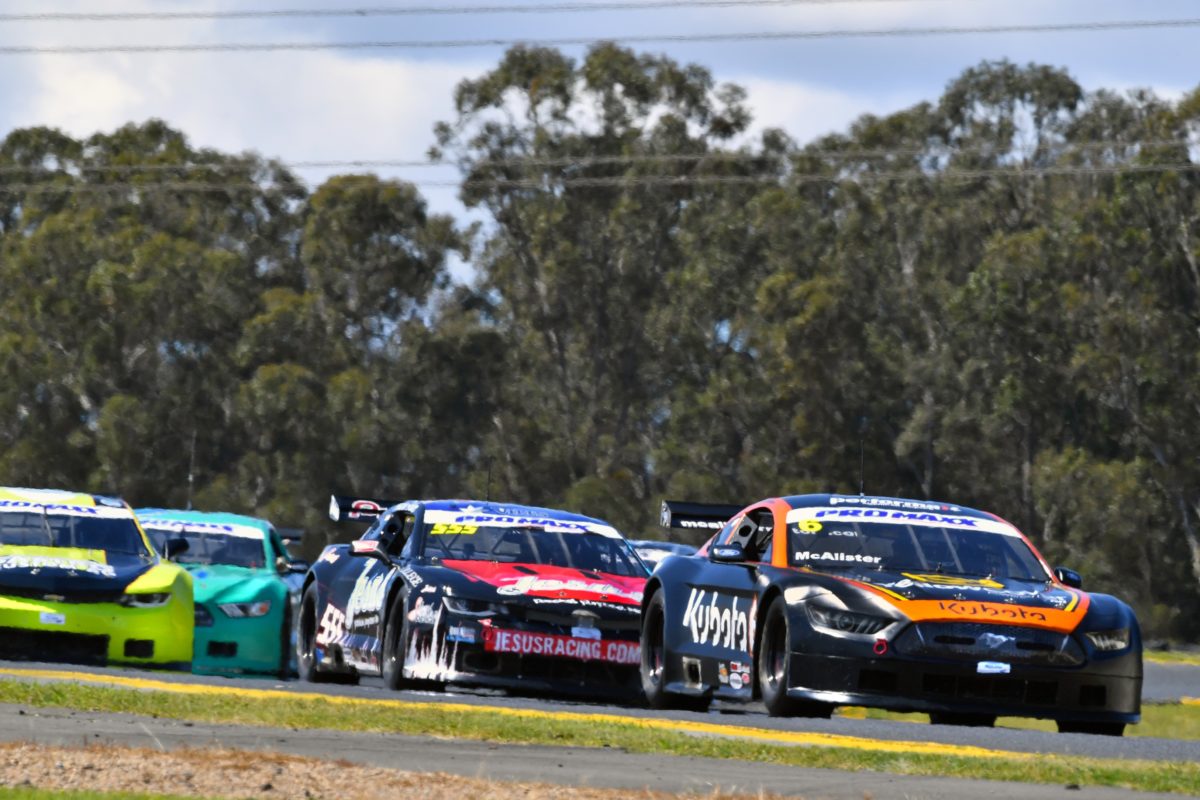 Race 3 began in dramatic fashion when Mark Crutcher and Craig Scutella tangled off the rolling start at Turn 1. Crutcher made a great start from the back of the pack before the pair touched on the entry to Turn 1. Fortunately both cars were repaired and rejoined the field for Race 4.

The race restarted on Lap 5 and there was a fight at the front with the top four stretching out their lead. Fisher and fellow TA2 debutant Zac Loscialpo were battling for second before Fisher was turned by Loscialpo coming onto the main straight with two laps remaining. Loscialpo was later handed a three-place grid penalty for the next race. McAlister took the chequered flag by two seconds ahead of Coulter, Graham Cheney, Loscialpo and Chris Formosa.

In Race 4, Fisher staged a strong recovery drive in the Jesus Racing Camaro as he charged back to the podium from sixth in the final race, setting the fastest lap of the race at a 1:38.0 in the process.

A Safety Car was called on Lap 3 with Mark Crutcher in the wall at the final corner, reporting a failure in the front-end. After the restart, TA2 debutant Zach Loscialpo and Graham Cheney made contact, with Loscialpo dropping behind Cheney in fifth. TA2 debutant Barry Kelleher retired on Lap 7 after a solid weekend in his Mustang.

The fourth and final race saw McAlister hold off Coulter on worn tyres in a terrific scrap for the lead to secure the round win.

The Promaxx Performance Exhausts TA2 Muscle Car Series will look at staging more events as border restrictions ease nationwide, with the next state of origin event planned for the AMRS round at Queensland Raceway on 23-25 October. 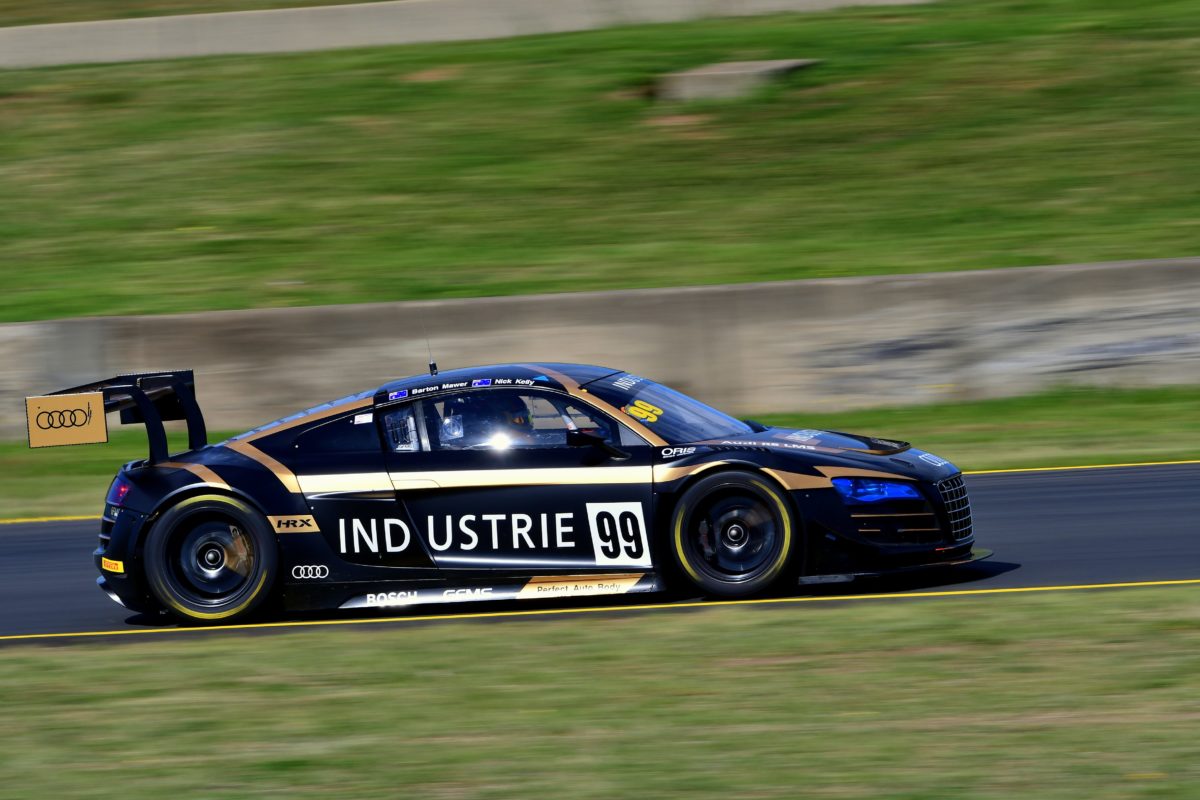 Nick Kelly and Barton Mawer have combined forces in an Audi R8 LMS GT3 to win the NSW Production Sports/Super GT one-hour endurance race, held at Sydney Motorsport Park as part of Round 2 of the Australian Motor Racing Series.

Kelly started the race and held second position behind Vince Muriti (Mercedes AMG GT3) in the opening stint, before a Safety Car was deployed just before the pit stop window opened to deal with a nasty crash involving the Porsches of Caspar Tresidder and Geoff Morgan.

The bulk of the field pitted for their compulsory stops during the Safety Car, with Muriti emerging in the lead and Mawer taking over the Audi R8 from Kelly.

When the race restarted, Mawer overtook Muriti but was passed for first place by Scott Fleming, who had taken over the Ford GT40 from Iain Pretty. While Fleming was able to hold out Mawer for a few laps, the speed of the Audi on warm tyres was ultimately too strong and Mawer powered to a decisive victory.

The MRF Tyres NSW Production Touring enduro produced a race-long battle between the Mitsubishi Evo IXs of Jack Winter and Hadrian Morrall/Tyler Mecklem. While Winter led the initial phases of the race, he was jumped in the pit stops by the Morrall/Mecklem entry. Winter was able to recapture the lead on track, but received a post-race penalty for a pit stop infringement, relegating him to second place. Dimitri Agathos (Subaru WRX STI) finished third. 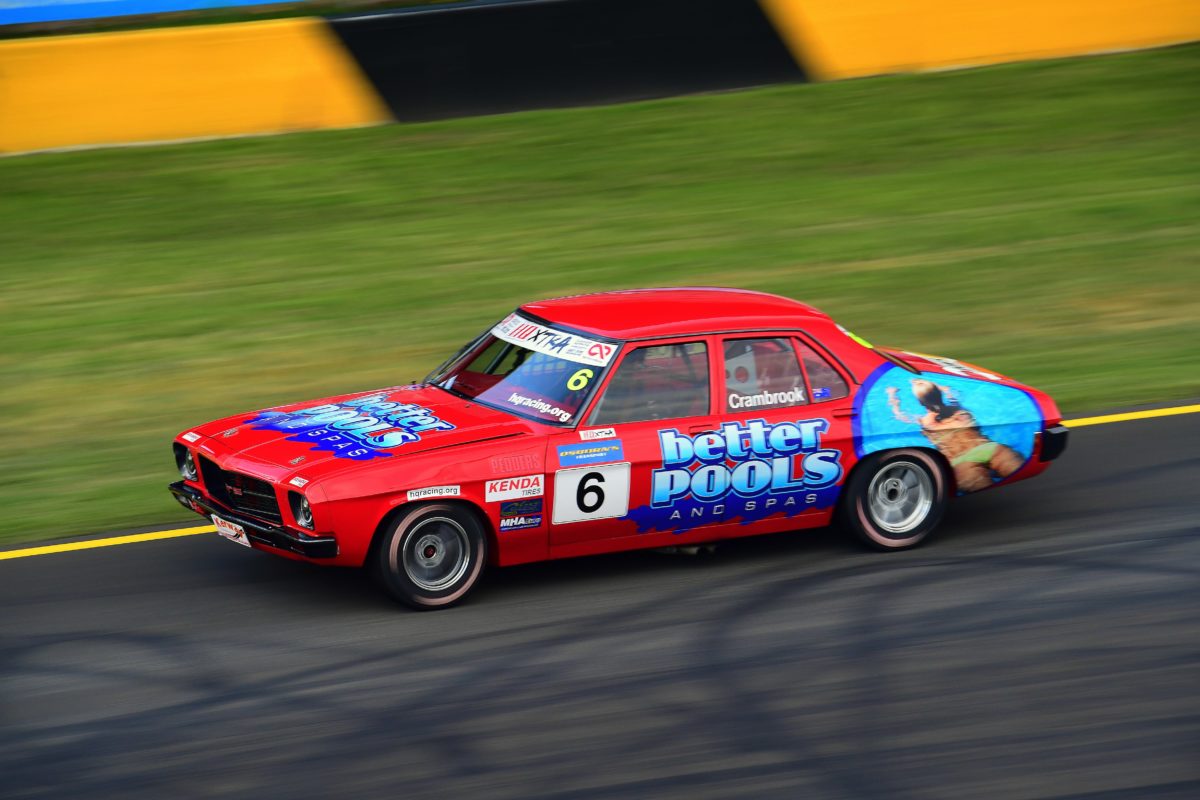 A lightning fast compulsory pit stop for Layton Crambrook was enough for him to win the HQ Xtra Cup one-hour endurance race.

Crambrook gained an advantage of more than 13 seconds over his main rival, Matt Barker, through the efficiency of his stop.

While left with a sizeable deficit to Crambrook after the pit stops, a relentless effort from Barker enabled him to close the margin to just 0.1s at the chequered flag, with Luke Harrison finishing third.

While he didn’t win either of today’s races, finishes of fourth and second (combined with his two victories yesterday) were enough for Justin Barnes to win the Mazda RX8 Cup round overall. Barnes was leading Race 3 before a tap from Brad Harris saw him spinning at the final corner; he dropped to fourth, with Harris penalised for the incident.

Shannon McLaine capitalised to pick up his first race win in the category ahead of Steve Devjak and Paul Grant-Mitchell.

Second for Barnes (ironically, behind Harris) in Race 4 was enough for him to seal the overall round victory.

Wayne Seabrook (Porsche 911) continued his domination of the Group S category with a comprehensive victory in Race 3 but did not start Race 4; that allowed Terry Lawlor (Shelby GT350) to take the overall round win ahead of Doug Barbour (Porsche 911) and Simon Meyer (MG Midget).