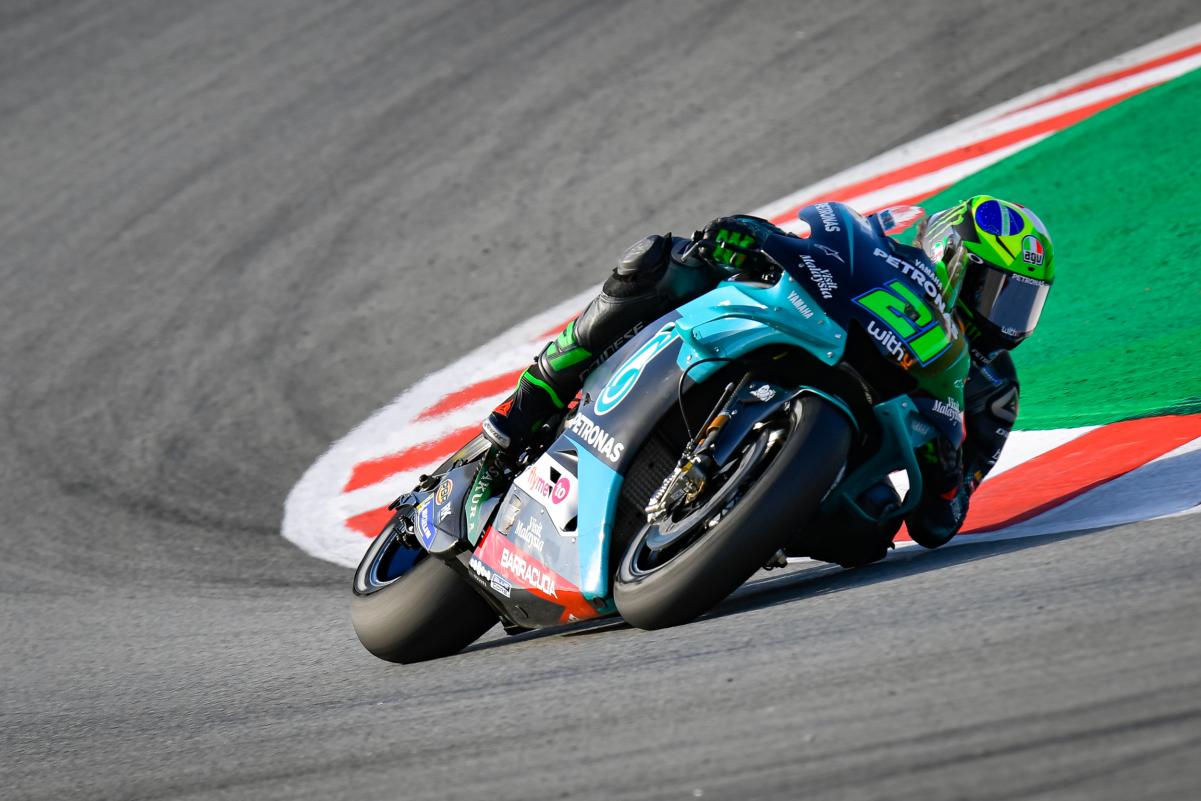 Franco Morbidelli has claimed a first MotoGP pole in a Yamaha front row lockout at the Catalunya Grand Prix.

Morbidelli was the only man to get into the 1:38s around the Circuit de Barcelona-Catalunya, edging Petronas SRT team-mate Fabio Quartararo out of top spot after the chequered flag.

Valentino Rossi put #46 into third just hours after his re-signing with Yamaha, and a place on the grid with SRT next year, was finally confirmed.

Jack Miller was the odd man out in a top five rounded out by Maverick Viñales, the Australian earning fourth on the grid with his Pramac Ducati after coming from Qualifying 1.

His championship-leading stablemate Andrea Dovizioso (Ducati Team), however, is mired all the way back in 17th.

Viñales (Monster Energy Yamaha) was fastest after the initial flyers with a 1:39.655s but Morbidelli was on top once the first runs were done on a 1:39.110s.

Having gone the long way, Miller opted to use his only remaining new soft rear Michelin for his first run, at the end of which he was second having clocked a 1:39.225s, ahead of Johann Zarco (Esponsorama Ducati), Viñales, Pol Espargaro (Red Bull KTM Factory), and Rossi.

Quartararo had made an early error but jumped off the bottom to take up second with a 1:39.192s at the start of his second run, then moved to provisional pole with a 1:39.008s on his next flyer.

The former would not be denied, however, as he laid down a 1:38.798s just after the chequered flag came out to bag a premier class pole for the very first time.

Miller had nothing left having had to undertake his second run with used tyres front and rear but his earlier effort stood up for fourth.

The fourth row is made up by Brad Binder (Red Bull KTM Factory), Q1 graduate Takaaki Nakagami (Idemitsu LCR Honda), and Miguel Oliveira (Red Bull KTM Tech3), the latter of whom had a mid-session crash at Turn 10.

Alex Rins (Suzuki Ecstar) was on to make it to Qualifying 2 until he was usurped by Nakagami well after the chequered flag and is set to start 13th, next to Francesco Bagnaia (Pramac Ducati) and Aleix Espargaro (Gresini Aprilia).

Castrol LCR Honda’s Cal Crutchlow ended up 16th and is due to share Row 6 with Dovizioso and Alex Marquez (Repsol Honda).