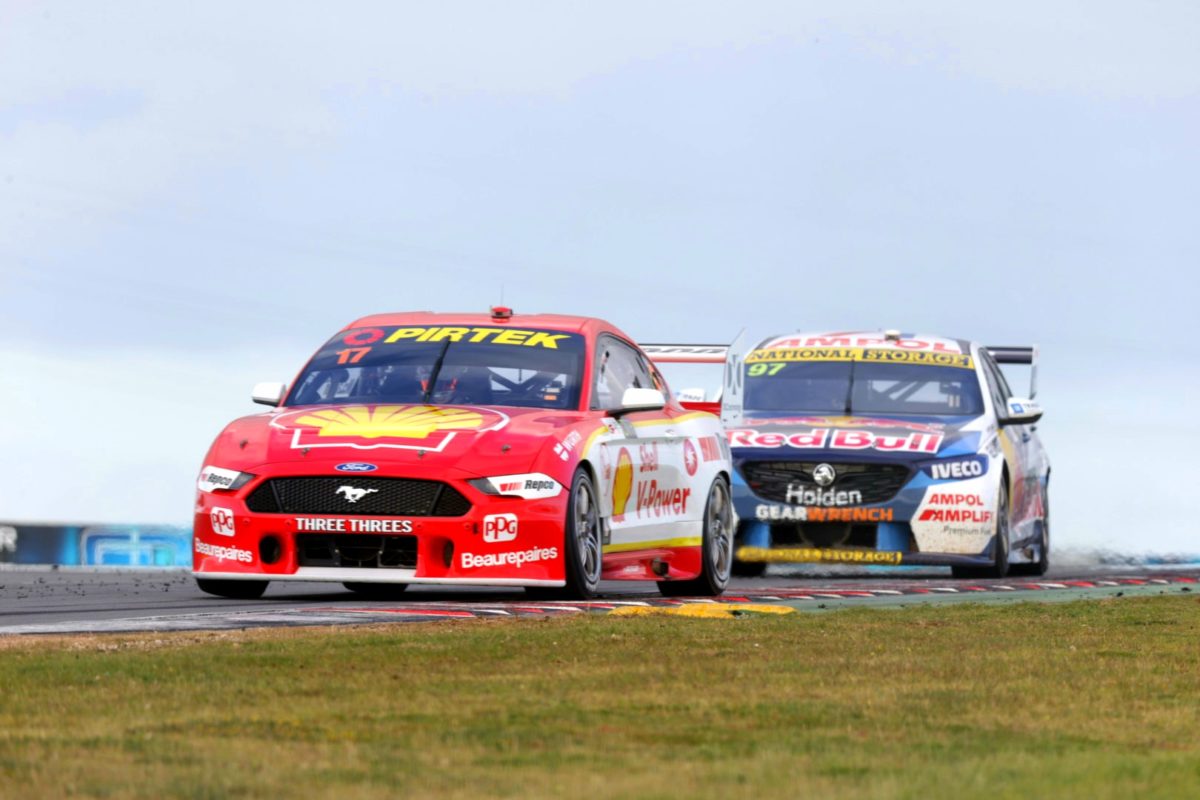 Scott McLaughlin has moved 263 championship points clear of Jamie Whincup with victory in Race 28 at the OTR SuperSprint The Bend.

The Shell V-Power Racing Team driver effectively led all 31 laps around The Bend’s West Circuit although he was kept honest in the closing stages by the Red Bull Holden Racing Team’s Shane van Gisbergen.

Whincup, the latter’s team-mate, finished 10th from 14th on the grid and can afford to give up no more than 36 points to McLaughlin over the remainder of the weekend if he wishes to remain a mathematical chance of claiming an eighth crown in 2020.

Cameron Waters completed the podium on the day in his #6 Monster Energy Mustang, almost six seconds further back from van Gisbergen and almost five seconds up on Tickford team-mate Jack Le Brocq, who guided his #55 Supercheap Auto Mustang to fourth.

A delayed start prompted an extra formation lap, before McLaughlin led the field to the first corner under race conditions.

Le Brocq made a tidy launch from the outside of the second row to sweep into second, while van Gisbergen (#97 ZB Commodore) wrested third from Waters as they negotiated Turn 3.

Whincup (#88 ZB Commodore) was 11th at the end of the standing lap, just ahead of Chaz Mostert (#25 Mobil 1 Appliances Online ZB Commodore) and Fabian Coulthard (#12 Shell V-Power Mustang) before the latter passed Mostert for 12th at Turn 1 on Lap 2.

Lee Holdsworth (#5 Truck Assist Mustang) got Mostert at the same spot on Lap 5 before he and Coulthard pitted together around three kilometres later.

Le Brocq was approximately three quarters of a second behind McLaughlin when he pitted on Lap 6 for fresh rear tyres, and DJR Team Penske responded by calling #17 in for the same next time around.

The pole-sitter resumed around three seconds up on his nearest pursuer as van Gisbergen took up the official race lead, which grew when Waters pitted on Lap 13.

Waters got out of the lane just over a second behind Le Brocq but soon closed up when Car #55 seemed to have some sort of brief engine issue through the Turn 6/Turn 7 complex.

Le Brocq suggested post-race that the drama was an airbox drama, a problem which affected another Tickford driver of sorts in Will Davison at the same location last year.

Van Gisbergen pitted on Lap 15 and rejoined with fresh rears a couple of seconds up on that Tickford duo, and a little more than three seconds behind McLaughlin.

Waters relieved Le Brocq of eighth, effectively third, on Lap 16 at Turn 12, before van Gisbergen set the fastest lap of the race on Lap 18.

Meanwhile, Whincup had just pitted and was passed by Coulthard for an effective ninth as he braked for the first corner on his out lap.

When Nick Percat (#8 R&J Batteries ZB Commodore) peeled off from the official lead on Lap 20, the compulsory pit stop cycle was complete.

Van Gisbergen caught McLaughlin for a first time on Lap 24, closing to near enough to three tenths behind, but could not make a serious challenge.

The margin ebbed and flowed for the seven laps which remained before the two-time champion won by 0.6473s over the 2016 champion.

“A lot better start than last Saturday, that’s for sure,” said McLaughlin.

“The pit stop from the guys was fantastic, really proud of everyone at Shell V-Power Racing.”

On his strategy, he said, “I think they wanted to cover off Jack. We’ll speak overnight, but I probably would’ve liked to go long, because I just sort of was getting used to the car, and the car was coming to me, the tyres in the first stint, so probably something we’ve got to look at for tomorrow.”

Percat put a move on Courtney on Lap 23 and they ran sixth and seventh thereafter, with Winterbottom holding eighth for the run home.

Coulthard finished ninth having staved off Whincup, who in turn had to cover Mostert in order to remain in the top 10.

David Reynolds got up to 16th after the #9 Penrite ZB Commodore was disqualified from qualifying for a parc ferme breach, while Jake Kostecki was the only retirement due to a rear main seal issue for the #34 Unit ZB Commodore.