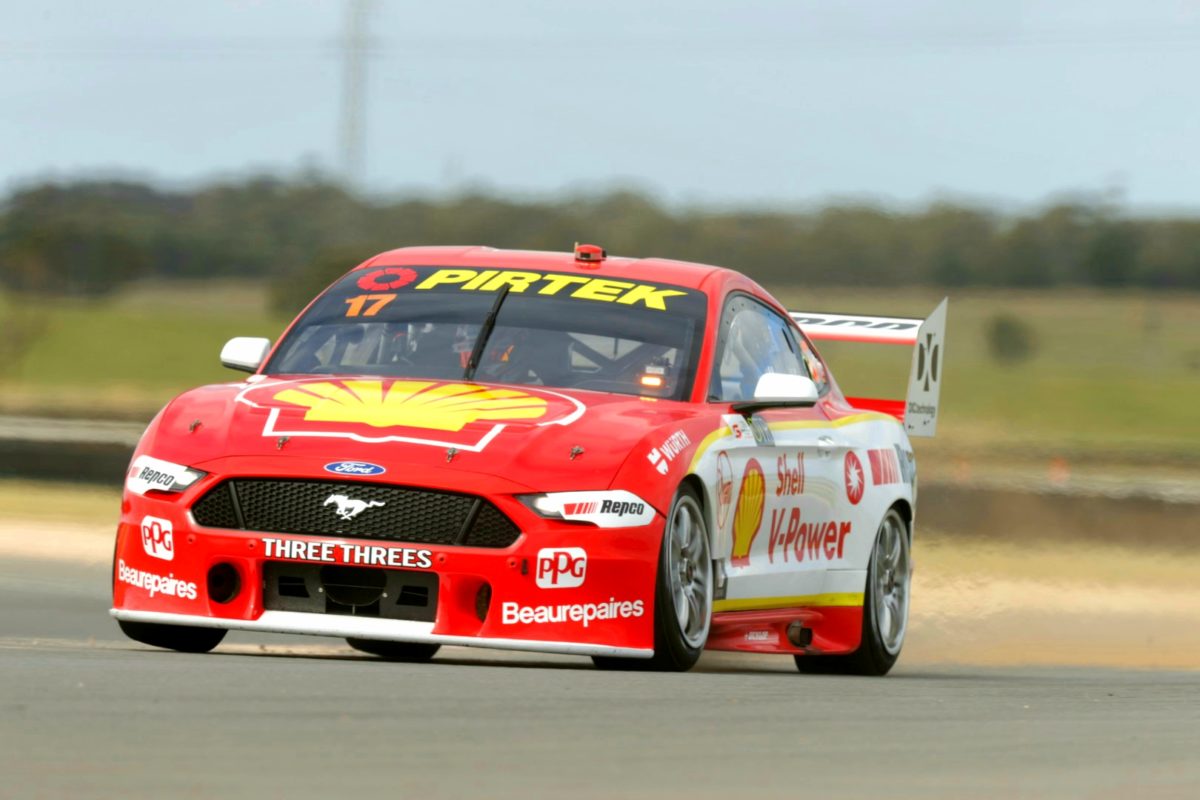 Scott McLaughlin has denied Cameron Waters pole position for Race 28 at the OTR SuperSprint The Bend by 0.0756s.

No one had got close to Waters’ tidy 1:15.2750s in the #6 Monster Energy Mustang until the second-last man onto the circuit, Shane van Gisbergen (#97 ZB Commodore), came up 0.1348s short and ended up third all told.

The Red Bull Holden Racing Team driver noted on his cool down lap that the track had been left dirty by an earlier driver but was by then cleaning up somewhat.

That was good news for McLaughlin, who set the fastest first sector and, despite understeer at Turn 6, had enough in reserve to stick the #17 Shell V-Power Mustang on pole with a 1:15.1994s.

“It was a good one,” said the championship leader.

“I nearly stuffed it at Turn 6, so I was lucky to pull it up, but luckily we were able to run a little bit wider there and use the new track limits which definitely helped.”

On the West Circuit layout which Supercars is using for the first time, he commented, “I actually enjoy it, I like it a lot.

“The big one’s fun, but this little one’s going to be a bit of a bullring for everyone.

“I think the racing is going to be really interesting, so best spot to start is pole position, and we’ve done that now.”

The very biggest gain went to Waters’ team-mate, Jack Le Brocq, who was first onto the track for the shootout and set a 1:15.5956s to put the #55 Supercheap Auto Mustang fourth on the grid.

Another Tickford driver in James Courtney clocked a 1:15.6010s which leaves the #44 Boost Mobile Mustang fifth for the start of Race 28 and alongside Anton De Pasquale, who achieved a 1:15.6319s in the #99 Penrite ZB Commodore.

Mark Winterbottom, with four roaded tyres on the #18 Irwin Tools ZB Commodore, grabbed seventh spot with a 1:15.6631s and Nick Percat clocked a 1:15.6687s in the #8 R&J Batteries ZB Commodore to claim eighth.

Andre Heimgartner (#7 Ned Mustang) beat the time that earned him passage to the one-lap dash with a 1:15.6910s but still ended up slowest after the first five cars had been out.

However, he wound up a net unchanged 11th due to the struggles of a number of regular front-runners who followed.

Chaz Mostert was provisionally fourth but ended up 12th having clocked a 1:15.7898s in the #25 Mobil 1 Appliances Online ZB Commodore.

Roaded fronts or even roaded tyres on all four corners were popular choices in the frigid conditions but Fabian Coulthard, like Whincup, was reportedly sent on four green tyres.

The Shell V-Power Racing Team driver slipped from a provisional fifth to 15th with a 1:15.9711s on a lap in which his #12 Shell V-Power Mustang appeared to want for grip.

Lee Holdsworth was also unhappy with his lap, but qualifying 13th on a 1:15.8082s represented a drop of only three spots from his provisional position in the #5 Truck Assist Mustang.

David Reynolds fell at the first hurdle in Qualifying for Race 28 and finished 21st before the #9 Penrite ZB Commodore was placed under investigation for an alleged parc ferme breach.

The latter effort was set despite the appearance of light rain with two minutes remaining in Part 2, which also appeared no major trouble for the other big guns who waited to set a time, namely Whincup and Coulthard.

In Part 1, Reynolds had been shuffled back to 20th during the chequered flag period before Davison jumped six spots to 15th.

Race 28 of the Virgin Australia Supercars Championship is scheduled for 15:40 local time/16:10 AEST, with 32 laps the journey.