‘Significant other’ rule introduced for Bathurst 1000

‘Significant other’ rule introduced for Bathurst 1000 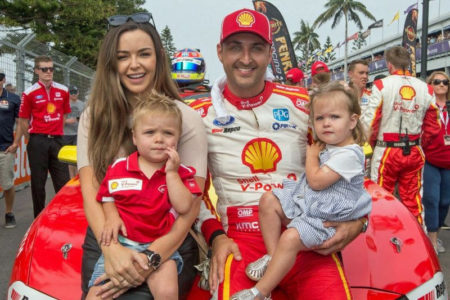 Fabian Coulthard with fiance Becky Lamb and their children

Drivers will each be allowed one registered ‘significant other’ who will have permission to enter the Supercars Championship paddock at this year’s Supercheap Auto Bathurst 1000.

The final event of the 2020 Virgin Australia Supercars Championship will see an increase in personnel limits which were first introduced for the resumption of competition in June and have been changed only slightly since.

While a host of COVID-19 measures remain in place, a number of additional freedoms have been granted for the Great Race, including a specific allowance for families of drivers.

The supplementary regulations state, “For this Event, the Driver and the additional Driver for each REC are permitted access for one (1) significant other, who will be authorised access to the VCS paddock and the front 50% of the Teams garage.”

Children are also allowed, so long as they attend with the significant other, with all of those people needing to be registered on the personnel form.

The supplementary regulations for the Supercheap Auto Bathurst 1000 also state, “Access to the VASC Paddock will be restricted to Main Game teams (as per the approved D24. Notification of Endurance Performance Personnel Form (F.13)) and approved staff, broadcasters, media and contractors.”

By way of contrast, while the requirement for registration on the performance personnel form is required for paddock access at this weekend’s OTR SuperSprint The Bend, there is no allowance for significant others and/or children to be listed on that form.

Access to the Mount Panorama Supercars Championship paddock will only be granted to those who have the relevant sticker attached to their lanyard.

The Performance Personnel allocation has been increased from 11 to 12 people per two-car team, and the Non-Performance allocation from one to four.

Social distancing requirements remain in place, as does the nomination of a COVID-19 Compliance Officer for each team.

Supplementary Regulation 4.1.7 states, “There will be a requirement for any person who resides in certain areas of NSW (and/or visited a location of possible contact) in the lead up to the Event to undertake asymptomatic COVID-19 testing.

“Further information will be sent to all Teams under separate cover.”

The wearing of masks is currently not mandatory.

However, team members are still not allowed access to corporate facilities and are only allowed to use the toilets on the ground floor of the pit complex.

There will be an extra hour of practice relative to last year’s Bathurst 1000, with half of that addition dedicated to co-drivers only.

Tim Schenken has been named as the Race Director, having missed all events after the first Sydney SuperSprint due to the New South Wales-Victoria border closure.