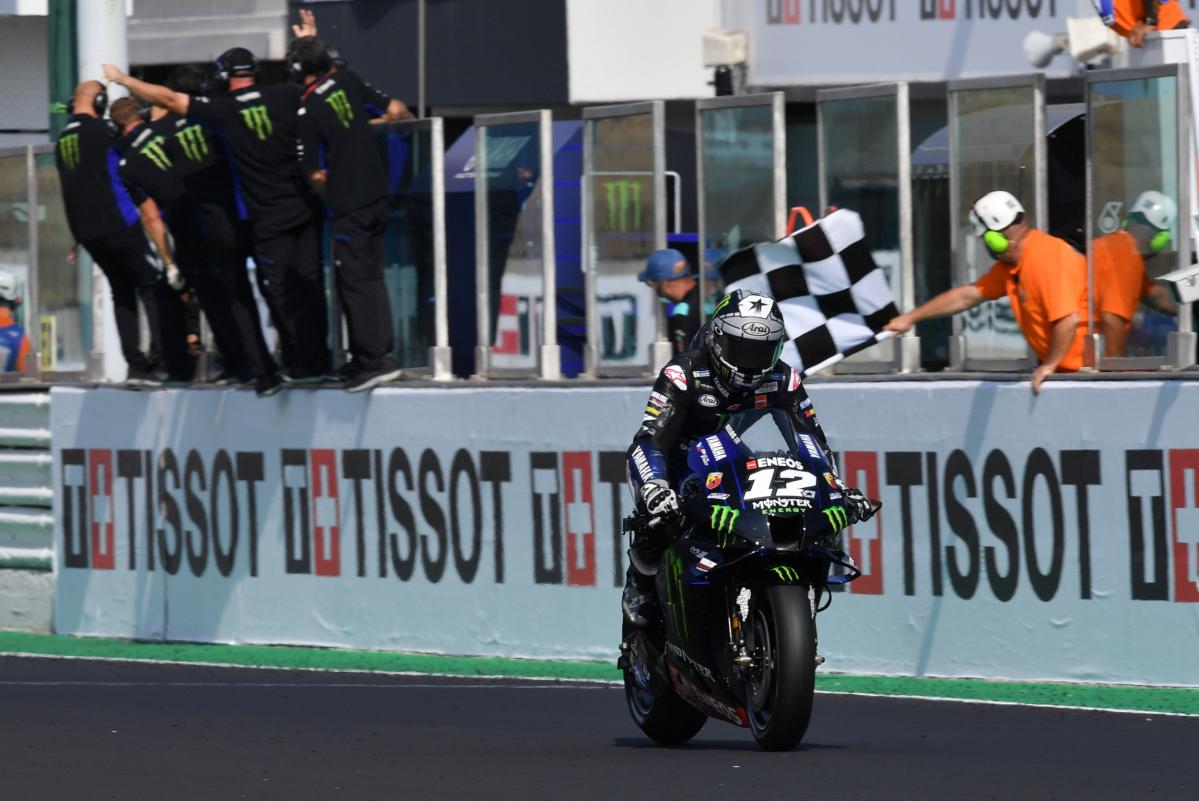 Maverick Viñales has won the Emilia Romagna MotoGP after Francesco Bagnaia crashed out of the lead less than seven laps from home.

Bagnaia and Viñales had run first and second respectively for more than half of the 27-lap encounter and the Pramac Racing rider still had more than one second in his pocket when he dropped his Ducati at Misano’s Turn 6.

The spill left the #12 Monster Energy Yamaha with a lead of over four seconds and the Spaniard was able to cruise home to a first win of the season.

Suzuki Ecstar’s Joan Mir came from 11th on the grid to finish second and KTM’s Pol Espargaro was elevated to the podium when Fabio Quartararo was issued a late long lap penalty, which the Petronas SRT Yamaha rider did not take and instead had three seconds added to his race time.

The penalty, apparently for exceeding track limits, was the difference between regaining the championship lead and still trailing Andrea Dovizioso.

The Ducati Team rider was only eighth after being as low as 13th at the end of Lap 1 but remains on top of the table, by a single point.

Jack Miller was a DNF with a suspected engine problem, although by then he had already slumped to the back end of the top 10.

The Queenslander had taken the start despite a sizeable highside in the Warm Up session and led the field away from the middle of the front row before pole-sitter Viñales reclaimed top spot at Turn 4.

Bagnaia got by fellow Pramac rider Miller early on Lap 2, just before Rossi crashed out of seventh at Turn 4.

Binder had rounded up Quartararo at Turn 4 and went underneath Miller at Turn 9/Turn 10, but threw away his newly acquired third position when he lost the front of his RC16 at Turn 14.

By then, Pol Espargaro had passed Quartararo and both went through on Miller when he ran wide through Turn 13, meaning they inherited third through fifth respectively after less than two complete laps.

Viñales was around 0.7s up on Bagnaia at the end of Lap 2 but was reeled in over the next handful of laps before surrendering first position when he ran wide at Turn 4 on Lap 6.

Mir made up ground early on from the fourth row of the grid, passing Danilo Petrucci (Ducati Team) for sixth on Lap 4 and Miller for fifth on Lap 6.

Miller pitted at the end of that tour with a suspected engine problem while Bagnaia was enjoying contrasting fortunes as he moved his advantage over Viñales past a second for the first time on Lap 10.

Meanwhile, Mir was gnawing away at the gap to Quartararo, who still held fourth, while Miguel Oliveira passed Tech3 team-mate Lecuona for sixth as they went into Turn 8 on Lap 14.

Bagnaia continued to circulate with around that margin over Viñales, who was three seconds up on Pol Espargaro and pulling away, but Quartararo was back within a second of the latter on Lap 17.

On Lap 20, #44 and #20 were back together, making for a battle for the final podium place as it stood, while Viñales was chipping away at the race leader.

The gap was just over a second when Bagnaia went down at Turn 6 on Lap 21, giving first spot to the factory Yamaha rider, as Quartararo applied the pressure to Pol Espargaro a few seconds behind.

Quartararo received a track limits warning on Lap 22 and when he could not fashion a pass on Pol Espargaro, Mir jammed his Suzuki down the inside of the #20 Yamaha at Turn 2 on Lap 25.

Mir got Pol Espargaro at the start of Lap 26 and Quartararo followed at Turn 3, shortly before word came through that the Frenchman would have to tour the long lap.

He did not at the only opportunity which remained, taking the chequered flag in third but being officially classified in fourth.

For Viñales, however, there was obvious jubilation after struggling in race conditions yet again at the same circuit a week earlier, while Mir equalled his best premier class grand prix finish.

Alex Marquez ended up seventh, ahead of Dovizioso and Franco Morbidelli (Petronas SRT Yamaha), the latter of whom had dropped to last when he was caught up in Aleix Espargaro’s (Gresini Aprilia) crash at Turn 8 on Lap 1.

Danilo Petrucci (Ducati Team) rounded out the top 10 in a race started by only 20 and finished by only 13.

Among those seven who did not see the chequered flag was Binder after the South African crashed a second time on Lap 4.

The head of the championship is now Dovizioso on 84 points, from Quartararo and Viñales on 83 each, while Miller is 20 points off the pace in sixth.

The Catalunya MotoGP will take place next weekend (September 25-27).