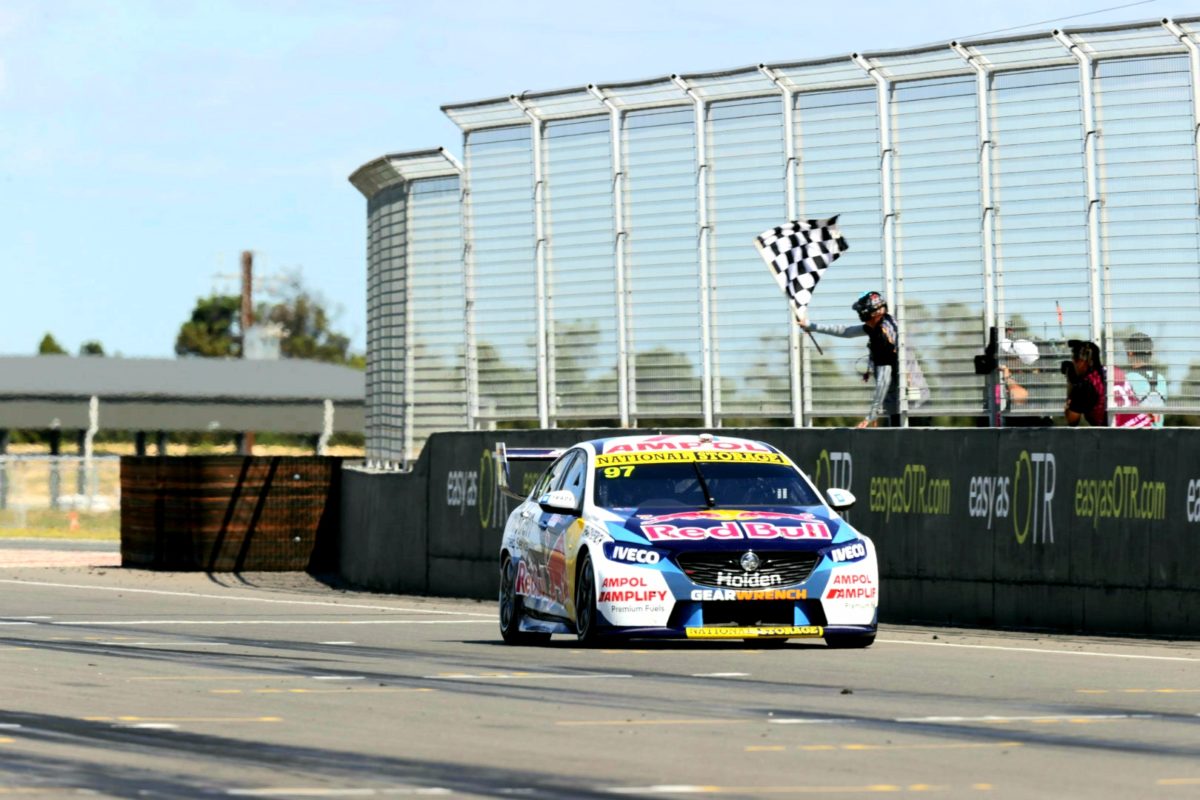 A disciplined Shane van Gisbergen has claimed victory in Race 26 at the Repco SuperSprint The Bend while Jamie Whincup’s title hopes took a blow with a pit stop drama.

Van Gisbergen ceded the lead in the pit stop cycle but had set himself up to take advantage of his early tyre conservation and quickly pick off both Chaz Mostert and Scott McLaughlin.

The Red Bull Holden Racing Team driver eased to a win of just over one second, but team-mate Whincup ended up 17th after a spike issue in his compulsory pit stop.

Kelly Racing’s Andre Heimgartner finished second at just over a second back while McLaughlin rounded out the podium.

When the lights went out, Fabian Coulthard made a noticeably strong start from the second row but found another DJR Team Penske Mustang in his path as he moved to the very inside of the circuit.

Van Gisbergen (#97 ZB Commodore), however, was able to sweep in the lead from the outside at Turn 1, ahead of pole-sitter McLaughlin (#17 Mustang), Coulthard (#12 Mustang), Mostert (#25 Mobil 1 Appliances Online ZB Commodore), Cameron Waters (#6 Monster Energy Mustang), and Heimgartner (#7 Ned Mustang).

Mostert had a big dive at the two DJRTP Fords at Turn 6 on Lap 2 but Coulthard was able to keep him at bay, as a train of cars followed van Gisbergen.

The Triple Eight Race Engineering pilot appeared to be managing his pace having struggled with tyre wear late in the preceding afternoon’s encounter, but moved to three quarters of a second clear of McLaughlin after five laps.

That was when Mostert pitted for fresh working side tyres, and he was followed into the lane by Heimgartner.

McLaughlin peeled off a lap later for working side tyres and rejoined just behind Mostert at the merge, as van Gisbergen turned up his pace slightly with the then-fastest lap of the race on Lap 7.

Mostert quickly took that mantle off him but #97 was continuing to set personal best sectors and laps.

The 2016 champion was almost 38.5s up on Mostert when he finally pitted at the end of Lap 13, essentially an even tyre strategy in what was a 24-lap race, and while the change of rear tyres was clean, he had to file behind the barely separated #25 and #17 cars in the Turn 1 braking zone.

Van Gisbergen wasted no time in regaining those positions, giving McLaughlin two nudges off Turn 3 and into Turn 4 before a dive at Turn 6 which the championship leader did not try and resist.

The Triple Eight driver picked off Mostert at the start of the next tour, Lap 15, prompting McLaughlin to set the gunsights on the Walkinshaw Andretti United machine.

McLaughlin jinked left off Turn 5 but as he went down the inside of Mostert at the hairpin, Heimgartner made it a three-wide move and passed both.

That allowed van Gisbergen to skip almost three quarters of a second clear and Heimgartner established a comfortable enough gap over McLaughlin, while Mostert began to give up handfuls of pace.

Waters, Coulthard, and Nick Percat (#8 R&J Batteries ZB Commodore) all passed Mostert before the lap was out, with Rick Kelly (#15 Castrol Mustang) and Anton De Pasquale (#99 Penrite ZB Commodore) relegating him further as they ran up the main straight.

Van Gisbergen stretched his lead past a second for the first time proper on Lap 16 and was almost two seconds to the good over Car #7 after 20 laps.

From there, he managed the margin again and ultimately eased to a 1.1462s victory, while McLaughlin finished a further 0.7278s back from Heimgartner to complete the podium.

“What a turnaround from yesterday; we had no tyre life and kept blistering them,” noted van Gisbergen.

“We struggled at the start, taking them easy, and then the car came alive and came out in the battle; really cool.”

Coulthard came home with a wet sail to take fourth, having passed Percat on Lap 21 and then Waters on Lap 23.