The #7 pulls into the pits pic: Toyota Gazoo Racing

Misfortune again struck the #7 Toyota at La Sarthe as it surrendered the lead of the 24 Hours of Le Mans due to a turbo issue just after the halfway mark.

It marked another heartbreaking Le Mans drama for the #7 crew, which has seen the overall win fall to the #8 the last two years.

The #7 was leading in 2019 before Jose Maria Lopez slowed in the 23rd hour due to a wired tyre pressure sensor system, which incorrectly indicated a tyre puncture that was later found to be fine.

The #8 still managed to defeat the #7 in 2018 despite Sebastien Buemi taking a one-minute stop-and-go penalty for speeding in a slow zone that was triggered for an accident during the night.

Three years ago, Porsche ran away with the victory after the leading #7 suffered a clutch failure 10 hours in and failed to return to the pits under hybrid power, forcing its retirement.

However, few heartbreaks will rival that of 2016 when the Japanese manufacturer, then on course to finally seal an elusive first Le Mans win after four runner-up finishes, lost the race on the penultimate lap. That day, Kazuki Nakajima suffered a problem and stopped on the pit straight, handing the win to Porsche.

Saturday’s race start looked bright for the #7 as Mike Conway led away from pole, with the Briton creating a comfortable buffer over the sister #8 entry. 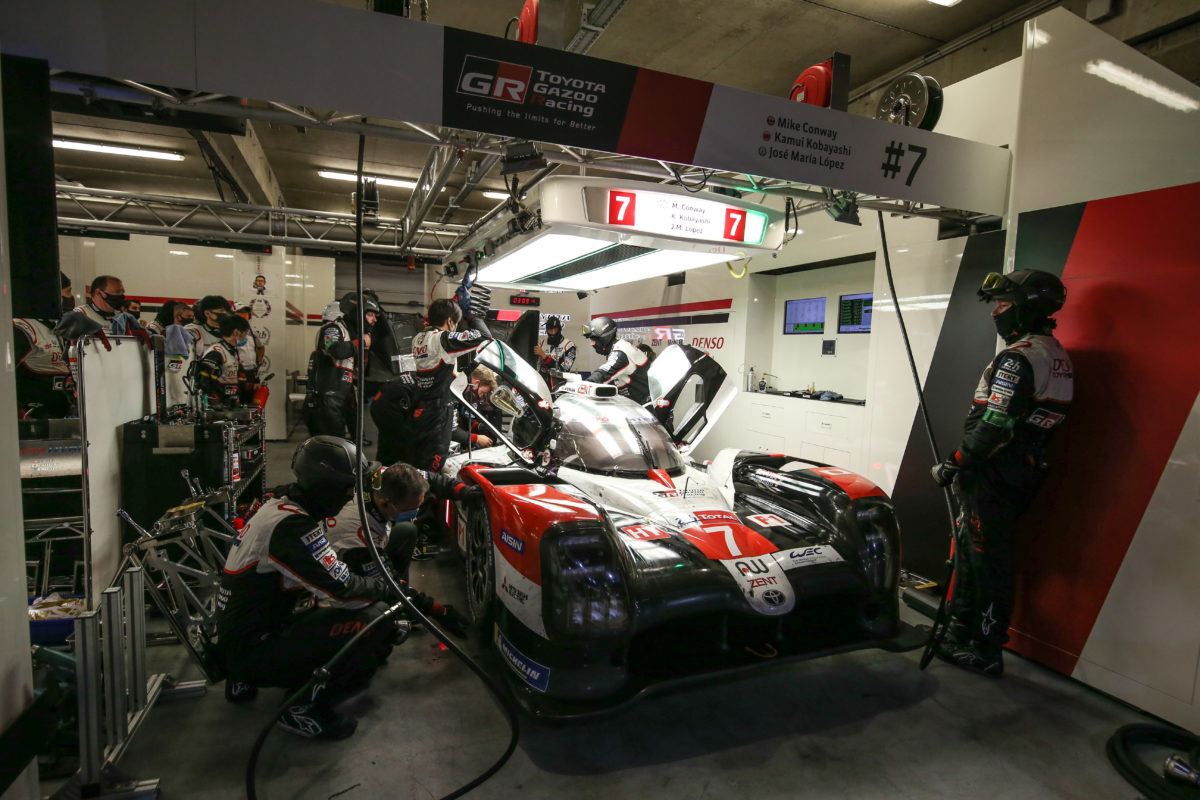 The first quarter of the race was fraught with drama for the #8, with Buemi pitting towards the end of the first hour with a suspected tyre puncture before it was later wheeled into the garage with a brake issue.

That left the #7 on its own in the lead, with the two Rebellion privateer entries overtaking the #8 when it rejoined the race.

To the 12-hour mark, Kamui Kobayashi enjoyed a one-lap lead over the #8 Toyota of Brendon Hartley, before the race was flipped on its head when the pit wall sent a jarring message to the #7.

Kobayashi was informed about a possible problem with the right-hand side turbo, and the #7’s lap times dropped below the 3:30s bracket shortly after.

At 02:41 local time, just over 12 hours after the race began, the #7 was dragged into the garage and underwent frantic repairs.

With the #8 having already cleared both Rebellions, the #7 again saw the race fall the way of the sister car as mechanics desperately tried to replace the failed turbo.

Kobayashi returned to the race 29 minutes and 47 seconds later at 03:10, but had dropped seven laps off the lead #8 and behind both Rebellions.

American Gustavo Menezes was promoted to second in the #1 Rebellion, with teammate Romain Dumas three laps off the lead in the #3 Rebellion.