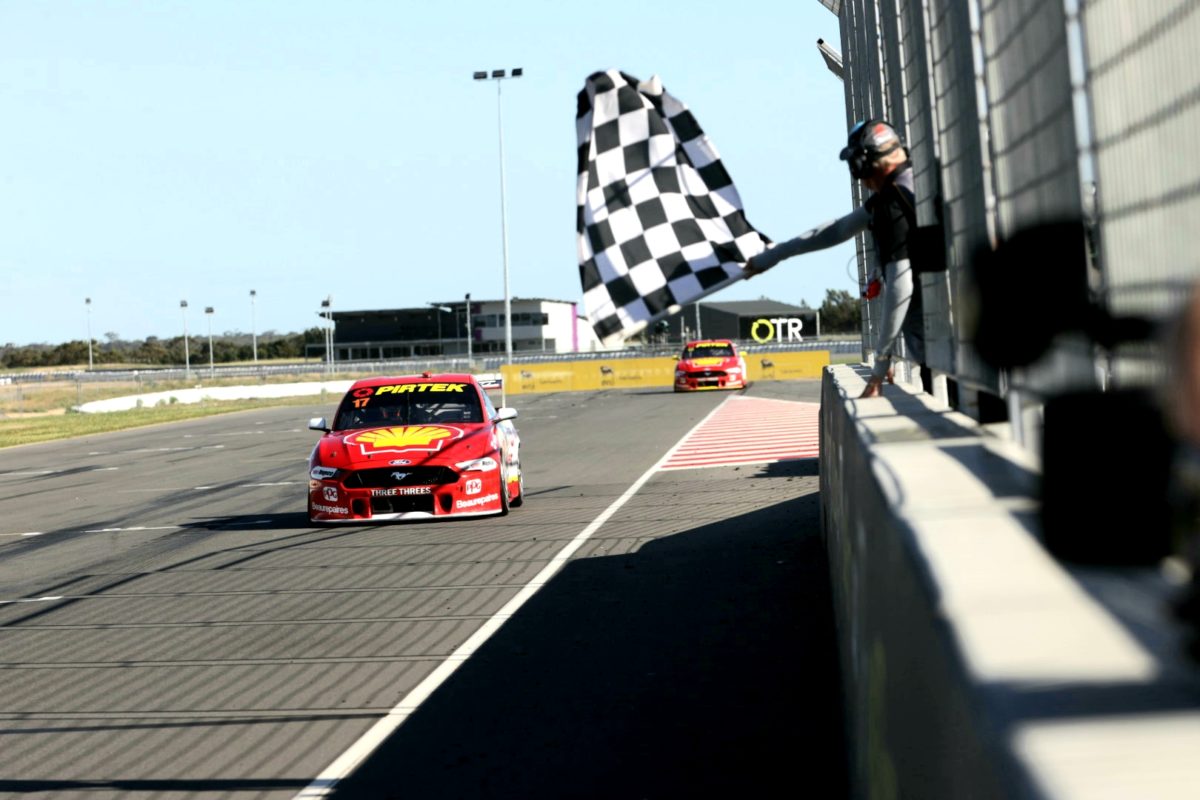 McLaughlin took victory by just over two seconds from Fabian Coulthard in Race 27 at the Repco SuperSprint The Bend, while Jamie Whincup finished third in his Red Bull Holden.

As such, the latter’s deficit to the race winner at the head of the standings is now 215 points with another 600 on offer in the two events which remain in 2020.

“I think we’re first and third for the weekend and a one-two today, so (I’m) proud of Fabs’ effort,” said McLaughlin.

“Car #12 has been on the receiving end of a few bad runs (but) he hasn’t forgotten how to drive obviously, so he’s bloody awesome, a great team-mate.

“The car is fantastic to drive, a pleasure to drive, and I’m really proud of everyone at Shell V-Power Racing, to be able to bounce back after yesterday.”

Shane van Gisbergen ended up 14th in the second RBHRT entry after a penalty for spinning Andre Heimgartner, who fought back to fifth in his #7 Ned Mustang.

McLaughlin (#17 Mustang) led the field away from pole while Coulthard (#12 Mustang) launched into second position from the outside of the front row.

Heimgartner dived past Cameron Waters (#6 Monster Energy Mustang) to take seventh position at the Turn 6 hairpin, but an attempted move on van Gisbergen just before the standing lap was out had far less desirable consequences.

The Kelly Racing pilot went down the inside of the Race 26 winner at Turn 17 but had not fully cleared him when van Gisbergen turned in and tipped the #7 Mustang into a spin.

Heimgartner plummeted to 22nd while Car #97 continued in sixth position before being handed a 15-second time penalty for a driving infringement.

Whincup passed Percat for fourth at Turn 18 on Lap 7, moments before the Brad Jones Racing driver pitted to change rear tyres, the left of which was badly blistered.

Coulthard was approaching four seconds in arrears of his race-leading DJR Team Penske team-mate when he pitted after 10 laps for working side tyres, before Whincup passed Mostert for a nominal second at Turn 6 on Lap 11.

The Walkinshaw Andretti United driver appeared to be struggling for tyre life again as van Gisbergen also got by at the start of Lap 12, then Scott Pye (#20 DeWalt ZB Commodore) and Waters at Turn 6.

McLaughlin, Waters, and Mostert pitted at the end of that lap, the former resuming a few seconds up on Coulthard having taken fresh rear tyres, with Anton De Pasquale (#99 Penrite ZB Commodore) next of the stoppers after peeling off from an effective 10th on Lap 8.

Waters emerged behind De Pasquale, Percat, and Heimgartner, the latter of whom had also taken service and already made something of a recovery.

Whincup was in on Lap 14 from the official lead, which fell to van Gisbergen before he was overtaken by Pye a corner later.

Car #88 resumed behind De Pasquale in an effective fourth, while van Gisbergen ran a lap longer and Triple Eight elected to change all four tyres given he would have the hold added anyway.

When Pye and Todd Hazelwood (#14 TRG Transport ZB Commodore) stopped on Lap 16, the cycle was complete.

Coulthard brought McLaughlin’s advantage under two seconds with a touch over four laps remaining but hardly got any closer thereafter, with the two-time champion effectively leading all 24 laps.

The final podium position did, however, change on Lap 21.

Whincup had just nearly taken out De Pasquale when he locked up and touched Car #99 at Turn 6 but fanned the throttle and made the move cleanly 11 corners later.

Waters finished fifth and Pye rose to sixth, ahead of Heimgartner, Kelly, Reynolds, and Hazelwood.

Van Gisbergen finished 14th having resumed last of those still running in 22nd after his long pit stop, while Mostert faded to 16th and Percat to 17th.

Reynolds had made contact which sent Jack Brocq (#55 Supercheap Auto Mustang) spinning, with both appearing to tag Winterbottom as a result.

The Team 18 driver glanced Courtney as he then rotated, sending #44 around also, with both immediately retreating to their garages and not reappearing.

Not only has McLaughlin tightened his grip on the drivers’ championship, DJRTP now leads Triple Eight by 104 points.

The OTR SuperSprint The Bend takes place next weekend on the venue’s West Circuit layout.