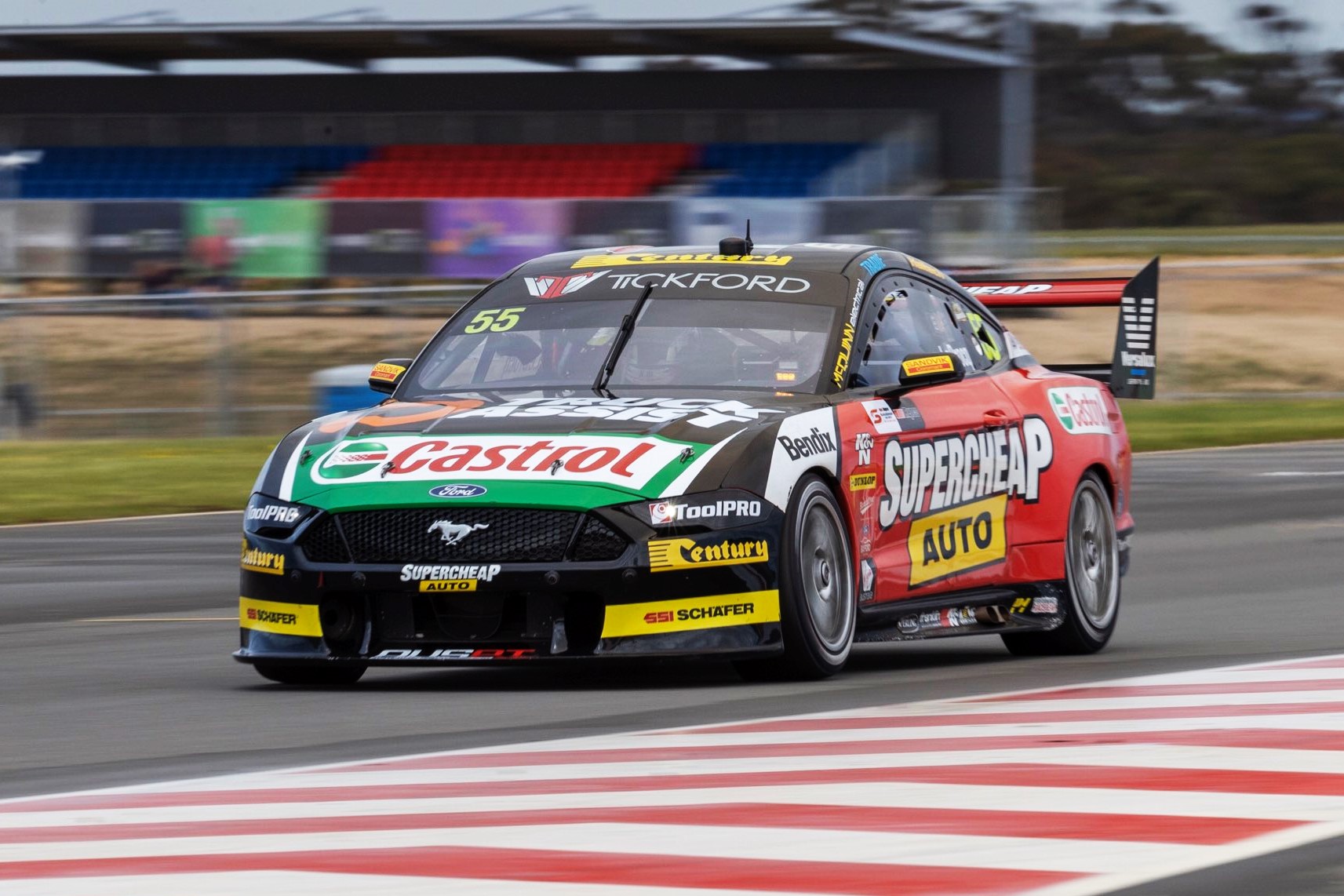 Supercheap Auto Racing driver Jack Le Brocq said he ‘rightly deserved’ a blow-up from his engineer after he failed twice to pass Shane van Gisbergen around the outside.

The Tickford Racing driver was among those to pit on Lap 5 from fifth place and undercut his rivals to move up to second once the order was corrected.

A battle for the lead with the Red Bull Holden Racing Team’s Shane van Gisbergen ensued, which brought Coulthard, Lee Holdsworth, and Scott McLaughlin into the frame.

Le Brocq sought to make a move on van Gisbergen at Turn 17 on Lap 18 with a pass to the inside, but the criss-cross from van Gisbergen saw the Tickford Racing stuck on the outside.

As a result, van Gisbergen forced Le Brocq out wide at the final corner. The 28-year-old dropped all four wheels off onto the dirt and in turn lost a position to Coulthard too.

Despite high tyre wear, Le Brocq was able to move back into second place with a dive-bomb pass on Coulthard at Turn 6 with three laps to go.

As van Gisbergen’s tyres faded, Le Brocq tried to make another pass on that same lap, again going to the outside at Turn 17 and once more getting hung out to dry.

Le Brocq lost out to Coulthard again, the latter making quick work of van Gisbergen to take the lead, resuming the battle between Le Brocq and the former race leader.

Le Brocq’s engineer Brad Wischusen was quick to jump on the radio, issuing a terse piece of advice.

“Jack, not the outside mate, come on,” he said.

Eventually, the Tickford pilot found his way through to second place at Turn 3, but ultimately couldn’t catch Coulthard for the win.

Speaking after the first race at the Repco SuperSprint, Le Brocq said he deserved to cop the ‘blow up’ from his engineer.

“It was pretty funny. I’ve never heard him blow-up before,” Le Brocq said, laughing off the incident.

“I was a bit taken aback by it. It’s all good, I think it was rightly deserved.”

Asked whether he had learned anything from the on-track battle, Le Brocq said, “The biggest one is don’t go to the outside and do it twice in a row.

“You would think I would have learned from the first time, but I’m obviously a slow learner.”

Le Brocq was nevertheless pleased with what was only his second podium in the Virgin Australia Supercars Championship.

Earlier this year he won at the second of the Sydney SuperSprint events.

“I’m a bit annoyed with myself for placing the car in the wrong spot but we’ll take a P2 any day of the week,” said Le Brocq.

“Awesome job by the guys and yeah, stoked.

“I probably had the car to win today so it’s a bit frustrating for me but I’m still over the moon.

“It’s an awesome result for the team and I’m loving it.”

Supercars is back on track from 09:20 local time/09:50 AEST at The Bend Motorsport Park for a pair of 10-minute qualifying sessions.