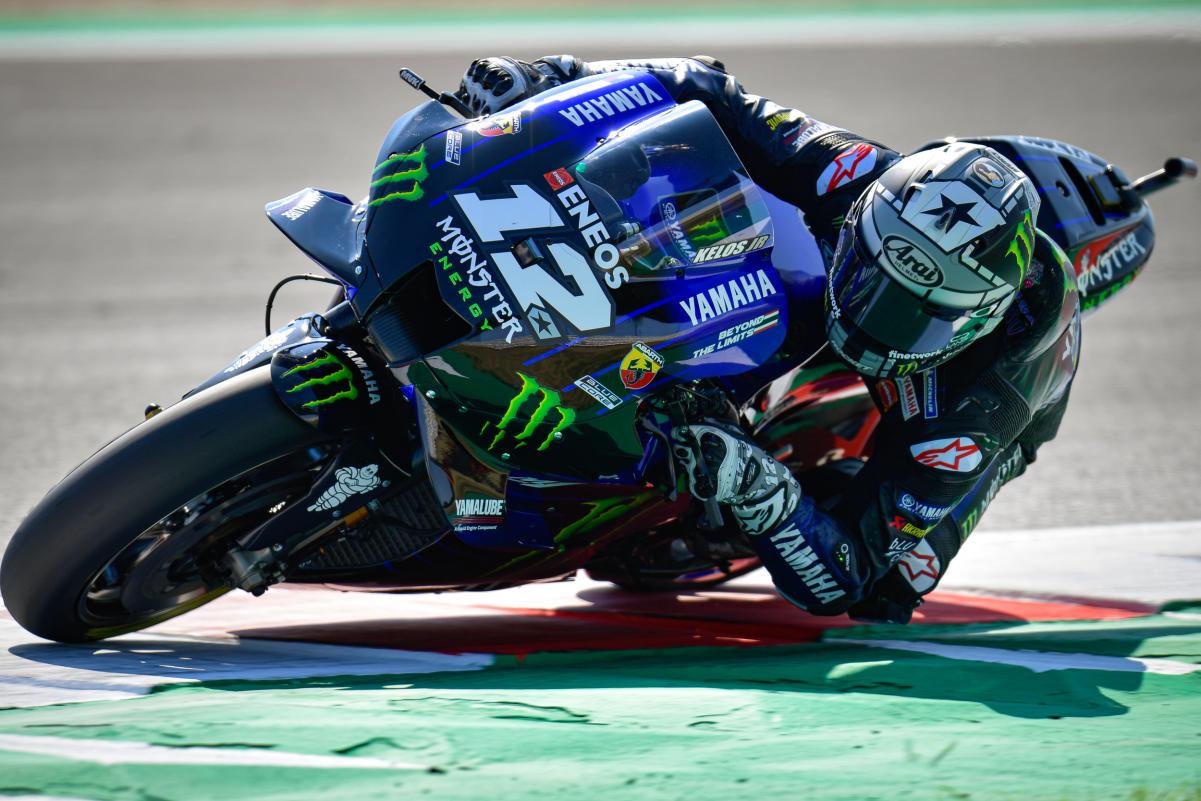 Francesco Bagnaia unofficially set the fastest lap of 1:30.973s just after the chequered flag but the Pramac Ducati rider’s effort was cancelled for exceeding track limits at the final corner.

Instead, it will be Monster Energy Yamaha’s Viñales on pole with his subsequent 1:31.077s, alongside Miller (Pramac Ducati) and Fabio Quartararo (Petronas SRT Yamaha).

Bagnaia initially dropped to fourth with the loss of lap time before a very late flyer from Red Bull KTM Factory Racing’s Pol Espargaro relegated the Italian to the middle of the second row, which they will share with the other works KTM of Brad Binder.

Bagnaia set the pace through the first runs with a 1:31.313s, from Quartararo, Binder, and Viñales, while Miller was slowest having started with a used soft Michelin on the rear of #43.

Viñales opted for a two-stop strategy and, after moving up to second with a 1:31.386s at the start of his second run, went to the top with a 1:31.268s on the lap which immediately followed.

Miller was still 12th having just had a lap cancelled ahead of his final flyer, but followed his team-mate and Valentino Rossi (Monster Energy Yamaha) around the circuit as the Pramac duo went first and second.

While Bagnaia’s lap was suspect, the Australian’s 1:31.153s would not be pole in any event given Viñales split them on the timing screen when he took the chequered flag.

Quartararo then set a 1:31.222s to move to fourth, which became a front row start when the lap cancellation for #63 was confirmed.

Espargaro subsequently took over fourth proper by clocking a 1:31.308s, pipping the first run benchmark which Bagnaia reverted to.

Row 4 will be Dovizioso alongside Joan Mir (Suzuki Ecstar) and lead Honda rider Takaaki Nakagami (Idemitsu LCR), the latter of whom crashed at Turn 15 just as he had done in the practice session which preceded qualifying.

Johann Zarco (Esponsorama Ducati) crashed late in Q1 at Turn 14 before improving to fourth in the session and therefore 14th on the grid.

Honda is down to two entries after factory stand-in Stefan Bradl pulled out following Free Practice 1 due to arm pump.

Castrol LCR’s Cal Crutchlow did not enter the Emilia Romagna round due to his own arm pump complications.