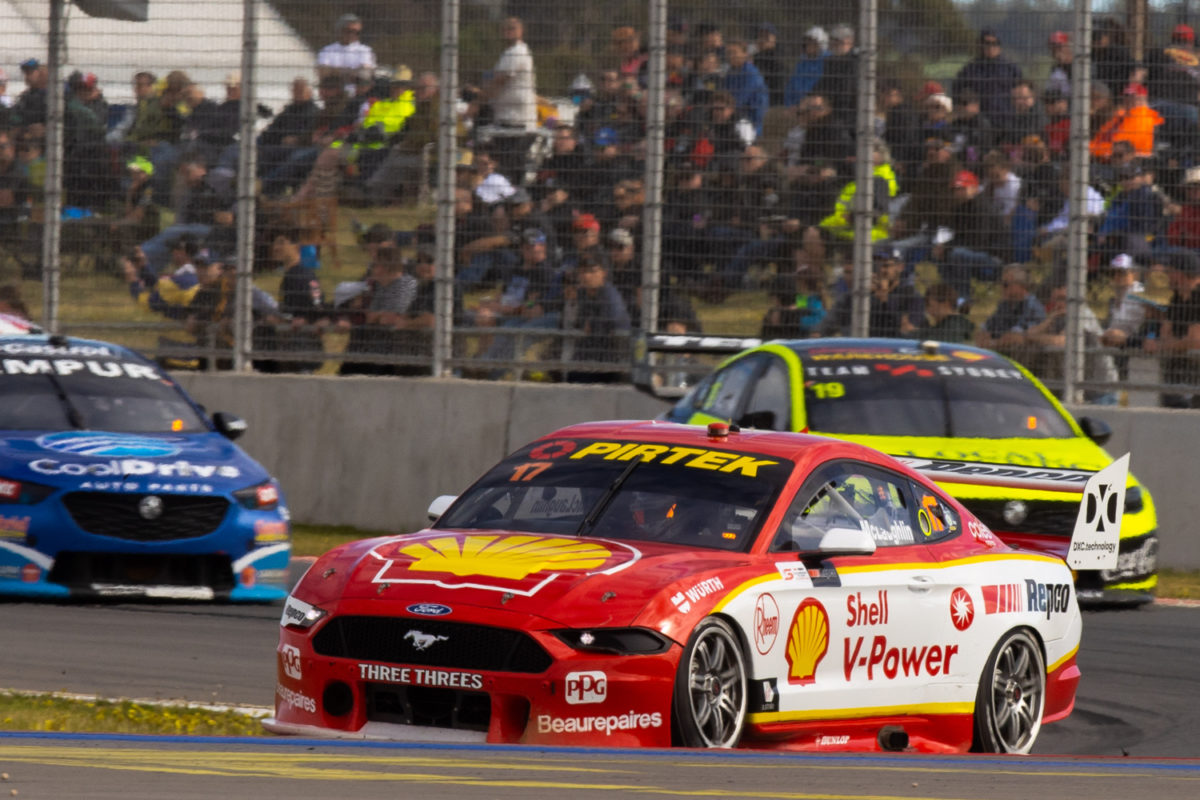 Stewards decided that Scott McLaughlin did not have complete control of his car when they penalised the championship leader for spinning Lee Holdsworth late in Race 25 at The Bend.

McLaughlin had 15 seconds added to his race time having turned the Tickford Racing entry around at Turn 14 on the third-last lap of the 24-lap encounter while trying to take over fourth position.

The Shell V-Power Racing Team driver disagreed with the penalty, seemingly suggesting that Holdsworth should have left him more room and also claiming that he was in control of his own car.

Stewards saw both assertions differently and assessed him to have committed Careless Driving, the effect of which saw third at the chequered flag become 15th in the provisional classification.

“The Stewards imposed a 15 second Time Penalty on Car #17, Scott McLaughlin, for a breach of Article 2.1.1 of Schedule B2 (Careless Driving) following an Incident at Turn 14 on Lap 22 when Car #17 made contact with Car #5, Lee Holdsworth, causing Car #5 to spin and lose positions,” read the stewards summary.

“Having consulted the DSA, the Stewards determined that the Driver of Car #5 had left sufficient racing room for Car #17 and the steering angle on Car #17 demonstrated the collision was the consequence of the Driver of Car #17 not having complete control of his Car on the entry to Turn 14.”

McLaughlin has been reclassified in 14th, however, after a post-race penalty for Tickford Racing’s James Courtney.

Nevertheless, his margin over Jamie Whincup at the head of the Virgin Australia Supercars Championship standings is still 151 points after the Red Bull Holden Racing Team driver also gained a spot due to a post-race penalty for Alex Davison.

Courtney was also found guilty of Careless Driving, after a clash with Chaz Mostert on the final lap.

The #44 Boost Mobile Mustang is therefore officially 15th having initially been 10th after McLaughlin’s time penalty was added post-race.

Mostert, who started from pole in his Mobil 1 Appliances Online ZB Commodore but took the chequered flag in 13th after fading in his second stint, is therefore back to 11th in the final classification.

“At the request of WAU Racing the RD and DSA conducted a post-Race investigation into an alleged Incident at Turn 13 on Lap 24 involving Cars #25, Chaz Mostert, and #44, James Courtney,” reads the stewards summary

“Judicial camera footage from Car #44 was reviewed which revealed contact with the rear of Car #25 which resulted in Car #25 being pushed off the circuit at Turn 13.

Stewards determined the same breach of regulations for Team Sydney’s Davison in his incident with Macauley Jones on Lap 9, demoting the #19 Local Legends ZB Commodore from 18th to 22nd.

“Following the Race the DSA and RD completed an investigation, by reference to judicial camera footage from Car #19, Alex Davison, and broadcast footage, into an Incident on Lap 9 when Car #19 and Car #3, Macauley Jones, collided at Turn 14 as a result of which Car #3 spun and lost positions.

Whincup originally finished 19th after he was handed a 15-second penalty, also for Careless Driving, having hit McLaughlin and taken him off-road while challenging for the lead on the opening lap.

Given it was called prior to his compulsory pit stop, the Triple Eight driver had to serve his punishment as a hold after taking service in the lane.

Car #88 has, however, been elevated one position to 18th with Davison’s penalty.

The other sanction dished out was a $350 fine for Team Sydney’s Chris Pither for breaking the pit lane speed limit during Qualifying for Race 25.