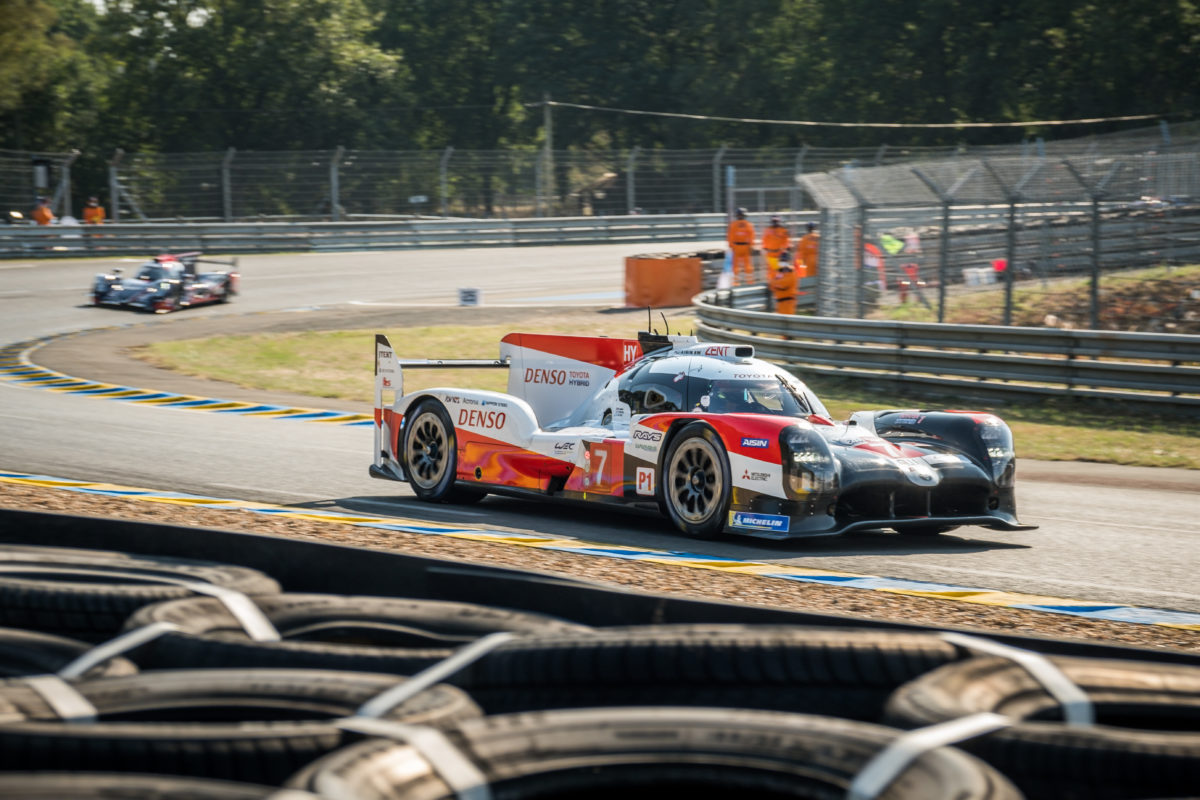 The #7 Toyota set the pace on Friday

The intra-team battle at Toyota Gazoo Racing is set to hit top gear on Friday when the all-new ‘Hyperpole’ format sets the grid for this weekend’s 24 Hours of Le Mans.

Because success penalties are not used at Le Mans, qualifying will prove more important than ever as the two Toyotas prepare to go head-to-head to win the Japanese marque’s third consecutive Le Mans race.

The success handicaps have split up the Toyotas for much of the 2019-20 FIA World Endurance Championship season, leading to large gaps between the two cars on track in races.

The new Hyperpole format will see the top six cars from each class on the circuit for a single-run, 30-minute session on Friday morning (local time) to finalise the grid for the race.

With both Toyotas set to compete on equal terms in this weekend’s race, the quest for pole position has greater meaning within the team, with Kamui Kobayashi striking the first blow in steering the #7 entry to provisional pole on Thursday by just 0.247s over countryman Kazuki Nakajima in the #8.

Kobayashi’s 3:17.089s lap was well down on his 2017 record of 3:14.791s, but the Hyperpole session will enhance the incentive to lower the benchmark with drivers battling for bragging rights off the start line.

“We expected track conditions to be quite bad but they were alright, just evolving lap by lap,” Kobayashi said after Thursday’s running.

“On long runs we are not fully satisfied with the set-up so we will look at the data and try to find some solutions but we are going in the right direction.

“The car feels good, we just need small adjustments because 24 hours is long so we have to feel comfortable and consistent.

“My qualifying lap wasn’t particularly quick, it was enough to be P1, but 2017 was the mega lap.”

Le Mans marks only the second opportunity for the Toyotas to race without handicaps after the Silverstone season-opener last September.

The handicaps are devised based on a penalty of 0.01255s per kilometre for each point between the cars in the championship table.

The Equivalence of Technology rules have seen a 7kg weight increase on Toyota’s 2019 Le Mans cars, and up 17kg on 2018.

However, at 895kg for this weekend, the Toyotas won’t be as heavy as the 932kg that the cars have weighed in at the other championship races.

Come Friday, a possible fourth straight Le Mans pole for Toyota could prove the most important for the crew which claims it, with the #8 entry winning the last two races at La Sarthe.

However, they could have company: after the Toyotas topped the first two Free Practice sessions on Thursday, Louis Deletraz and Rebellion Racing hit back in Thursday evening practice after qualifying.

With the 2020 race to feature an estimated four extra hours of darkness due to the September date, Rebellion’s late-day pace will almost certainly keep Toyota guessing until race day.

Regardless, the #8 crew will go into Friday as the chaser, with Kobayashi looking to land an early blow on the #7 side of the garage with a third Le Mans pole.

“We have been busy today, with a lot of driving time and hardly any time in between sessions,” Nakajima said.

“Before qualifying we went through everything we had in the plan and tried different set-ups. There is still a lot of work to do, so we will study and compare everything to see which set-up is the most efficient.

“It’s gone well so far, with some good aero tests in the morning then set-up in the afternoon, and qualifying was preparation for Hyperpole. It has been smooth but we have a lot to do.”