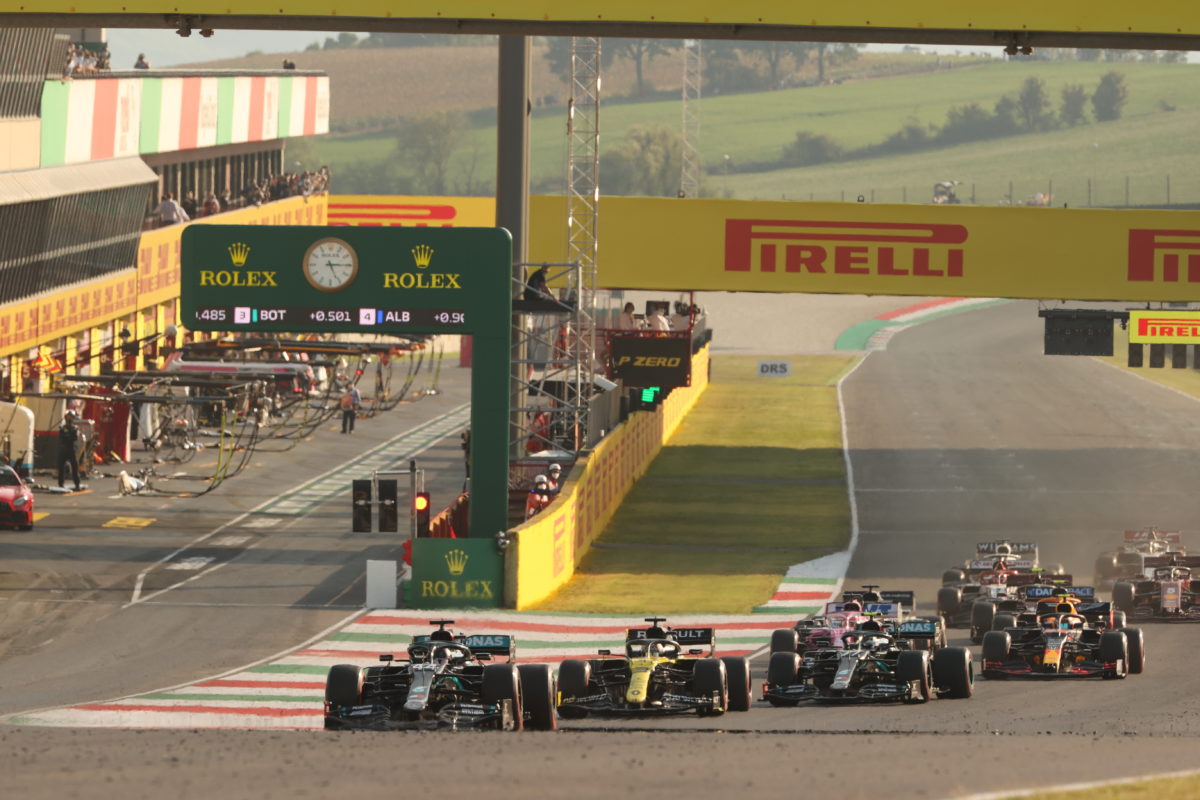 Hamilton leads the field at the second restart

Mercedes has revealed that it had no concerns for Lewis Hamilton despite his car smoking as he sat on the grid at the Formula 1 Tuscan Grand Prix.

Hamilton’s left front wheel smoked heavily as the field lined up for the first restart in Sunday’s race before clearing once the race got underway.

On the pitwall, Chief Strategist James Vowles was not overly concerned and attributed the smoke to the warm-up process the six-time world champion had followed.

“We weren’t worried about the smoke that was coming out of Lewis’ front-left wheel,” said Vowles.

“That was a consequence of the warming he’d done for both the tyres and the brakes on the formation lap.

“He generated temperatures of over 1000 degrees in that disc, and it cooled back down.

“But it was still very warm as he sat on the grid, there wasn’t really enough airflow through those last sequence of corners to cool the brake down sufficiently.”

In the car, Hamilton admitted to having some concerns as he waited for the restart.

“I got to the grid and there was a lot of smoke coming and I was definitely worried,” he said.

“I think I saw a flame at one stage which is not good because that burns all the interior of what is in the upright.

“Fortunately the start got underway relatively quickly and I didn’t have a problem from there on, but it was definitely on the limit.”

Vowles also explained the team’s decision to switch from medium compound tyres to worn soft rubber for the final stanza of the race.

As the Safety Car was deployed for Lance Stroll’s heavy crash in the closing stages, both Hamilton and team-mate Valtteri Bottas stopped for a second time.

They each had a set of brand new yellow-walled medium tyres fitted at that point before switching while the race was suspended.

“What you’re looking for is the tyre that will give you the best initial grip as it goes out, and a tyre in its new state would normally do that,” Vowles explained.

“After several laps of following the Safety Car, the race was red flagged which now meant a standing start, and that tyre that was new is now used.

“Furthermore, it’s been running around a track, potentially not as much in this circumstance, where debris could be, though. In other words, it could have picked up cuts, etc.

“So your trade off now is a used medium that hasn’t done a lot, but is now not in a new state, or a used soft.

“Between those two, the soft wins out just ever so slightly as a result that it is now a static start; you’re relying on the car and the tyre being ready to go, it’s only a formation lap that will bring it up to temperature.

“In the case of Valtteri, his soft didn’t do much; it was the soft from Q3 and if you remember a yellow flag meant he aborted very early into that lap, so for him (it was) a very easy decision.”

That had not been the case earlier in the race when Bottas reported vibrations from his front tyres.

The Finn, who took the lead from the start but lost out to Hamilton on Lap 2, also specifically asked to run an alternate strategy to his team-mate.

At the time both he and Hamilton sported a set of mediums.

A set of hard compound tyres were bolted onto Bottas’ car when he pitted on Lap 31, before Mercedes did the same for Hamilton’s car a lap later, ignoring its driver’s request for an alternate strategy choice.

“We started to notice around Lap 29, Lap 30, a vibration on Valtteri’s front tyres that was getting more and more significant,” Vowles said.

“It was reminiscent of what we saw at Silverstone, so this time we wanted to prevent any incidents from occurring.

“As a result of that, instead of boxing Lewis first, because of the priority, we brought Valtteri in.

“We reviewed what the best compound would be to fit in that circumstance.

“Given the medium degradation was higher than expected, given that the stint was slightly shorter than what we wanted to do, and that we had a lead to the field, we opted for the hard tyre.

“This wasn’t a planned stop, this was us reacting to a problem and as a result we went on the safe side.”

Hamilton went on to win the 58 lap race by 4.9s from Bottas with Alex Albon third for Red Bull.

Formula 1 now takes a weekend off before the Russian Grand Prix in Sochi on September 25-27.