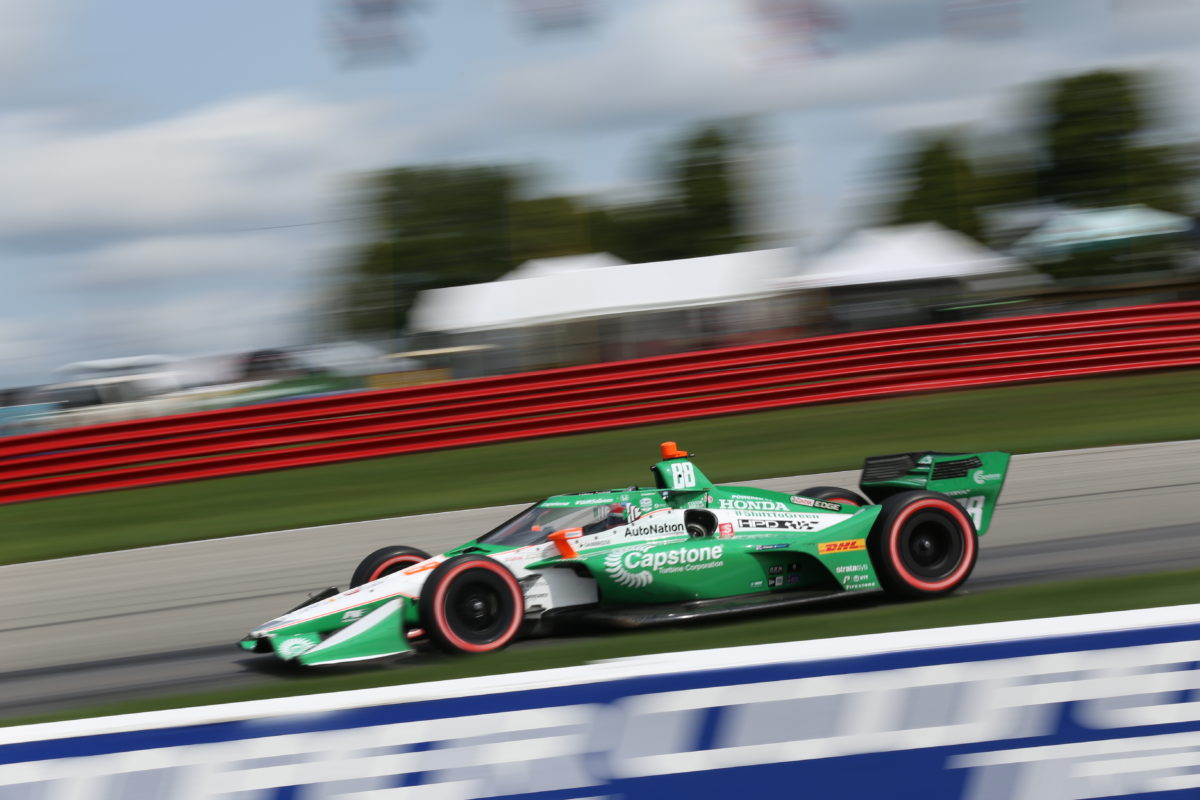 Colton Herta has led an Andretti Autosport sweep of the podium in the second IndyCar race at the Mid-Ohio Sports Car Course while Scott Dixon finished 10th after a spin.

Alexander Rossi took second and Ryan Hunter-Reay third, while Team Penske’s Josef Newgarden reduced Dixon’s series lead to a still sizeable 72 by getting home in eighth, one spot behind Will Power.

Herta qualified on pole and fended off Santino Ferrucci in the opening corners, which put the Dale Coyne Racing with Vasser-Sullivan entry onto the grass.

Those mentioned held their positions for the initial racing laps proper, save for Power passing Zach Veach (Andretti Autosport) on Lap 5, before a lose for Dalton Kellett (AJ Foyt Racing) on Lap 15.

Behind, Herta was third from Dixon, Hunter-Reay, Rossi, and Pagenaud, while Newgarden and Power were ninth and 11th respectively.

Upon the Lap 20 restart, Hunter-Reay attacked Dixon but was hung wide and instead lost a spot to Rossi, who did succeed in passing the New Zealander on the following lap.

Worse was to come for Dixon on Lap 22 when he dropped the #9 Chip Ganassi Honda over the edge of the race track exiting Turn 1 and went around, falling to 20th.

Herta passed Andretti for second on Lap 26 before an error from #98 handed third spot to Rossi on Lap 29.

Sato pitted from the lead on Lap 32 while most of the rest ran until the mid-forties.

After that cycle completed, Herta was in front again from Rossi, Hunter-Reay, and Graham Rahal (Rahal Letterman Lanigan Racing).

Dixon held fifth but was off-sequence having last stopped on Lap 31, with Power eighth and Newgarden ninth.

The series leader took his final service on Lap 58 and rejoined 13th.

Meanwhile, Herta had to nurse alternate tyres for the 29-lap run home and Rossi was conserving fuel somewhat for his 30-lap final stint, which effectively served to balance matters out.

They took the chequered flag 1.38s apart, with Hunter-Reay 1.11s further back and Rahal just over three seconds from the win in fourth spot.

Marcus Ericsson was lead Chip Ganassi Racing driver to the finish in fifth, ahead of Pagenaud, Power, Newgarden, and Pato O’Ward (McLaren SP).

Dixon picked off Max Chilton (Carlin), Jack Harvey (Meyer Shank Racing), and then Rinus VeeKay (Ed Carpenter Racing) on the final lap, to get back into the top 10.