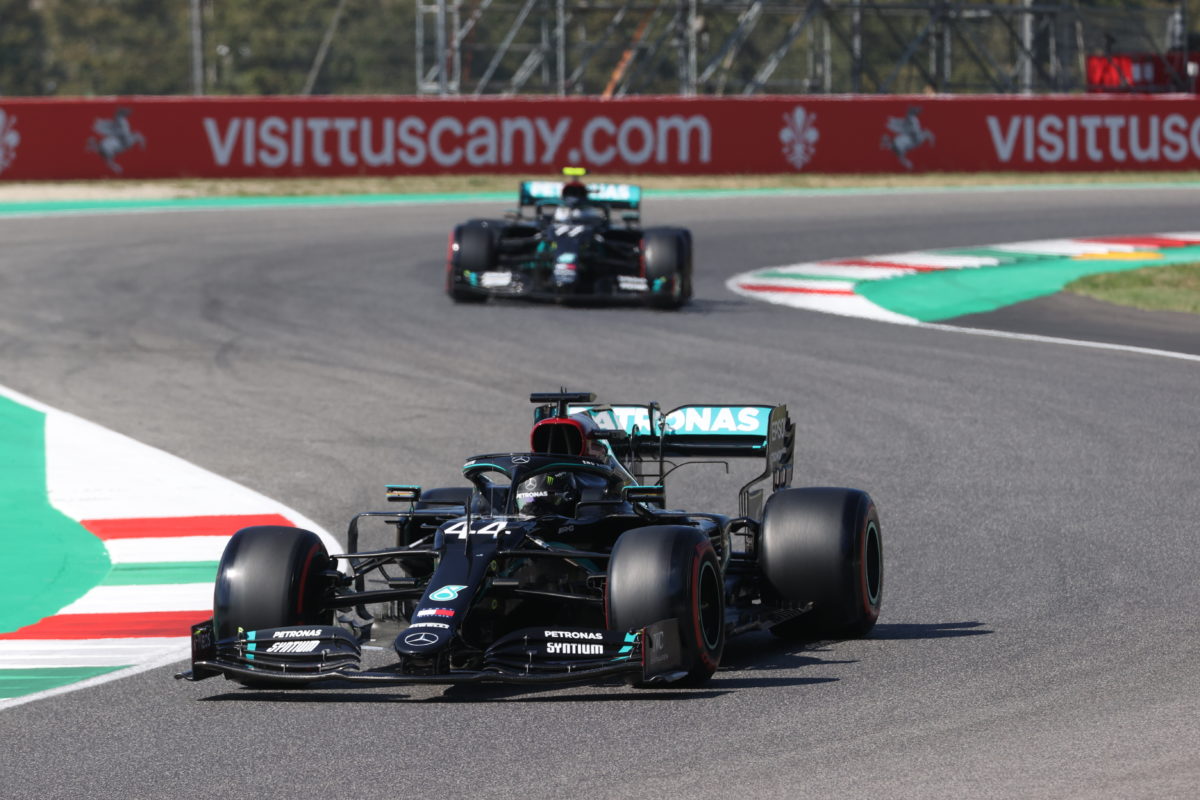 The championship leader fell to second off the start, but was able to regain top spot at the standing restart following the first red flag.

He then held the spot to the finish, surviving another standing start late in the piece when Lance Stroll suffered a puncture and crashed at high speed.

Bottas claimed second while Alex Albon put on a late charge to steal third place away from Daniel Ricciardo.

A slow start for Hamilton saw the world championship leader drop to second behind Bottas at the first corner while on exit Max Verstappen became a retirement.

The Dutchman found himself in the gravel while Carlos Sainz pirouetted in the mid pack.

Romain Grosjean was also involved, so too Pierre Gasly as the field jockeyed for track position heading into Luco.

In the melee, Sebastian Vettel picked up a broken front wing but the Ferrari driver was able to continued.

The incident appeared to begin when Gasly and Kimi Raikkonen came together, damaging the AlphaTauri while the Alfa Romeo ran into the rear of Verstappen.

Up the road, Vettel got into Sainz, who’d spun wheel to wheel contact with Lance Stroll as he exited Luco.

Verstappen had launched off the line well but in the second phase was swallowed by the pack.

Red Bull had worked on the Dutchman’s car on the grid moments before the race, the team stating it was a software issue with the Honda power unit.

The Safety Car was deployed to control the field as the stranded cars were cleared away, Verstappen joined on the sidelines by Gasly.

As the field was released at the restart, a crash in the pack involved a number of cars as they crossed the grid hatchings to take the green flag.

Sainz, Kevin Magnussen, the Williams of Nicholas Latifi, and Antonio Giovinazzi for Alfa Romeo were all involved in a hefty shunt which left the circuit littered with debris.

The field had been stacked behind the Safety Car, Giovinazzi accelerating in anticipation of the race start, only for the field to part and the Italian to torpedo the rear of Magnussen’s Haas.

Sainz then piled in while Latifi was also accounted for in the incident which saw the red flag shown with a full racing lap yet to be completed in the race.

During the stoppage, Esteban Ocon was retired due to brake trouble, reducing the field to 13 runners for the standing restart.

At the second start, Bottas headed the field before Hamilton fanned out and rounded his team-mate to take over at the front of the race.

Leclerc hung on to third with the two Racing Points in tow, Stroll ahead of Sergio Perez and then Ricciardo.

The two Mercedes checked out at the front of the race, Leclerc dropping four seconds on what was the first completed racing lap of the grand prix.

Both had fitted a new set of medium compound tyres during the red flag interruption, meeting the criteria for using two different compounds after starting the race on softs.

With the benefit of DRS, Ricciardo was able to put a move on Perez, easily clearing the Racing Point well before the braking zone for the San Donato corner on Lap 15.

Stroll progressed beyond Leclerc on Lap 18, the Ferrari driver immediately coming under the attentions of Ricciardo.

The Australian made short work of the leading Prancing Horse runner, replicating Stroll’s move from a lap earlier to cruise by the Ferrari.

It was then Albon’s turn as Leclerc quickly fell down the order, Perez demoting the Ferrari a lap later.

The Monegasque driver took to the pits at the end of Lap 21, taking on a set of hard compound tyres with a view to running to the end of the race without another stop.

The Mexican called into the lane next time around, swapping to the medium compound tyres.

Norris and Kvyat stopped on Lap 30, as did Russell, who had seen off an early challenge from Vettel to run 10th.

The pit sequence played out in favour of Ricciardo who undercut Stroll to claim an effective third; Albon ahead but yet to stop.

Having reported vibrations on his front left tyre, Mercedes hauled Bottas in from second place at the end of Lap 31.

Hamilton stopped a lap later to cover off the undercut threat from Bottas, a set of hard compound tyres going on the car and miles clear of his team-mate as he rejoined.

The Brit enjoyed a more than six second advantage with Ricciardo almost 14 seconds further back in third once Albon took service.

Stroll in fourth was only two seconds behind the Renault, though Albon in fifth found pace following his pit stop and began to reel in the Racing Point.

Concerns surrounding tyre life saw Mercedes instruct its drivers to stay off the kerbs as wear seemed higher than expected.

The race leader had edged out just over a pit stop over third placed Ricciardo, though Bottas did not have the same advantage – a second stop would have dropped him behind Albon in fifth.

Bottas boxed for a second time on Lap 44 as the Safety Car was deployed when Stroll fired off the road at Arrabbiatta 2.

The Racing Point ran off at high speed after suffering a rear puncture, making contact with the tyre barrier.

With damage to the tyre barrier, for the second time the race was suspended with just 12 runners left.

Restarted with another standing start, Hamilton led away from the lights as Riccardo moved up to second at the expense of Bottas.

A strong move from Albon saw the sole remaining Red Bull pass Perez to seize fourth place, while Russell dropped from ninth to 12th courtesy of a sluggish getaway.

Ricciardo’s time in second was brief, ceding the spot back to Bottas a lap later to fall to third.

Albon then set off after Ricciardo, quickly closing in on the Renault as the Thai driver pursued a maiden F1 podium.

Once DRS was enabled he made his move, sweeping around the outside of Ricciardo at San Donato.

Albon then scampered clear and briefly closed on Bottas, getting to within a second of the Mercedes as the Finn charged his batteries in an effort to claim the bonus point for fastest lap.

Though he would achieve as much, Hamilton stole the point back with his own fastest lap on the penultimate tour.

Hen then sealed his 90th F1 race win a lap later with Bottas falling nearly five seconds back in second.

Ricciardo fell more than two seconds adrift of third placed Albon at the flag with Perez fifth, then Norris, Kvyat, Raikkonen, Leclerc, and Vettel rounding out the top 10.

A five second time penalty for Raikkonen, for crossing the white line at pit entry, dropped him from eighth to ninth.

Victory and fastest lap for Hamilton saw his championship lead extend the 55 points, more than two wins (with fastest lap) clear of Bottas in second.

Mercedes has 325 constructors’ championship points to its name, 152 more than Red Bull (173) and 219 away from McLaren in third.

Formula 1 now has a weekend off before heading to Sochi in Russia for Round 9 of the 2020 season on September 25-27.