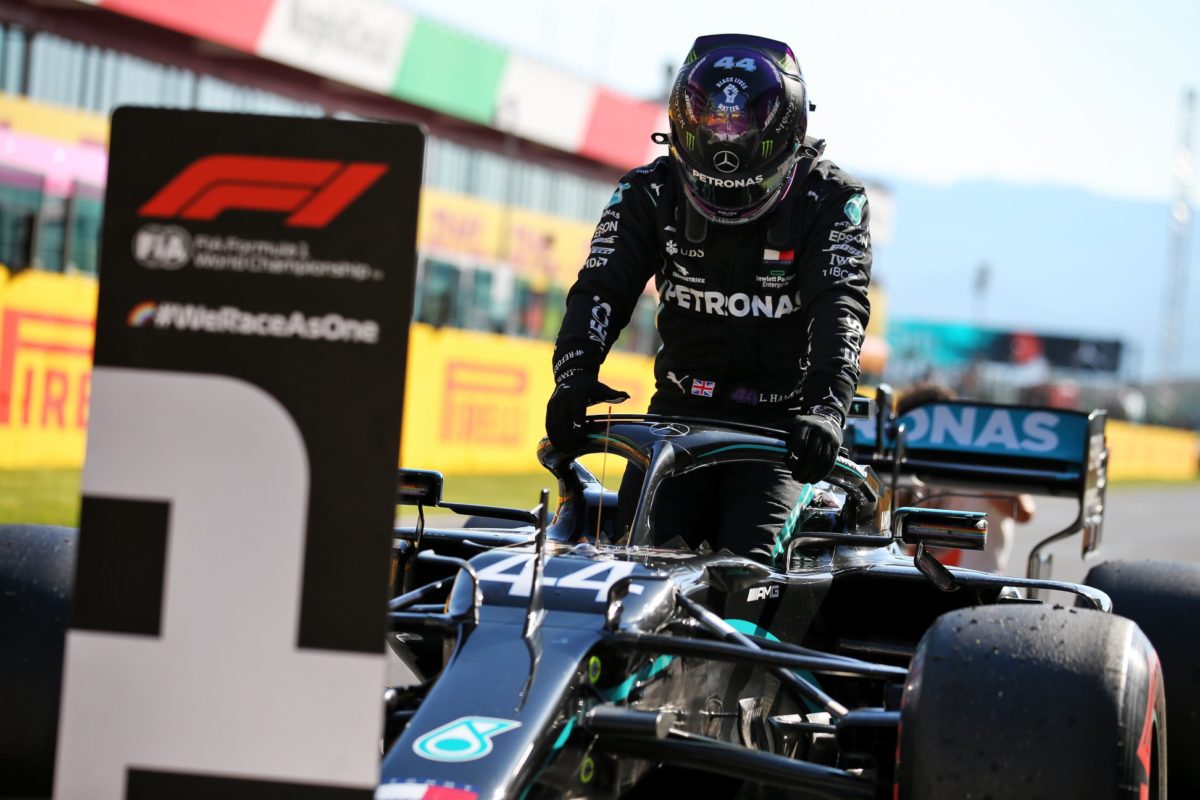 A spin from Esteban Ocon as he begun his only Qualifying 3 flying lap drew the yellow flags as the Renault sat broadside to the circuit on driver’s left on the exit of Borgo San Lorenzo.

It prevented a number of runners from improving their times, most notably Bottas, as they all had to slow in the first sector.

By running ahead of Ocon on the road, Hamilton was able to complete his final flying lap uninterrupted but was not able to improve on his earlier effort.

Even still, his 1:15.144 set early in Qualifying 3 remained the benchmark figure as secured top spot for the championship leader.

Immediately behind him on the road, Max Verstappen also completed his lap without interruption but was similarly unable to better his previous time.

Ferrari suffered a mixed session with Charles Leclerc fifth while Sebastian Vettel exited the session in Qualifying 2 with only the 14th best time.

Even then, the German was lucky to emerge from Qualifying 1 as he found himself in the drop zone as the chequered flag waved.

Only his final flying lap saw him escape, and even then only to 15th.

In Qualifying 2, a late effort from Lando Norris wasn’t enough to see him progress to the final phase of the three-part session, the McLaren driver recording the 11th best time of the session.

That saw him one place up on Daniil Kvyat (AlphaTauri) who ran wide at Arrabiatta 1 on his final flying lap. Next was Kimi Raikkonen (Alfa Romeo), Vettel, and Romain Grosjean (Haas).

The final part of qualifying saw two different schools of thinking, with the bulk of the field opting for a traditional two-run approach.

That saw most exit the lane early in the session to record a banker time, a critical decision for many as events would pan out.

Ocon and Sergio Perez opted for a different strategy.

In Ocon’s instance he simply didn’t lay down a banker lap, relying on a single flyer in the closing moments.

His spin midway around that lap meant the Frenchman did not set a time and was consigned to 10th by default.

Meanwhile, Perez ran off sequence, remaining in the garage for the opening minutes before emerging as the field headed back in the lane after their first timed laps.

It was the Racing Point driver’s sole effort in the session and landed him the sixth fastest time.

The Mexican will drop one spot on the grid, however, owing to a one-place penalty for his part in a tangle with Raikkonen during Practice 2 on Friday.

Behind Perez was his team-mate, Lance Stroll, then Daniel Ricciardo (Renault), Carlos Sainz (McLaren), and the beleaguered Ocon.

At the front of the field, the result marked Hamilton’s 95th Formula 1 pole position, while victory in Sunday’s race would move him to within one of equalling Michael Schumacher’s all-time record tally of 91.