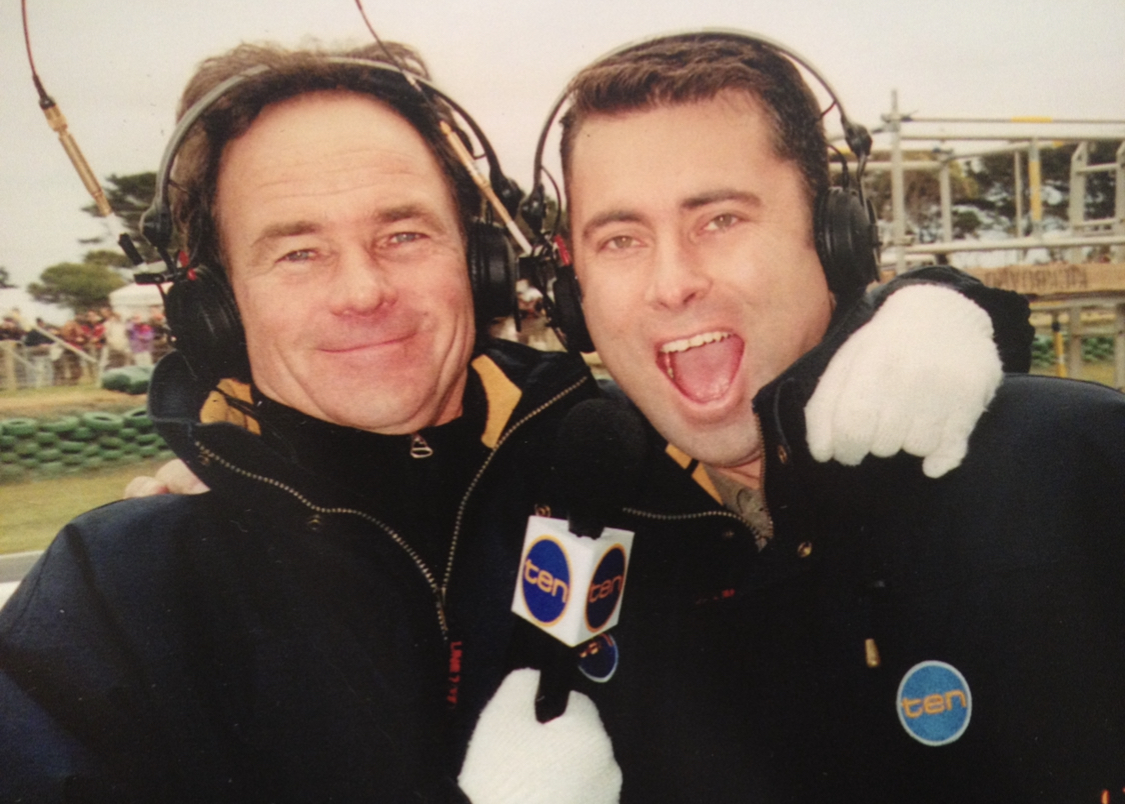 On what would have been his 70th birthday we reflect on the man who reached rock star status for his achievements on a motorcycle (as well as cheating death) and for the incredible cheek, charm and personality he demonstrated off the bike.

We quickly adopted him as one of our own when he moved to Australia. His TV one-liners are etched in the minds of fans and colleagues to this day.

Greg Rust was at Channel 10 when the network was a true home of motorsport and recalls what it was like to work with the legend.

“Ere Thrusta….watch this!” Barry Sheene said as he upended one of those hollow metal legs you’d find in a school science lab.

All these nuts, bolts and rods fell out onto his office desk.

It used to be inside him and kept Baz glued together during a career that netted back-to-back 500cc World Championships (now MotoGP) during the 1970s after some horrific crashes including a well documented one at 170mph at Daytona that he was bloody lucky to survive.

It was one of my earliest memories of Baz.

I’d been dispatched to the Gold Coast for an RPM story that required some of his typically witty viewpoints.

I had one of those surreal, pinch yourself moments when I arrived. How the hell did I get the chance to go to Barry’s place?

We had coffee (Baz would sometimes get behind the machine at a restaurant and make them when we had Ten team dinners).

The Sheene house was filled with pictures of their global adventures and captured moments with A-listers. Candid stuff.

You were drawn to them, to know the backstory behind the laughter and high jinx going on.

There was no real sign of artwork with the exception of an alcove that had a number of bikes from his career on display.

When I think of his Gold Coast house now it’s like bookends for me. One of my last memories was visiting him there a few weeks before he passed away in 2003.

He’d sunned himself a little to hide the impact of the cancer maybe so we’d remember him in the same vibrant way. His good friend Russell Ingall and wife Julia were visiting too.

Baz took Russell and I for a tour of the Agusta helicopter he’d bought. He loved flying!

The years in between those bookends are very vivid for me.

Lots of amazing stories of a man who had the common touch but could hold court (and often did) with leaders and royalty. I’m sure he taught Princes William and Harry about motorcycles or karts. And then he’d give Joe Average the same amount of time and attention.

He’d chat to my parents on the way home from the track when I phoned them. “Oh hello darlin…..ow are you?” he’d say to Mum.

Baz gave me relationship advice too. “Start out as you mean to continue!” he told me more than once. My folks found a book on him that I’d had as a child. You know the kind; big font and drawings/cartoons of him racing. He laughed when I asked him to sign it. “You’re a very attractive man and don’t think I haven’t noticed,” he wrote. I’ve kept it to this day.

Above all his mantra was to have fun! “Let’s av a larrf” he’d say as they counted down to the start of a broadcast.

If we were having fun so were the viewers. From “that’s a major, major sausage” to “the gateway to hypothermia” the commentary lines were gold.

We have some of the best analytics that coverage demands now but we really miss his input. It was so entertaining.

That same bloke in those funny Shell commercials with Dick Johnson could just roll them out. He did it off-camera too which is why audiences loved him. It was the same person.

Baz didn’t always stick to the TV rundown preferring to do what came naturally like the time he jumped on one of the stunt bikes in Adelaide and pulled a massive burnout. The officials in race control were probably screaming but his smile said it all and fans loved it!

A few ripper yarns have emerged over the years.

His best friend and former team-mate Steve Parrish told me about Baz hatching a plan to blow-up the dunnies at a track in Europe during their bike racing days.

The promoter had promised to improve them for years and hadn’t. Under the cover of darkness this team of amateur guerrillas began carrying out a detailed plan (not) only they used too much accelerant and shit literally went everywhere!

Back in Ten’s Sydney studios he once took over the scissor lift and proceeded to try and teach himself to drive it. “Ohhhhh f**ken ell!” he said madly grabbing levers to stop it smashing into the very expensive array of roof lights.

Then on another occasion the wardrobe team had to wash his jeans (he only ever wore jeans). They told him to borrow some of Billy Wood’s gear in the meantime. Woodsy’s chinos looked like a tent on him!

Somehow Baz found a denim skirt of Jessica Rowe’s – the News Presenter. Daryl Beattie and I lost it as he pranced past us while we tried hopelessly to keep commentating. What a sight!

Baz and Billy were like the odd couple in many ways but a really great on-air team with immense respect for each other.

Baz took an interest in Billy’s family and sorted tickets to an Elton John concert for him. He simply picked up his phone and called Elton direct!

He had a real caring side as well.

We still don’t know if someone put him up to it but because Baz felt for Marty he smoothed it by making lighthearted fun of the situation. He loved the motorcycle racing community!

Baz could get away with things most of us would never dream of.

He hated parking miles from the pitlane. There was a few VIP spots in the paddock at Adelaide that were clearly marked for the Premier and other dignitaries.

Baz would say….”Oh we’ll be right he won’t be ere today!” as he commandeered the spot. And if security stopped him going any further he’d politely smile, look over his shoulder like he was going to reverse, then hit the gas roaring off in the direction he wanted!

He taught us some cockney. “Ere who’s the geezer with the dodgy set a railins?” – who’s the person with the bad teeth?

He learned a number of languages during his travels and was pretty fluent so Baz was called on to teach the Supercars drivers how to do some foreign language intros for the international V8 coverage.

I saw him coaching Russell Ingall at Winton once although we were never sure the sign off wasn’t something like “aaaand don’t forget to wash your balls!”

I’m thinking especially of his family today. His wife Stephanie, who never seems to age and his kids Sidonie and Freddie.

It wasn’t until his final years that Freddie realised just how big his Dad’s status was.

They were chased by Paparazzi in England one night. I had a sense of his global significance, beyond the sport we loved, too.

Various international networks wanted comment from him on the passing of his mate George Harrison – the former Beatle. We found a quiet spot out the back of Sandown to chat about it.

In truth I only knew him in the final five to six years of his life but I consider myself very fortunate to have crossed paths with him in that time.

He was very good to me but I’m not the only one with that story. He never sought credit for it either. That wasn’t his style.

Baz crammed more into his 52 years than any of us ever will. He left us way too soon and is missed every day.

I often wonder what chaos and practical jokes he’d be getting up to now at age 70 in a PC world flooded with social media. One thing’s for certain there’d be lots of laughs.

Listen to Rusty’s podcast with Steve Parrish here and enjoy some more memories of Baz:

Bill Woods also speaks about Baz in this episode of Rusty’s Garage too: