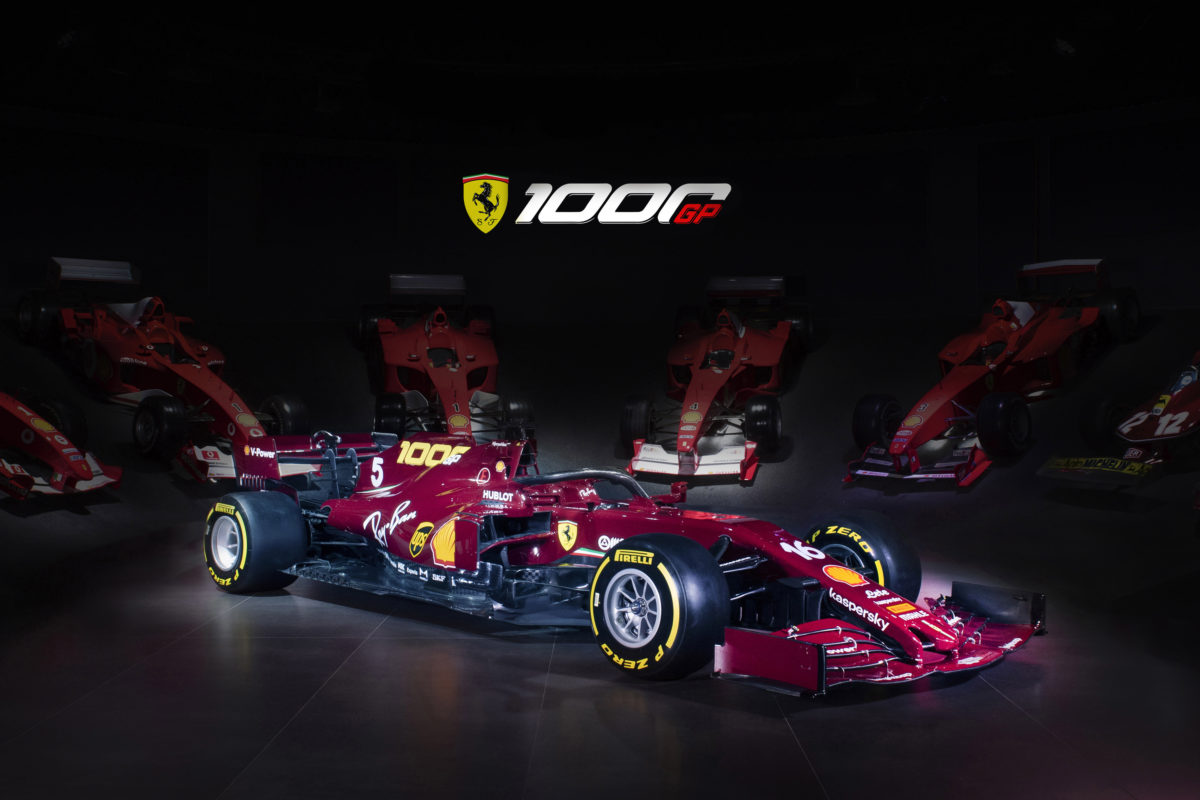 Ferrari has revealed a retro livery to celebrate its 1000th grand prix this weekend at the Mugello Circuit which it owns.

The SF1000s of the present day will carry a burgundy look matching that of Ferrari’s first race car, the 125 S, and its first Formula 1 car, the 125 F1 which made its debut in the 1950 Monaco Grand Prix.

Charles Leclerc and Sebastian Vettel will also don matching racesuits for the Tuscan Grand Prix while, before race start on Sunday, Mick Schumacher will drive an F2004 which father Michael steered on his way to his seventh and final world championship title.

“Scuderia Ferrari’s 1000th Grand Prix is a very important milestone, therefore it had to be marked in a special way,” said Piero Ferrari, the marque’s Vice Chairman.

“That’s why we decided to run a unique livery on the cars for this event, with the SF1000s taking to the track at the Mugello Circuit in the Burgundy colour first seen on the 125 S, the first racing car to carry the Ferrari name.

“Even the look of the race numbers on Charles’ and Sebastian’s cars will reflect the tradition of the past, giving the impression of being hand painted onto the bodywork, while the drivers’ race suits will also match the car colour.

“It’s a tribute to our origins: to our starting point for the amazing Ferrari story, characterised by an endless desire to compete, alongside the will to build road cars that are exceptional in terms of technology and design. Ferrari is unique in the world, because the company has the soul of a car manufacturer and of a racing team, an inseparable link that is never questioned.

“Only a few months ago, no one could have imagined that our thousandth race could take place at our own Mugello circuit.

“I am pleased that in the Grand Prix official name, Formula 1 chose to pay tribute to Ferrari, the only team that has always been present in the sport’s 71-year history.”

The ‘Gran Premio Della Toscana Ferrari 1000’ will also be the first this year in which crowds will be allowed, albeit only 2880 per day.

Said Vettel, “It’s a great honour to be driving a Ferrari in what is the 1000th Grand Prix for this, the longest serving of all Formula 1 teams.

“It will be even more of a pleasure to celebrate this anniversary at the Mugello Circuit and also because, for the first time this season, a few spectators will be allowed into the grandstands.

“It is a very nice and super technical track with changes of gradient and very demanding corners.

“The track should better suit our car, so let’s hope we can deliver something to please the tifosi, both at home and at the circuit.”

Leclerc added, “I can’t wait to be on track at Mugello with Ferrari. The circuit is really beautiful and on top of that, we are celebrating our team’s 1000th GP in Formula 1. I’m also pleased to learn there will be a few thousand fans in the grandstands.

“The track has a very long straight, but it’s not super fast like the past two we raced on and so it should be a bit better suited to our car.

“It will be important to make the most of the track time available, as we have no data from which to start.

“We hope to put on a show for the people at home and those in the stands and also get back to picking up some good championship points.”

Mercedes has also joined the celebrations of Ferrari’s milestone this weekend, changing the colour of the Safety Car to red.

“We will honour this achievement with a Mercedes-AMG Safety Car in Ferrari red – our nod to a racing history that brought us some of the greatest moments in Formula One.

“The men and women of Maranello have a proud history to celebrate and we’re paying respect to those celebrations this weekend.”

The Safety Car is yet to be formally unveiled.

Practice for the first ever Formula 1 grand prix at Mugello starts tomorrow at 19:00 AEST.