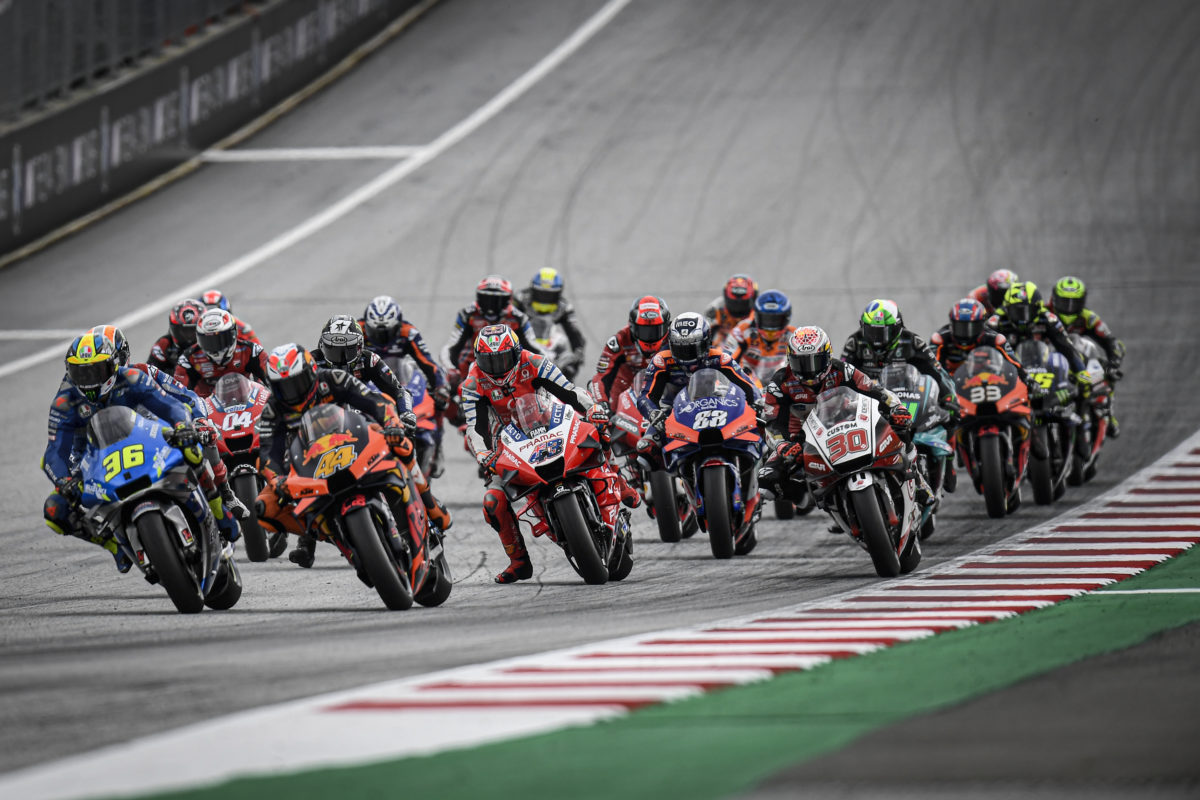 The MotoGP field at the Red Bull Ring

Casey Stoner has questioned whether the 2020 MotoGP season should be considered a true world championship given it will take place entirely in Europe and includes repeated circuits.

With the calendar now finalised, this year’s premier class campaign is set to be comprised of only 14 races and nine distinct circuits given five will play host on back-to-back weekends.

Furthermore, the only round to have taken place outside of MotoGP’s home continent is that of Qatar in March which, proceeded with Moto2 and Moto3 only given the junior classes were already at Losail for testing.

While Stoner is glad to have racing back, he does not necessarily believe the title of ‘world championship’ is valid under the circumstances.

“I think it’s fantastic that racing is up and going again,” the two-time premier class world champion told the In the Fast Lane podcast.

“It’s great for everyone in the teams being able to at least justify their positions, and (for) sponsors (and) everything, keeping the whole thing rolling is as good as we can imagine right now.

“Unfortunately, I’m probably going to be a little bit, I suppose, opinionated with some things.

“I think the first one is calling it a world championship is a little bit difficult this year, you know?

“You’re racing two races at the same circuit, and if the selection of circuits suits somebody it really is a big benefit to do that.

“Not really traveling around the world, creating a world championship, is something I’m not a massive fan of.

“But the racing itself is fantastic, rather than these riders sitting around all year. I think it’s fantastic.”

Stoner also agreed when it was put to him that the value of the championship had been reduced this year given Marc Marquez has been missing from the field due to injury.

Marquez broke his right arm when he crashed out of the season-opener at Jerez and aborted his attempt to race at the same circuit on the following weekend.

The champion of six of the past seven seasons is now likely to be out until at least some time in October.

In the meantime, four different riders have claimed victory in the first five races of the campaign, including four first-time winners.

“Without Marc there, quite honestly, there’s no leader at the moment,” declared Stoner.

“And you see that by the results, by the people that are standing on the top step of the podium.

“Marc was a clear leader and took that championship to another level. When I was there it was myself, Valentino (Rossi), Jorge (Lorenzo) and Dani (Pedrosa) that were sort of always at the front stretching the field out.

“At the moment they don’t have that rider to do it, and show what you should be doing each weekend, a level of consistency throughout a season.

“Because this season is condensed, two races at each circuit, (the riders) sort of feel like if they got a half decent result one week, they’ll be okay for the next week. It’s a very, very different championship and I think it’s upsetting the mix.”

Repsol Honda has struggled badly without its team leader, which Stoner says demonstrates the difference which Marquez makes.

“I honestly think you could pretty much win with any bike on the grid there at the moment,” said the man who won titles with Ducati and Honda.

“They’re all very similar, they just have some different traits to them and where they find their speed.

“The big difference is, again, there’s no leader for people. If you’re not a leader, then you’re a follower. And if you’re a follower, you’ve got to see someone doing something on the bike to believe yourself that it can get there.

“It’s not an easy thing. I went through it in Ducati. When I wasn’t there the Ducati really struggled a little bit. I’m not necessarily calling myself a leader, but I never looked next door and thought the grass was greener. I thought ‘This is the bike I’ve got to work with, so there’s a way of finding speed out of it’.

“It’s exactly what Marc does. He doesn’t worry about the rest of it. He just worries about his own thing, finding speed out of it, and with that people see what the bike can do and go ‘well if he can do that, I can at least get closer towards the front’.

“Without Marc there, (Repsol Honda) do certainly seem to have lost their way a bit in showing what the bike can do.”

The season resumes this weekend with the first of two rounds at Misano.