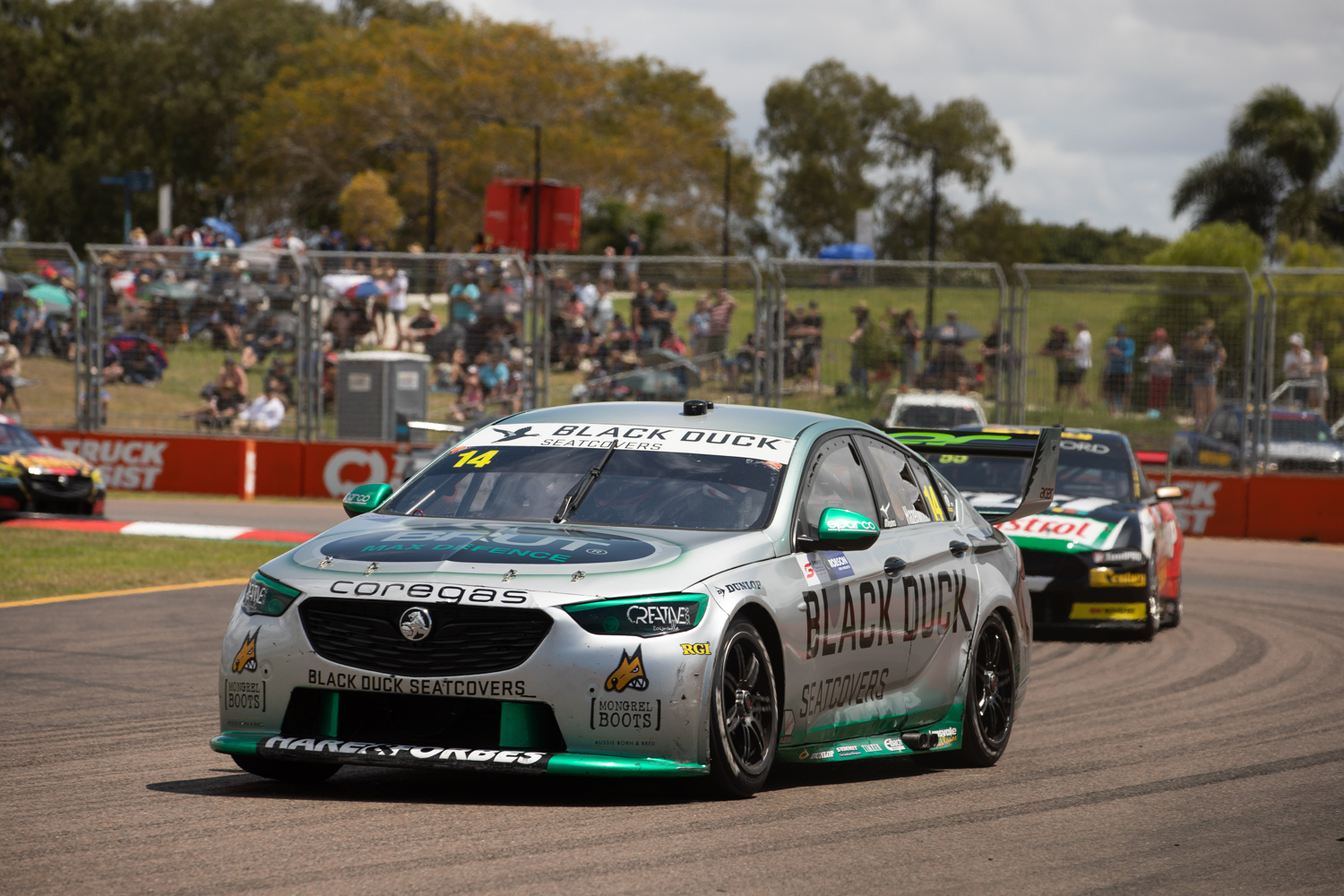 Brad Jones Racing driver Todd Hazelwood is hopeful his first Supercars win will come “sooner rather than later” after a breakthrough pole position in Townsville.

Team-mate Nick Percat was second fastest in the session having only minutes earlier also recorded his first Supercars career pole position for Race 23.

However, neither would go on to convert their front row starts into wins. Percat finished fourth in Race 23 while Hazelwood finished sixth in Race 24.

The 24-year-old’s hopes of a maiden win were thwarted late in the piece when the Safety Car was deployed for the crashed car of Anton De Pasquale.

Prior to that, Hazelwood had been making significant inroads into Shell V-Power Racing Team driver Scott McLaughlin who had found the lead courtesy of an undercut.

That charge was ultimately stifled by the bunching of the field and Hazelwood faded as those on fresher tyres behind him surged by in the closing laps.

Hazelwood was upbeat, nevertheless, pinpointing his maiden pole position as a significant step for the team as it looks to be a regular contender for race wins.

“We’ve been knocking on the door for the past two weeks,” Hazelwood told Speedcafe.com.

“I think it was only a matter of time until we got everything aligned perfectly.

“Both BJR cars were super fast, and to have us lock out the front row was an extremely proud moment for everyone involved. I was just super excited and couldn’t wipe the smile off my face.”

Hazelwood said he’s long been aware of what his #14 Holden ZB Commodore was capable of citing the pre-season test at The Bend Motorsport Park as his first glimpse of speed.

However, the Adelaide-born driver said he hasn’t been able to convert that pace after a myriad of issues throughout the season.

Hazelwood has been hampered through no fault of his own ever since the Virgin Australia Supercars Championship resumed at Sydney Motorsport Park.

An anti-roll bar failure curtailed a podium charge in the first Sydney SuperSprint. However, when the Supercars returned to Sydney, Hazelwood made amends to claim his first career podium.

He then took to Hidden Valley Raceway where he was a victim of a Lap 1 crash in the opening race of the Darwin Triple Crown.

Hazelwood suffered thereafter with a mystery straight-line speed issue that not even an engine replacement could resolve, resulting in a six-race run of finishes no higher than 15th.

In the lead up to the Townsville event, Hazelwood said he was confident the team had resolved the issue.

However, he wasn’t able to validate changes made to his car after another Lap 1 incident in the first Townsville SuperSprint took him out of contention.

Finishes of 13th and fifth followed, giving the youngster some hope leading into the second Townsville SuperSprint.

“I don’t believe in luck, but I feel like nothing has played out our way this year,” said Hazelwood.

“We’ve had things go wrong, failures, or just haven’t had a smooth and consistent weekend yet.

“I felt like we’ve had a few good missed opportunities so it would be nice to turn that around.

“We can see the potential and see what the car is capable of. Our time will come sooner rather than later and we can start putting a championship together and getting better results.”

Hazelwood was left to lament the late-race Safety Car that ultimately cost him a chance at another podium and potential victory.

However, with two boxes ticked this season in his first podium and first pole position, Hazelwood is hopeful it’s only a matter of time before the first win.

“We worked hard all weekend and there wasn’t one session where we had the same car from one session to the next,” he explained.

“We were always fighting and working hard to try and understand how we can close the gap up to the guys in front and make the race pace better.

“Particularly in Race 24, my first stint I was really happy with. I could manage the tyre really well.

“Once I knew that I was in a position where I could be in front, have clear air, and manage the tyres, we proved that we could potentially stitch together a podium,” he added.

“I’m not sure if I would have had the pace on Jamie (Whincup_ late in the stint. It would’ve been an epic battle from green flag to chequered if there had been no Safety Car.

“Just being in that dog fight there with the Safety Car, my tyres didn’t come on as nicely as others and I was a bit vulnerable.

“It was just one of those things where we didn’t have the fastest car at that point. There were guys behind on better tyres and at that point, you’re a sitting duck.

“It’s frustrating not to come away with a result I felt the whole team deserved, because they’ve done a phenomenal job. It’s one that got away.

“We’ll keep hunting and keep digging, but it’s a great shot in the arm for BJR.

“I’m really ecstatic for those guys because of the amount of workload going on behind the scenes.”

The next event in this year’s Supercars season is the Repco SuperSprint at The Bend Motorsport Park on September 19-20.