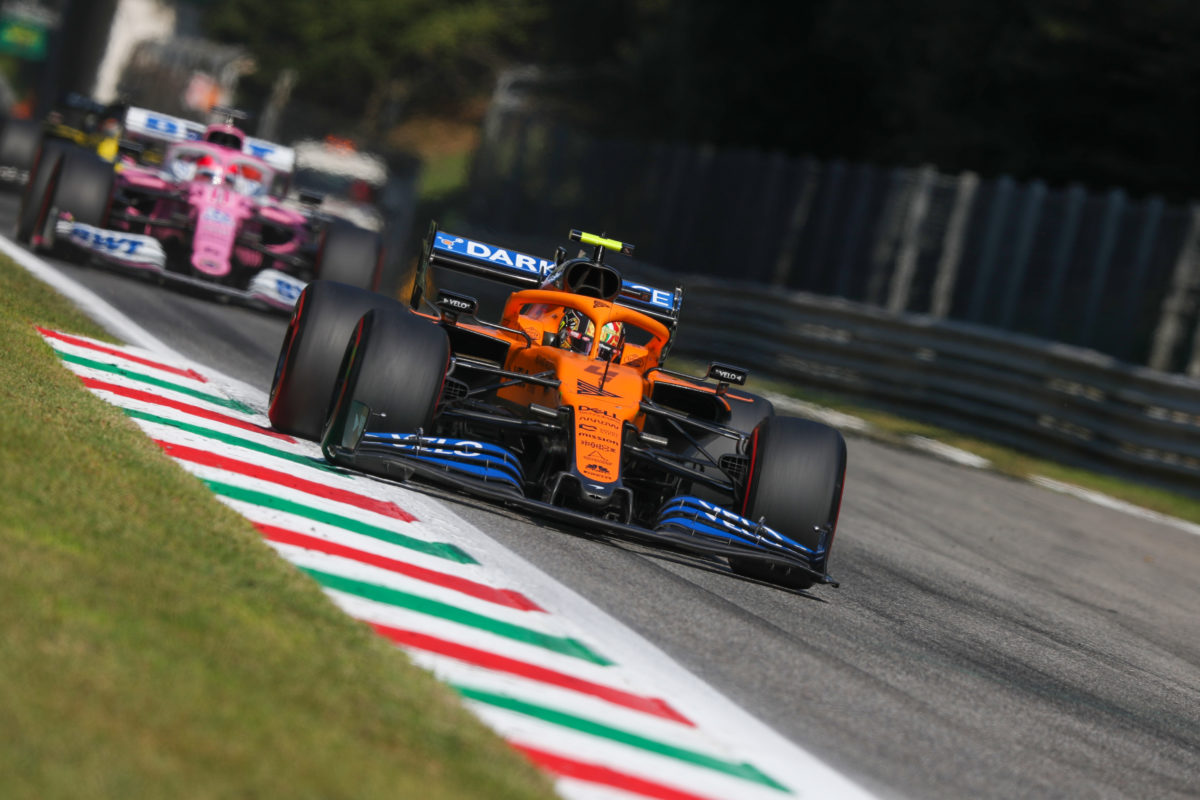 Norris finished fourth for McLaren in a race won by Pierre Gasly from Carlos Sainz and Stroll.

A penalty for Lewis Hamilton shortly after a red flag turned the race on its head, opening the door for Gasly.

By pitting before the first Safety Car was deployed, Gasly found himself promoted up the order when those ahead stopped following Kevin Magnussen’s retirement.

Sainz and Norris had been running strongly for McLaren to that point in behind Hamilton, holding down second and third respectively.

Stroll meanwhile did not stop under the first Safety Car, but was able to switch tyres under red flag conditions when Charles Leclerc crashed out at the Parabolica.

“The only reason I think I was not on the podium was Stroll benefited from a free pit stop,” Norris told Sky Sports F1.

“It’s a bit of a pooey rule, I think, stupid rule because they just get it for free. They don’t deserve it in many ways.”

Under a red flag, teams are allowed to change tyres. That includes switching from one compound to another.

A driver must use two different compounds of tyre during the course of a grand prix, but regulations do not explicitly state that a pitstop must be served in order to make the change.

By switching tyres under the red flag conditions, Racing Point and Stroll met the requirement to use both compound of tyres while saving the time needed to serve a racing pitstop.

“It should just be taken out,” Norris said of the ability to change tyres under red flag conditions.

“I think we have the two examples.

“We’ve got Gasly, who boxed before; he was ahead, it was red flagged, and he was there. It was fair, you can’t do anything about that.

“But for someone who just hasn’t boxed, they’ve just gained 24 seconds doing nothing.

“It’s just because they haven’t boxed yet,” he added.

“You can get lucky by doing what Pierre did, but I think that’s fair play, but the one of not having to box and getting to use that mandatory pit stop, which they didn’t really do, is the thing which I don’t think is right.”

Norris ended the race 2.7s behind Stroll, leaving the pair tied on 57 points in the drivers’ championship.

However, it is Stroll who sits above the McLaren driver in the standings courtesy of more fourth placed finishes in the eight races held thus far.

Mugello is the venue for Round 9 of the 2020 F1 season with practice set to get underway on Friday.