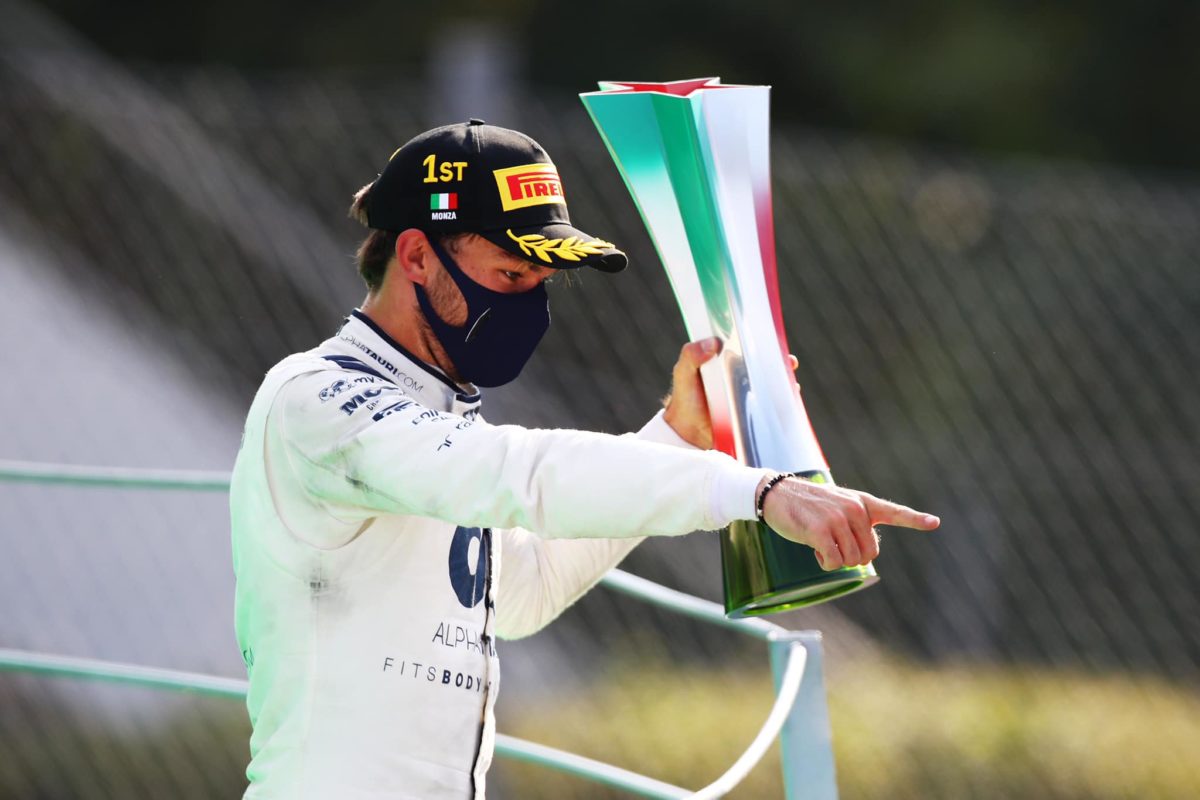 Pierre Gasly has won a bizarre Formula 1 Italian Grand Prix which was interrupted by a red flag and saw Lewis Hamilton handed a stop-go penalty.

The AlphaTauri driver inherited the race lead midway through the encounter before hanging on to claim victory after seeing off a late challenge from Carlos Sainz with Lance Stroll third.

Hamilton finished just seventh after he was penalised for entering the pit lane while closed when the Safety Car was deployed at half distance.

Kevin Magnussen had stopped on track just shy of pit entry, drawing the Safety Car and ultimately triggering the sequence of events that would lead to Gasly’s unexpected win.

At the start, Hamilton got away well, shadowed by Sainz into the first chicane as Valtteri Bottas dropped to third.

Lando Norris then elbowed his way through on the Finn at Variante della Roggia, driving around the outside of the Mercedes driver.

A poor opening lap worsened as Bottas ran wide at Lesmo 2 and opened the door for Sergio Perez before Daniel Ricciardo found a way through into Variante Ascari a few hundred metres later.

On the radio Bottas reported “a puncture or something,” but continued on track having dropped from second to sixth on the opening lap.

Max Verstappen, who’d slipped to eighth in the opening exchanges, made a move around the outside of Stroll to claim seventh.

Sebastian Vettel’s race ended after just six laps, the Ferrari driver suffering brake failure, sending the German though the escape road at the opening chicane where he burst through the polystyrene bollards before crawling back to the garage.

Bottas found himself stuck in sixth and managing a hot Mercedes after just a dozen laps, pulling out of line in an effort to get increased airflow into his radiators.

It left for a somewhat hapless and frustrated driver after he dropped out of the DRS zone behind Ricciardo and came under pressure from Verstappen in seventh.

Magnussen was the second retirement from the race as he ground to a halt on the exit of the Parabolica, just short of the pit lane entry.

Initially covered by yellow flags, the Safety Car was called for as Hamilton rounded the final corner to complete Lap 20, the race leader diving to the lane.

It left Hamilton and Antonio Giovinazzi under investigation for entering a closed pit lane and ultimately handed 10 second stop-go penalties.

When the pit lane was eventually opened at the end of Lap 22 the field poured into the lane, led by Sainz.

McLaren double stacked its cars, performing a slick turnaround to send Norris back out without losing an (effective) place.

Sainz, who had been leading the race, found himself in eighth place as Hamilton led the restart.

A heavy crash for Leclerc at the Parabolica drew the Safety Car back out just a lap later, which soon became a red flag.

It left second placed Stroll in a strong position, the Racing Point driver having not taken a stop in the race but able to change tyres under the red flag.

Gasly was in a similar position in third, an effective second once Hamilton’s penalty was factored in.

A standing start got the race back underway, Hamilton on pole with Stroll on a fresh set of medium compound tyres alongside him on the front row.

Hamilton jumped well and covered into the first chicane as Gasly slotted into second place, Stroll elbowed aside by both Alfa Romeos as he fell to fifth.

The Canadian then made a mistake at the Variante della Roggia and lost another spot to Sainz at Lesmo 2. The pair then swapped places again at Variante Ascari.

At the end of the first lap following the restart, Hamilton served his penalty, dropping to the back of the train. Giovinazzi remained on track, running third behind Raikkonen.

At the end of Lap 30, Giovinazzi took to the lane for his own penalty, releasing Sainz into third place though 2.1s behind Raikkonen.

Also in the lane was Verstappen as he climbed out of the Red Bull and into retirement with an engine issue.

Sainz went around the outside of Raikkonen as they started Lap 34, the Alfa Romeo driver defending but leaving just enough room for the McLaren.

A lap later, Stroll performed a similar move at the Variante della Roggia chicane, rounding the outside of Raikkonen to take third place.

On Lap 37, Hamilton caught Alex Albon in 14th to rejoin the back of the racing train, 22 seconds in arrears of Gasly out front.

Despite having easily caught Albon, Hamilton was toothless in attacking the Thai driver until a mistake at the first chicane created the opportunity the championship leader needed.

Not helping his case was, like Bottas, temperature concerns forcing the Mercedes driver to pull out of the slipstream.

Russell and Grosjean proved rather easier prey as Hamilton progressed to 12th on Lap 42 and then 10th on Lap 47.

The lead battle condensed to within a second as the race built towards its crescendo as Sainz homed in on Gasly, though the AlphaTauri was able to edge clear on key parts of the circuit to remain just out of the DRS range.

On the final lap Sainz further narrowed the gap and found himself tucked up under Gasly’s rear wing.

The Frenchman was impervious, holding on to win the race by less than half a second from Sainz with Stroll third and Norris fourth.

Bottas finished fifth ahead of Ricciardo and Hamilton, who’d climbed back to seventh.

The top 10 was rounded out by Esteban Ocon, Daniil Kvyat, and Perez.

For AlphaTauri, the team formerly known as Toro Rosso, it ended a 12 year dry spell between victories – the last coming in wet conditions at the 2008 Italian Grand Prix.

Formula 1 remains in Italy for the next event, the first ever world championship grand prix at Mugello starting Friday.