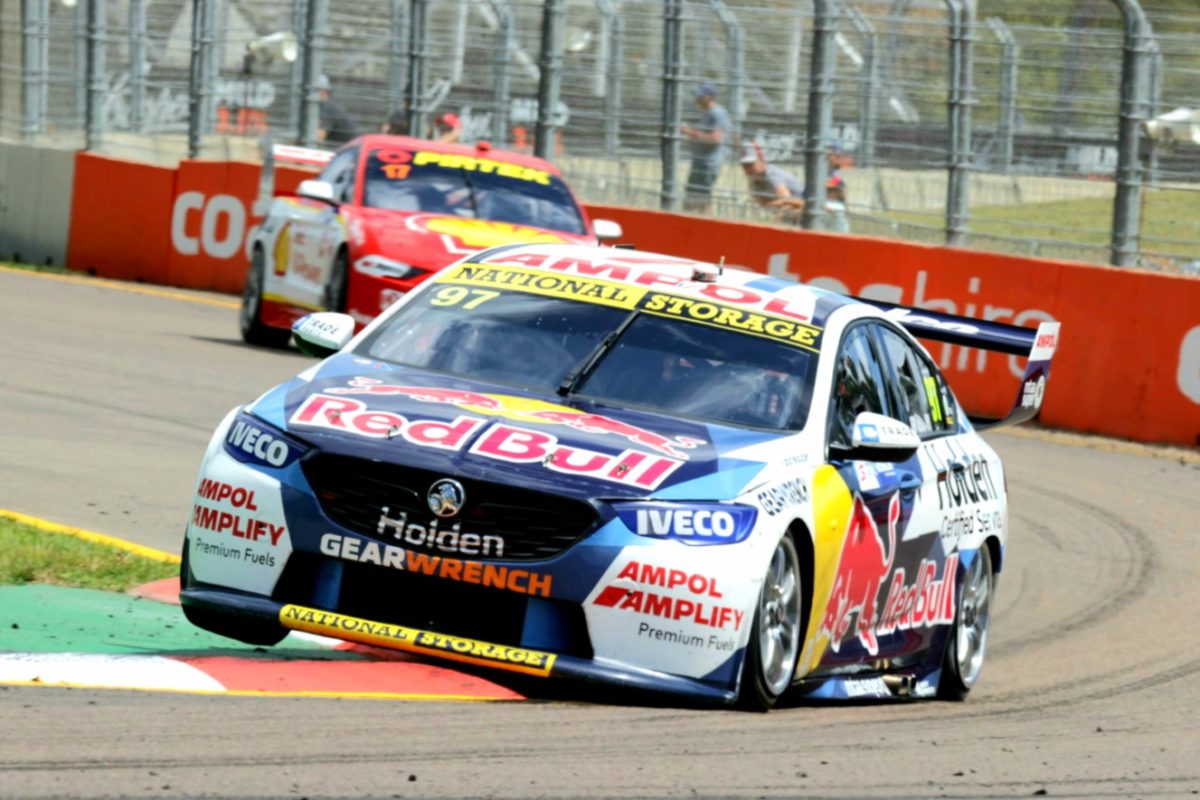 Shane van Gisbergen has scored his first win of the season and Triple Eight Race Engineering’s 200th ever in the Virgin Australia Supercars Championship in Race 23 in Townsville.

Van Gisbergen passed pole-sitter Nick Percat for the lead in the early stages and ultimately took a victory of almost 8.4s over the Shell V-Power Racing Team’s Scott McLaughlin after 39 laps.

Jamie Whincup made it two Red Bull Holden Racing Team entries on the podium in the second race of the Robson Civil Projects Townsville SuperSprint, with Percat home in fourth in the #8 R&J Batteries ZB Commodore.

As such, McLaughlin’s championship lead is a slightly increased 149 points over Whincup.

Percat led McLaughlin (#17 Mustang) to Turn 1 before van Gisbergen (#97 ZB Commodore) braked deep at Turn 2 and nabbed second position by going around the outside.

Van Gisbergen was sticking with Car #8 through the opening laps before making a move under brakes at Turn 13 on Lap 7, and Percat finally ceded first position on the way into Turn 1.

McLaughlin was 4.7s from the lead when he pitted from third on Lap 15 and Whincup, who had been fifth, followed him into the lane.

While both took three new tyres, Whincup closed up to McLaughlin the service and they resumed in 17th and 18th.

They were two positions apart again once Hazelwood, who had held sixth until the stops began, was in and out of the pits a lap later having had only two tyres changed.

Van Gisbergen had put 4.2s on Percat before pitting from the lead on Lap 17 and still had more than a second on McLaughlin as he got up to speed, even after Triple Eight changed all four tyres on #97, while Whincup had cleared Hazelwood.

Waters was officially second when he stopped on Lap 20 for three tyres and resumed between Chaz Mostert (#25 Mobil 1 Appliances Online ZB Commodore), who qualified 13th and pitted from 14th on Lap 12, and Lee Holdsworth (#5 Truck Assist Mustang).

Percat gave up the lead again when he pitted on Lap 21 and rejoined behind Le Brocq, who was fifth of those to have served their stops at that point.

Waters picked off Mostert at Turn 11 on Lap 22 while, just ahead, Percat went up the inside of Le Brocq two corners later and completed the move at the next braking zone.

Waters soon passed Le Brocq as well, before Percat and he similarly both got Hazelwood for an effective fourth and fifth respectively on Lap 23.

As that was going on, Scott Pye (#20 DeWalt ZB Commodore) pitted from the lead and pressed on in 13th, but effectively 11th, the same position as he had qualified in.

When the CPS cycle completed on Lap 24, van Gisbergen’s advantage over McLaughlin was 2.9s and growing, while Whincup held third from Waters, Hazelwood, Le Brocq, Mostert, Holdsworth, Reynolds, and Pye.

Pye was past Reynolds on Lap 25 and Holdsworth on Lap 26 before he picked off Mostert for eighth as they crossed Boundary Street on Lap 27.

On the next lap, he got Le Brocq and Hazelwood, the latter of whom by then had a 15-second penalty hanging over his head for spinning his rears in his pit stop.

Meanwhile, van Gisbergen was continuing to gap McLaughlin and finished 8.3952s up on the DJR Team Penske pilot.

“The weeks we’ve had, my crew’s never given up, we’ve got a win like that and we smoked them. It was awesome.

“It’s going to be hard this afternoon from 12th or 14th (on the grid), wherever we are, but hopefully we can put on a show.”

Whincup circulated about two seconds back from #17 for most of the latter stages and was officially 1.8978s behind McLaughlin at the finish.

Percat, Waters, and Pye claimed fourth through sixth, while Le Brocq was first of those promoted a position due to Hazelwood’s time penalty.

The Tickford driver was therefore officially seventh, ahead of Holdsworth, Mark Winterbottom (#18 Irwin Tools ZB Commodore), and a fading Mostert.

David Reynolds (#9 Penrite ZB Commodore) got home in 15th, having trailed Kelly until a concertina when #15 fanned the throttled after nudging Mostert wide, late in the piece.