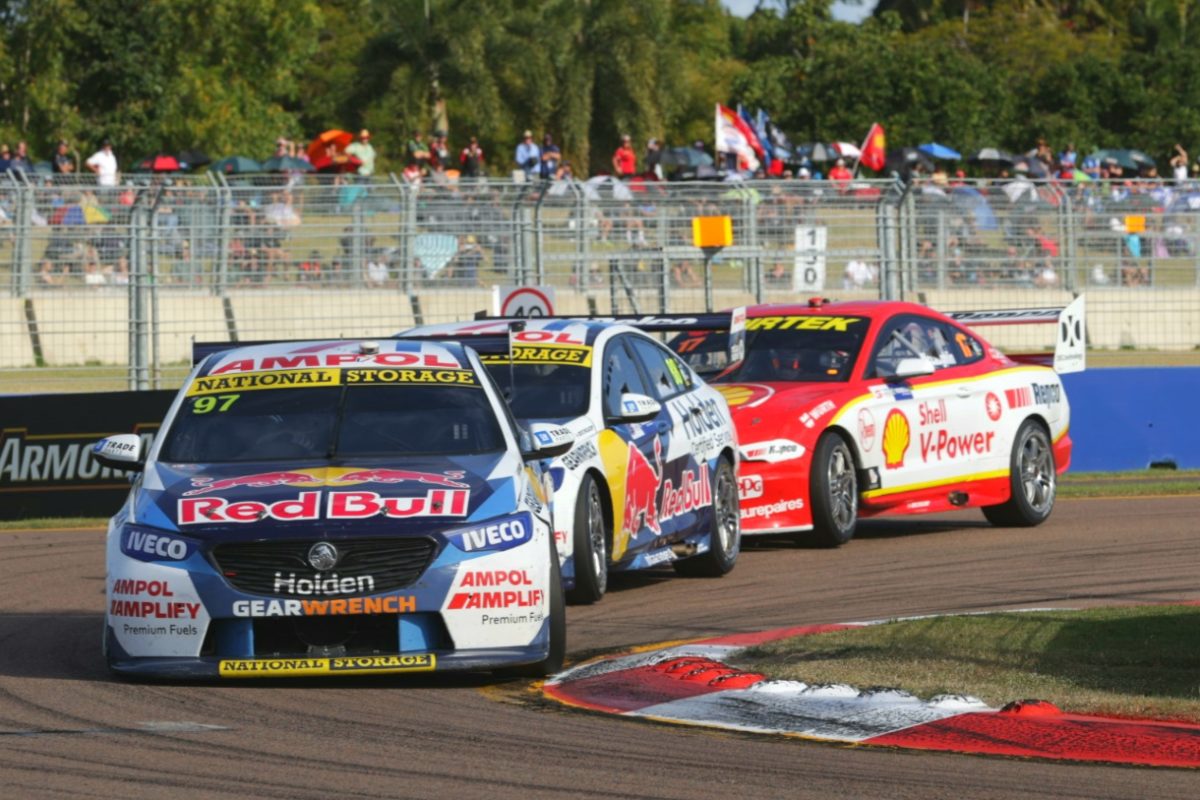 Shane van Gisbergen has led Triple Eight team-mate Jamie Whincup to victory after they ran down Scott McLaughlin in a race energised by a late Safety Car in Townsville.

While it was a Red Bull Holden Racing Team one-two in Race 24 at the Robson Civil Projects Townsville SuperSprint, McLaughlin minimised the damage by just holding off Chaz Mostert to finish third in his Shell V-Power Mustang and take a 143-point championship lead away from North Queensland.

The race came down to a nine-lap sprint to the finish after a Safety Car caused when Penrite Racing’s Anton De Pasquale found the wall at Turn 6.

While van Gisbergen was only ninth at the time, he was a major threat having been last to pit and taken four fresh tyres on his #97 ZB Commodore.

Hazelwood had also used the four tyres which he had up his sleeve for his Race 24 stop while McLaughlin had opted for a big undercut by pitting from eighth on Lap 7 for a three-tyre change.

The DJR Team Penske driver therefore had to play defensive when the restart came on Lap 31, which helped Mostert (#25 Mobil 1 Appliances Online ZB Commodore) to nab fourth from Nick Percat (#8 R&J Batteries ZB Commodore) when they checked up at Turn 11.

McLaughlin helped himself to a lead of over a second when Hazelwood found Whincup in his mirrors, while van Gisbergen, who started the 39-lapper all the way back in 12th, was charging.

Car #97 was third on Lap 33 after van Gisbergen got a run on Hazelwood through Turn 10 and made the textbook move under brakes.

He set the fastest lap next time around and the Triple Eight pair soon caught McLaughlin, before Whincup let his team-mate go under brakes at Turn 2 on Lap 36.

Van Gisbergen lunged down the inside of #17 at Turn 11 on that lap, taking both wide and allowing #88 to follow him past.

“I had a great car, got stuck in the first stint and it was going to be interesting trying to get back to the podium but the Safety Car worked out perfectly.

“It was a big battle at the end, tried to do the team thing to help Jamie, awesome.”

McLaughlin only just held on to a podium, Mostert getting Hazelwood on Lap 34 and then putting big pressure on the #17 Mustang.

Behind the first-year Walkinshaw Andretti United finished a former WAU driver in Scott Pye (#20 DeWalt ZB Commodore) with yet another strong run home, this time to fifth.

Hazelwood ended up sixth having led all the way until his pit stop on Lap 17, and Percat finished seventh after holding second position until he was passed by Mostert on Lap 15.

Cameron Waters finished 12th but arguably deserved more given he was the innocent victim of a messy incident on Lap 15.

Percat pinched a brake and ran wide at Turn 11, which allowed Whincup to move into third, but also meant a slightly awkward manoeuvre for the Brad Jones Racing driver to get into the pits.

That caused Waters to check up and his #6 Monster Energy Mustang went spinning into the infield thanks to a hit from van Gisbergen.

Officials looked at the incident but decided to take no further action, presumably siding with the view which van Gisbergen expressed over the radio about not being able to avoid contact.

De Pasquale and Chris Pither were both DNFs, the former due to a right-front failure which sent the #99 Commodore off the road while running an effective fifth or sixth.

The latter copped damage to his #22 Coca-Cola ZB Commodore in an opening lap skirmish.

The next event is the Repco SuperSprint The Bend on September 19-20.