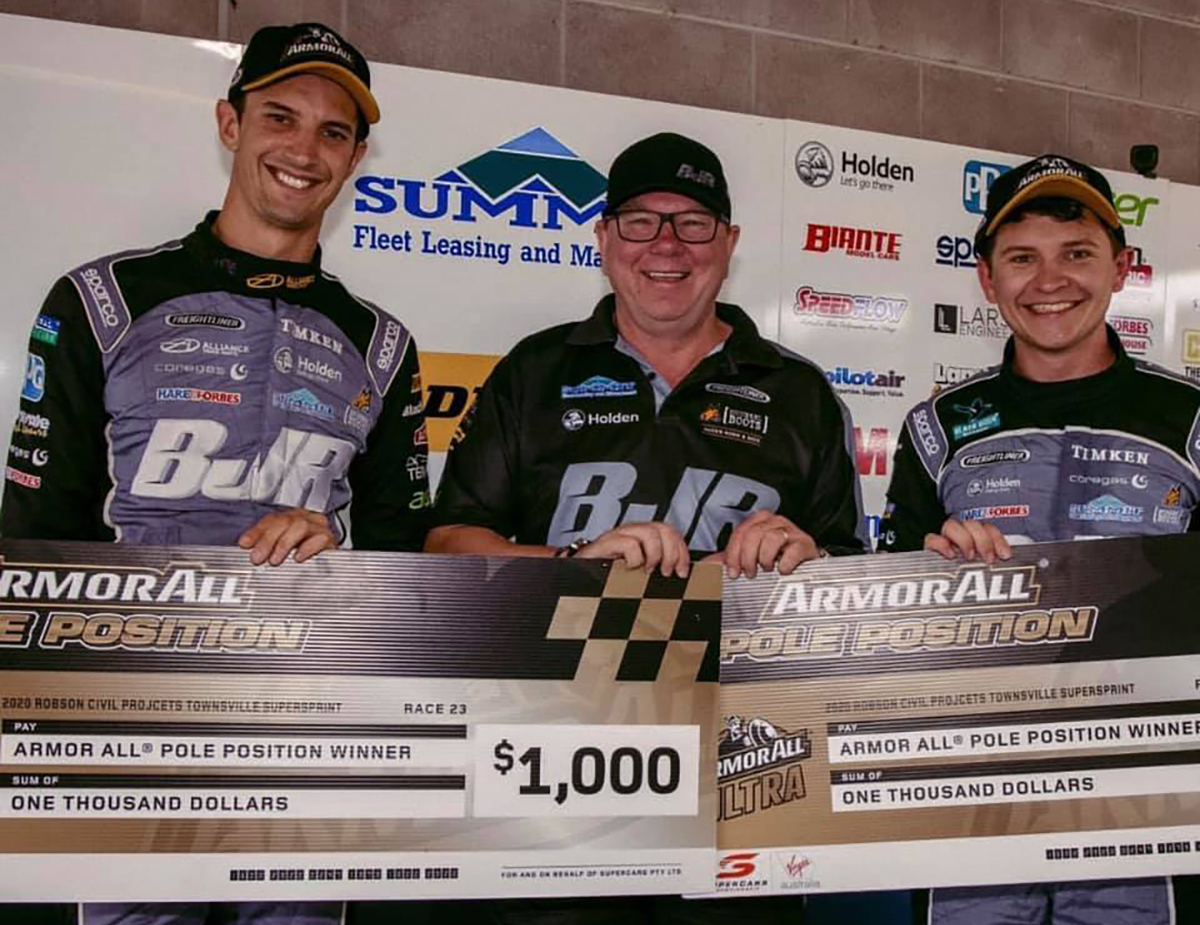 Brad Jones Racing drivers Nick Percat and Todd Hazelwood, and team boss Brad Jones himself, have expressed their delight at taking both poles for the Sunday races in Townsville.

Not only did Percat and Hazelwood each become Virgin Australia Supercars Championship pole-sitters in consecutive sessions, they will start side-by-side for Race 24 which closes out the event this afternoon.

The former has already taken his first two race wins for BJR this year, in each of the Sydney events, and said the latest feat proved the Albury-based squad’s progress.

“We had a little swing (at set-up), very small,” explained Percat.

“It maybe came around a bit sooner than we thought (but) we’ve been really working hard on that qualifying pace.

“It’s so hard to pass in these cars so trying to qualify inside that top five or six all the time is the key.

“For us, mega job and massive congrats to Todd as well. I’ve been so close to pole for so long and missed out by what he got me in that second one for a few of them and now to finally get one is awesome.”

Hazelwood had previously qualified as high as fourth, during his two years with Matt Stone Racing, and was also jubilant about his achievement.

“When you put all the effort in and you finally get the reward, it’s super rewarding. It’s just a huge credit to the crew, they’ve worked so hard during this time.

“It’s Father’s Day and we had a pretty moving video of all the families at home wishing all their dads a Happy Father’s Day so it’s full credit to those guys. They’re the ones making it happen for us and just super thankful.”

Percat would, of course, by now be a two-time fastest qualifier but for the efforts of his team-mate, who beat him by just 0.0220s in the latter session.

Hazelwood attributed some of his success to the result in the first hit-out of the morning.

“We gave it a little tune-up, we made the car a little bit nicer in the drive phase out of Turns 8 and 11, and we knew that was our deficit to Nick,” he explained.

“Obviously it’s handy when you’ve got a guy that was top of the timesheets, the session before, because you can basically do the copycat and try and do a little bit better.

“So, it was full send, we fed the duck some bread, and we just absolutely sent it so it was a lot of fun.”

The poles are the first for BJR since 2016, when Tim Slade qualified fastest on the Saturday at Winton and went on to win both races.

“When you think back where Kim (Jones, brother) and I started all those years ago to where we are today…

“We’ve been in this position before where we’ve had fast cars, but it’s always great.

“To have Nick’s first pole today and Todd in the very next one to be on pole and to have two cars at the front is fantastic. In these difficult, difficult times it’s nice to get a bit of cream.

“It’s always very rewarding to be able to get in amongst the Triple Eight and the DJR (Team) Penske juggernaut, but I feel like this year we’ve come out of the blocks and been quite competitive.

“We’re just chipping away at it and today’s a great day for us. We need to convert in the races and that’s more than half the battle, but you’ve also got to stop and smell the roses when you get an opportunity.

“The truth is, I’d like to think we should be able to convert at least one podium out of all that.

“It’s going to be pretty tough for Todd; it’s his first pole position, a lot of pressure he’s going to feel.

“Nick is more of a seasoned campaigner and he knows how to convert. Beating (Scott) McLaughlin, and (Jamie) Whincup, and Shane (van Gisbergen), and all those guys – (Cameron) Waters this weekend – is very, very difficult.

“Podiums is what I’m aiming for. What that actually looks like, I’m not 100 percent sure until we see how the cars are in the race.”

Race 23, for which Percat will be on pole and Hazelwood will start seventh, gets underway at 12:05 local time/AEST.