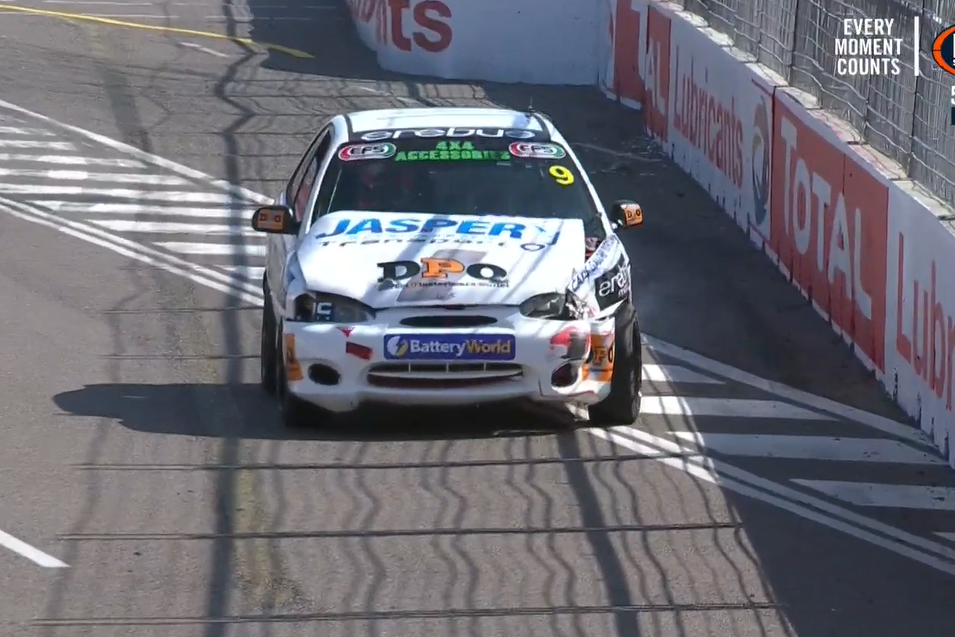 Cam Bartholomew held on to win Race 1 of the EFS 4×4 Accessories Excel Invitational in Townsville but Will Brown ended up in the wall.

Brown, one of four Super2 drivers taking part in the category, had made a terrific start to the race after qualifying 12th.

He was running seventh at the time of the crash, when contact at Turn 2 ended his race prematurely on Lap 6.

Brett Parrish rode up over the inside kerb and launched into the side of Brown, which caused the Erebus Supercars driver to fire into the outside wall.

When racing resumed, there was an exciting battle at the front with pole-sitter Bartholomew fighting hard to retain his lead.

Cam Wilson pushed him all the way before settling for second, while Super2 rivals Broc Feeney and Brodie Kostecki engaged in a thrilling duel just behind them.

Kostecki looked to have snatched third place with a smart move on the penultimate lap but it was roles reversed with just a few corners to go as Feeney reclaimed the spot.

Von Rappard set the early pace with a 1:20.353s in Session 1, his Stohr going round the street circuit more than seven seconds quicker than anyone else.

It was a similar story in the second 20-minute session as Von Rappard clocked a 1:21.098s.

The field of more than 30 local drivers were racing the clock rather than each other in the invitational category.

What had previously been a fairly placid second session ended under red flags following a major shunt at Turn 3. The car involved ploughed deep into the tyre barrier, repairs to which took so long the subsequent Supercars practice session had to be delayed.

Having topped the timesheets a week earlier, Paul Morris swapped his Jaguar XJS for the Toyota 86 which his son Nash Morris drove in the Townsville Tin Tops.