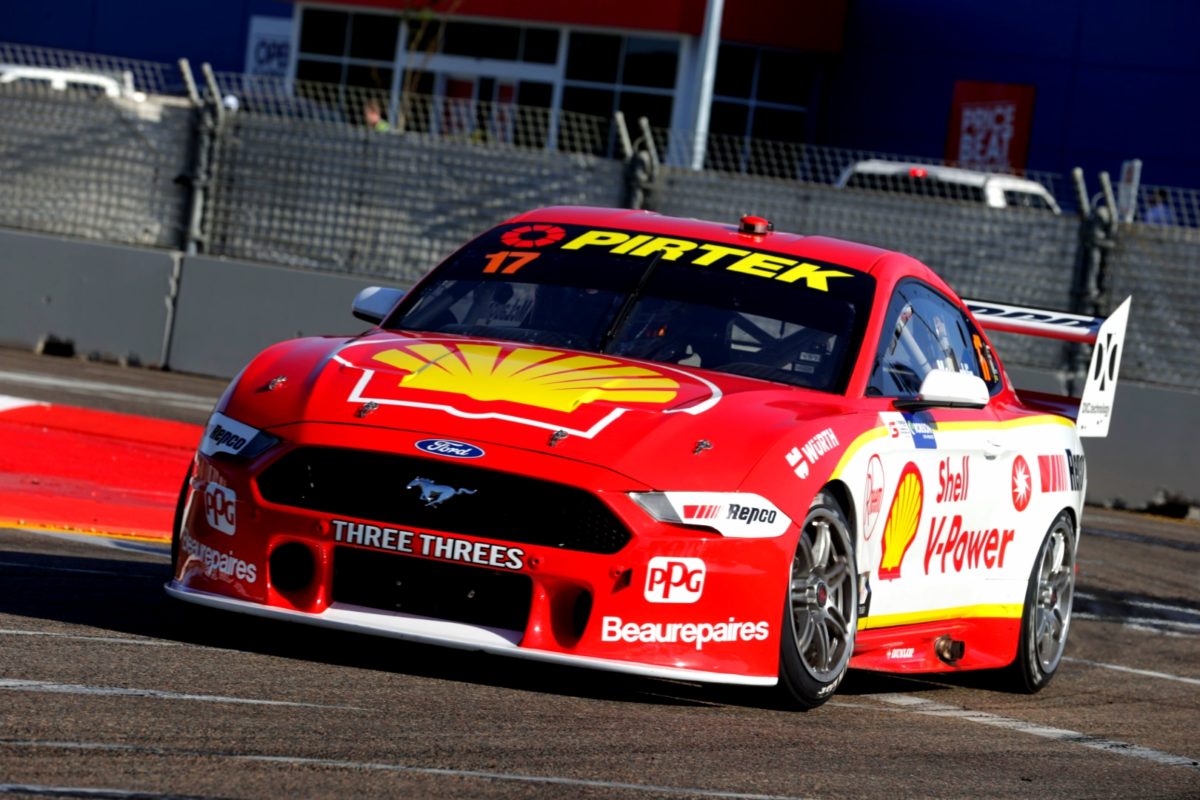 Scott McLaughlin was a comfortable winner in Race 22 at the Robson Civil Projects Townsville SuperSprint while Jamie Whincup finished fourth.

Chaz Mostert completed the podium at another 7.3258s further back, while Whincup’s bid for track position with a two-tyre pit stop was effectively neutralised by the time he reached the finish, and he now trails McLaughlin by 143 championship points.

Whincup did gain one position from where he emerged after the opening corners, but that was at the expense of Red Bull Holden team-mate Shane van Gisbergen, who retired with a power steering failure.

McLaughlin led the field to the first corner from pole position, ahead of van Gisbergen (#97 ZB Commodore), Mostert (#25 Mobil 1 Appliances Online ZB Commodore), and Waters (#6 Monster Energy Mustang), while Whincup wrested fifth from David Reynolds (#9 ZB Commodore) as they turned right into the permanent section of the Reid Park Street Circuit for the first time.

Reynolds had dropped about two seconds from the top five, each of whom were separated by around a second from each other, when Penrite Racing team-mate Anton De Pasquale (#99 ZB Commodore) went down his inside at Turn 2 on Lap 7.

Nick Percat (#8 R&J Batteries ZB Commodore) then got by Reynolds at Turn 3 on Lap 9, as McLaughlin stretched his lead over van Gisbergen beyond two seconds.

Scott Pye (#20 DeWalt ZB Commodore) had shown strong pace early on and, having qualified 17th, was into the top 10 when he passed Bryce Fullwood (#2 Mobil 1 Middy’s ZB Commodore) at the end of Lap 12

Pye then went down the inside of Fabian Coulthard (#12 Shell V-Power Mustang) at Turn 11 on Lap 15 in a move for eighth, given he did so as Reynolds ran long with a power steering issue.

Whincup was still fifth when he pitted on Lap 16, along with Coulthard from ninth, and the former pinched track position with a two-tyre stop.

McLaughlin enjoyed an advantage of 3.9s on van Gisbergen when the race leader peeled off on Lap 17 for three tyres, and rejoined around three seconds up on Whincup.

Mostert was in and out of the pits at the end of Lap 19 for a three-tyre change which saw him give up a spot to Whincup, and Waters split them after he also stopped for three tyres on the following lap.

Van Gisbergen, meanwhile, was still circulating in the nominal race lead before he pitted on Lap 21 with power steering fluid belching from his car, which caused him to almost skate into the wall at Turn 10.

Triple Eight put three rubber shod wheels and a new, larger steering wheel on the #97 ZB Commodore, and sent the New Zealander on his way.

However, officials responded by showing a mechanical black flag and that was the end of his afternoon.

Waters got past Whincup for an effective second at Turn 13 on Lap 23 and Mostert pulled off a similar, although arguably bolder, move on Lap 24.

Although Waters chipped a couple of tenths out of that margin, McLaughlin was untroubled thereafter, while Mostert put five seconds between himself and Whincup by the time they reached the chequered flag.

“We had a great qualifying car, which we worked on all this morning,” said McLaughlin.

“We didn’t touch the race car at all from last week so it bodes well for us.

“I’m feeling really happy, a bit tired but it’s all good. I’m pretty happy, just hot when I get out of the car.

“It’s fine, we’re good as gold and we’ll press on tomorrow without it (the cool suit).”

De Pasquale was a touch under two seconds further back from Whincup in fifth at the end, ahead of Percat, Coulthard, and Le Brocq.

Pye took ninth after a stoush with Kelly on Laps 32 and 33, and James Courtney also got the 2006 champion on Lap 35 to drive his #44 Boost Mobile Mustang into 10th.

Andre Heimgartner made it to the end in 18th despite an intermittent misfire in the #7 Ned Mustang, while van Gisbergen and Reynolds were both DNFs.

The Virgin Australia Supercars Championship field is back on track tomorrow from 09:40 local time/AEST for a pair of 10-minute qualifying sessions.