Murphy would ‘bail out’ of Ambrose crash today

Murphy would ‘bail out’ of Ambrose crash today 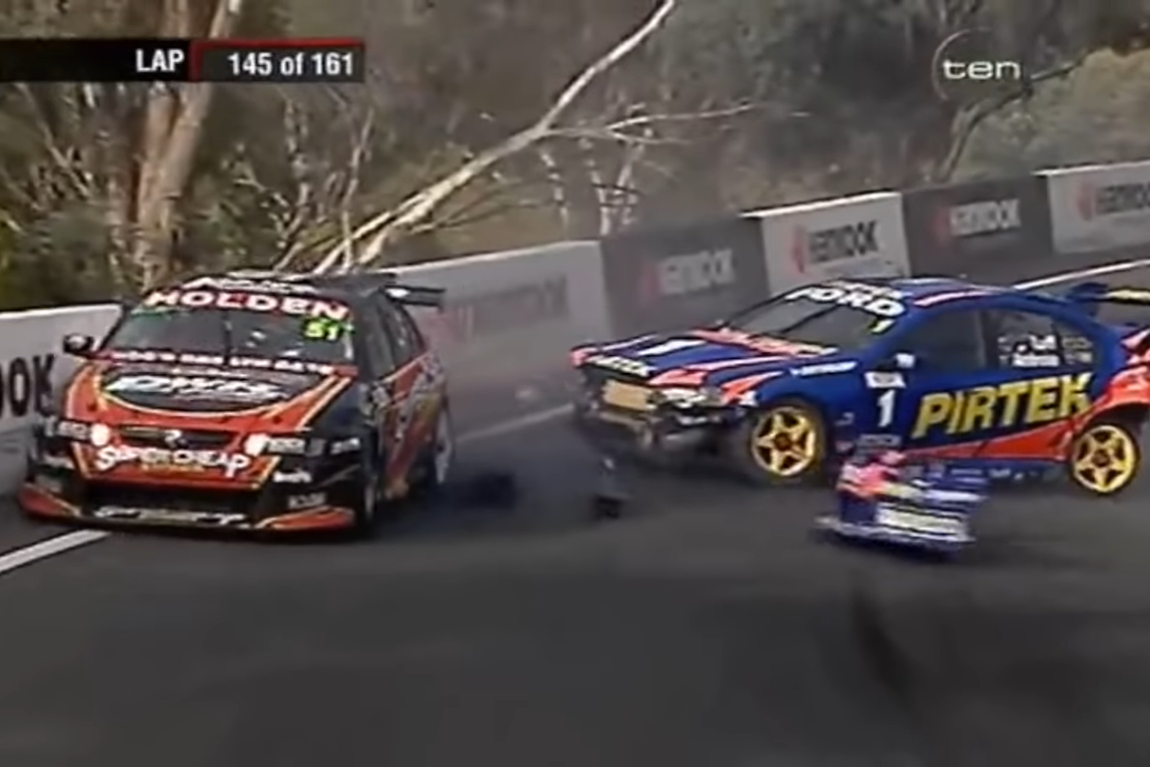 Greg Murphy admits that he would have given Marcos Ambrose the corner if he had his time over again in their controversial 2005 Supercheap Auto Bathurst 1000 crash.

Ambrose had attempted to pass Murphy for fourth on the outside of the kink which precedes The Cutting on Lap 145 when contact occurred which nearly put the former’s Pirtek Falcon over the wall on driver’s right.

A fiery on-track exchange followed while the circuit was temporarily blocked by several other cars which were caught in the mess, with the race having restarted from a Safety Car period on that lap.

Murphy now believes that the fight was not worth it, given what was on the line at the time.

“I tell you right now, if I knew what was going to happen I would have actually not have been as pig-headed to try and hold my line through that corner, and bailed out of that one and let him have it,” Murphy told the V8 Sleuth Podcast.

“We were out of it, we were fourth and fifth, and we weren’t going to win, neither of us… I doubt we were going to get the podium. The guys ahead of us, everyone was trucking along pretty good.

“It was a bit of a struggle of a day, and from what I remember, I was pretty comfortable. Marcos, I don’t think, had anything special as far as speed goes on me.

“I got baulked heavily by, I think, David Besnard going into Griffins Bend. He sort of turned down on me when I was trying to pass him and I lost all my momentum, and that allowed Marcos to come up alongside.

“It was just one of those pig-headed moments where he wasn’t going to give in and I didn’t give in.

“He had his nose ahead but there was no pass completed. I’ve always been quite open about the fact that I believe we both contributed to it and I always was happy to take 50 percent of the blame for it because it was a goddamned mess.

“We’ll agree to disagree, I’m sure, but it was just a shit sandwich that I sort of wish never had happened, obviously.

“If I had my time again and I could bloody go and repeat it, knowing what has happened, you probably would bail out of it.”

Murphy was by then in his first season at the Supercheap Auto-backed Paul Weel Racing, but had been part of the rivalry which developed between his former team of Kmart Racing and the Stone Brothers Racing outfit which Ambrose drove for, in the preceding campaigns.

The New Zealander nevertheless maintains he has great respect for the Tasmanian who was already on his way out of Supercars to tackle NASCAR.

“It’s not like it was a great moment of my life and my career and not for him either, and it just added fuel to probably the fire that was already burning between us anyway,” Murphy said.

“I’ve got a huge amount of respect for the guy; I think his ability behind the wheel of a racing car was proven. He won two championships and went off to America and, as far as I’m concerned, did great things over there; achieved a lot, so kudos to him for that.

“It was just messy up there that day and there was already a bit of a festering scab between the two of us, and that just made it a whole lot worse.

“The other thing is there were a lot of other people caught up that didn’t deserve to be caught up in our shit – or my shit or his shit, or whatever – that blocked the track and damage was done to other cars, all that kind of thing.

“I didn’t want that to happen and it was almost a little embarrassing.”

The top three at the time remained that way for the rest of the afternoon, meaning victory for the Holden Racing Team’s Mark Skaife and Todd Kelly, ahead of Tasman Motorsport’s Jason Richards and Jamie Whincup, and Triple Eight’s Steven Ellery and Adam Macrow.