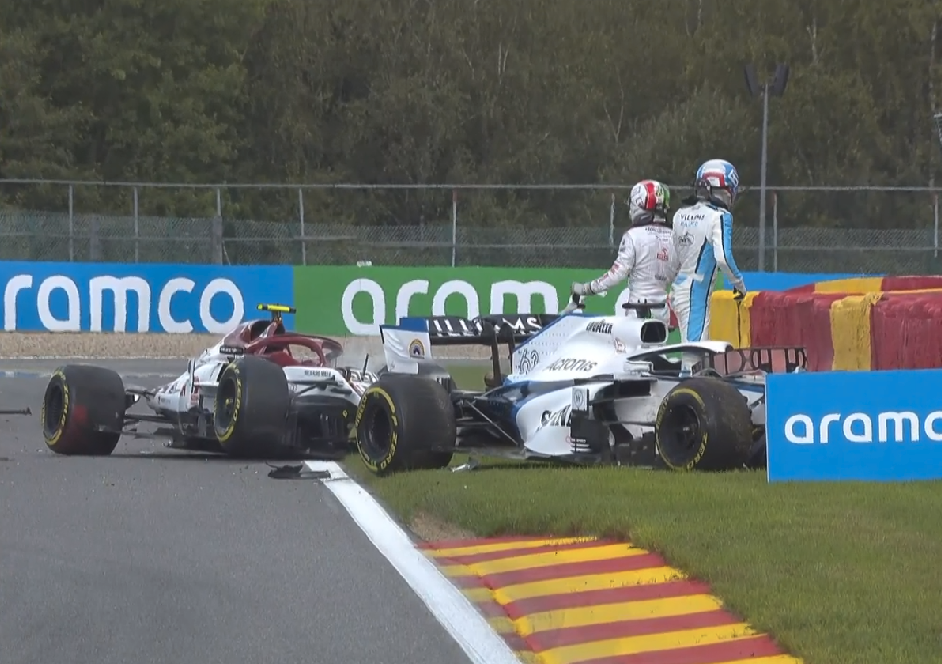 Williams driver George Russell has said he’s thankful for the halo after he crashed out of the Belgian Grand Prix.

The Alfa Romeo driver lost control of the car, firing him into the barrier on driver’s right before bouncing back out onto the circuit.

As Russell arrived on the scene he was left nowhere to go as debris and Giovinazzi’s stricken car littered the road, striking an errant wheel which broke his front suspension.

“If I went to the right, that’s where Antonio’s car was, and at the left side of the track, I had a massive impact with the tyre,” Russell recounted.

“I have to say you feel much safer in the car now with the halo.

“When I saw this massive tyre coming towards me, it was quite scary to be honest, So I’m very thankful that we have this halo on the car right now.

Giovinazzi offered his apologies to Russell for the incident, which occurred while running immediately head of team-mate Kimi Raikkonen on track.

“Unfortunately I had a snap of oversteer on the exit, nothing I could do,” he explained.

“I’m just sorry for my team after what happened today. But I have to reset my mind right now for Italy.

“I feel really sorry for [Russell], as I destroyed his race as well. Really unfortunate what happened to him. I’m just sorry.”

Both Russell and Giovinazzi were unharmed in the incident, the pair climbing free of their respective cars.

The Safety Car neutralised the race for the crash as clean up work was carried out, with all bar Sergio Perez and Pierre Gasly taking to the pits for fresh tyres.

It was the most significant moment of the race, with Mercedes double-stacking its drivers in the lane but maintaining its one-two advantage from there to the flag.

Meanwhile, Russell and Giovinazzi were the only retirements of the 44 lap affair, Carlos Sainz having never taken the start after a problem was found with his power unit.