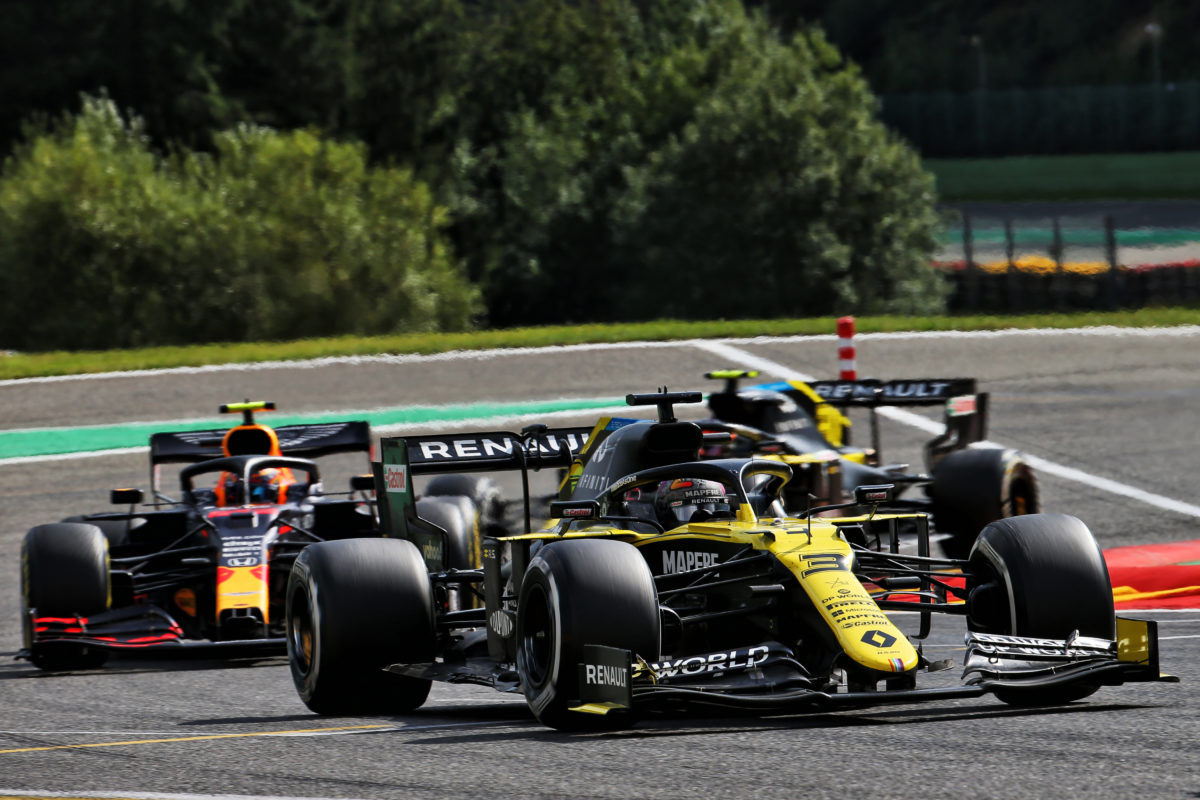 Daniel Ricciardo was left frustrated by the off-sequence strategy used by Racing Point and AlphaTauri during the Belgian Grand Prix.

The Australian driver equalled his best result for Renault with fourth, and was closing in on third placed Max Verstappen in the final laps.

The Perth native had been running fourth until the Safety Car interrupted affairs when Antonio Giovinazzi and George Russell crashed heavily on Lap 10.

While Renault pitted Ricciardo, neither Sergio Perez nor Pierre Gasly took to the lane, and both moved ahead on the road.

On older tyres, the pair could not match the pace of the race leading Mercedes or even Verstappen in third, which saw the Dutchman extend an insurmountable gap as Ricciardo lost time as he found a way passed.

“We had a lot of pace; I was just, I was a bit frustrated,” Ricciardo told Sky Sports F1

“It’s out of our control, but Gasly and Perez’s strategy, obviously it put a bit of a buffer in between Max and myself on the restart.

“Without that I think genuinely think we could have hung with (Verstappen) on the hard (compound tyres).

Ricciardo’s pace in the latter stages was such that he claimed the bonus point for fastest lap on his final tour of the Spa-Francorchamps circuit.

Despite his late pace, Ricciardo believes he maximised his chances given the circumstances he was dealt during the race.

“The pin was out as soon as we passed Gasly, really,” he reasoned.

“I think fighting with Perez and Gasly, the tyres overheat so it takes a few laps for them to come back, and then once it did it kind of crept up, crept up.

“I wasn’t really leaving anything on the table and then the last lap I put everything into it, but that wasn’t sustainable to hit those laps for much longer.

“I feel I used everything.”

Ricciardo started the race fourth and found himself wheel to wheel with Verstappen on the opening lap as they battled for third.

The Australian used the slipstream on the Kemmel Straight, drawing alongside his former Red Bull team-mate heading into Les Combes.

Through the right-left-right combination they ran side-by-side, Ricciardo leaving the track briefly and then Verstappen.

Their battle was ultimately resolved in favour of the Red Bull driver at Bruxelles.

“I was trying to overtake and if he was to pass me so later so be it,” he explained.

“It wasn’t worth putting myself out in the first few corners, I guess that’s what I’m trying to say.

“I was obviously trying but keeping that one percent of maturity and discipline in me.”

Fourth place in Belgium moves Ricciardo into eighth in the drivers’ championship with 33 points to his name, equal with Perez and seven clear of Renault team-mate Esteban Ocon who finished fifth.

Formula 1 now heads to Monza for the Italian Grand Prix next weekend.