McLaughlin hits back in Race 21 in Townsville

McLaughlin hits back in Race 21 in Townsville 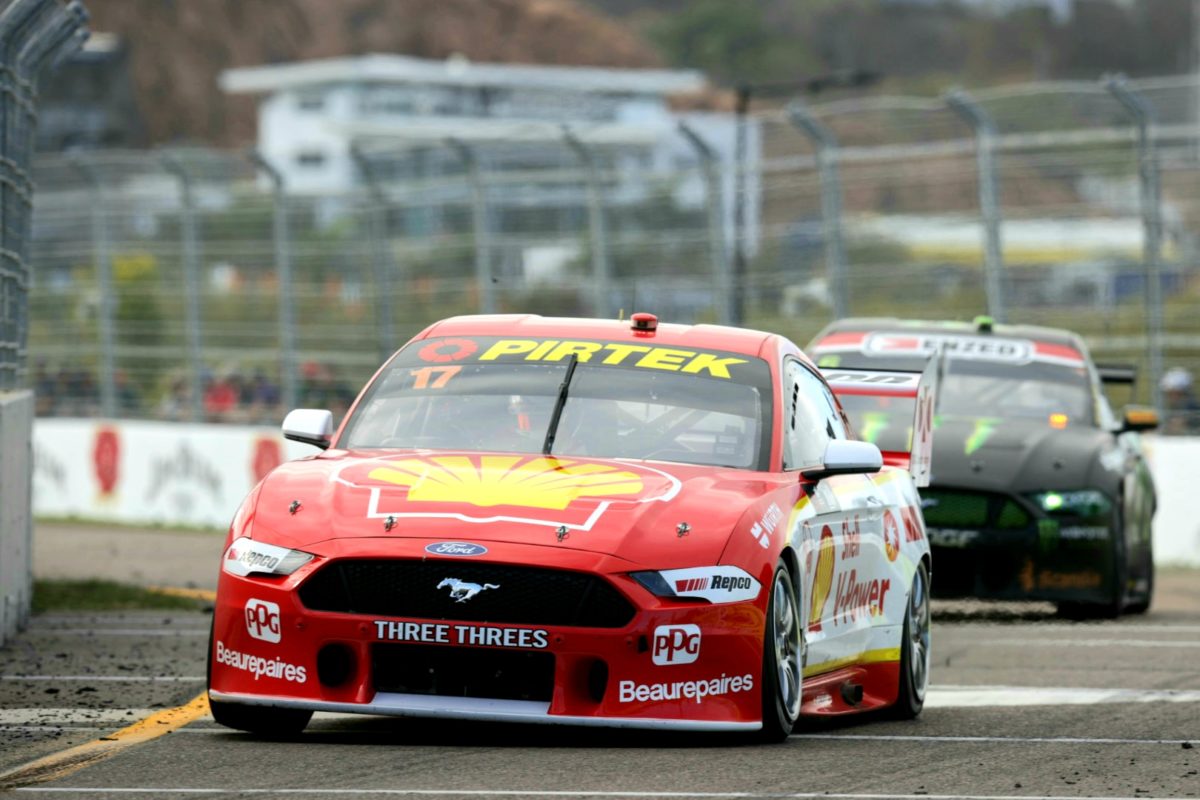 Scott McLaughlin has seen off intense pressure from Cameron Waters to return to winning ways in Supercars Championship Race 21 at the NTI Townsville SuperSprint.

Brad Jones Racing cars finished fourth and fifth courtesy of Nick Percat and Todd Hazelwood, respectively, while Scott Pye climbed from 15th on the grid to sixth and Shane van Gisbergen rose from 13th to eighth.

After podiums in each of the first two races of the weekend, Chaz Mostert finished last of the 24 starters and barely on the lead lap having suffered a flat tyre along the 39-lap journey.

McLaughlin (#17 Mustang) took a clear lead from pole to the kink on Boundary Street, where Percat (#8 R&J Batteries ZB Commodore) and Whincup (#88 ZB Commodore) arrived either side of the other front row starter, namely Waters (#6 Monster Energy Mustang).

Whincup slotted in behind but Percat stuck with Waters and claimed second position for the right-hander into the parklands section, but only held it until the Tickford driver re-passed at Turn 2 on the next lap.

That was one spot back from where van Gisbergen qualified and he lost another on Lap 2 when Pye (#20 DeWalt ZB Commodore) came from deep to pass at Turn 11.

Waters was hanging around 0.7s back from McLaughlin in the early stages as the other DJR Team Penske entry of Fabian Coulthard (#12 Mustang) circulated in 20th after stalling at the start, and van Gisbergen retained 15th when Andre Heimgartner (#7 Ned Mustang) could not hold onto a move at Turn 11.

Van Gisbergen gained a spot when he went inside of Bryce Fullwood (#2 Mobil 1 Middy’s ZB Commodore) at Turn 2 on Lap 10, then got Jack Le Brocq (#55 Supercheap Auto Mustang) for 13th on Lap 12.

By then, McLaughlin had edged to just over a second clear of Waters, while Winterbottom passed Reynolds for sixth at Turn 3 on Lap 14.

Pye had continued to make inroads and relieved Mostert of seventh, although effectively 10th, on Lap 16.

Percat was the first of those near the head of the field to pit, on Lap 15 with Reynolds, and Tickford called Waters in on Lap 16.

The Campbellfield squad swapped all four tyres on Car #6 and DJR Team Penske responded by bringing McLaughlin in a lap later for three almost new hoops.

What followed was several laps of vigorous racing as Waters hounded McLaughlin and had a number of half-looks under brakes.

They caught Coulthard before he had served his compulsory pit stop and he let them go at Turn 2 on Lap 24.

Whincup was still circulating in the official race lead until he peeled off at the end of Lap 25 and Triple Eight changed rears only.

That made the difference in getting #88 back out effectively in third position, just ahead of Percat, given the #8 BJR entry had taken four tyres.

Coulthard was 23rd but armed with fresh tyres, and Mostert sat 24th after the tyre drama.

Pye passed Reynolds on the run to Turn 2 on Lap 28, Hazelwood got the other Erebus car of De Pasquale for fifth on Lap 29, and then Pye too moved by De Pasquale on Lap 31.

At the chequered flag, it was 4.1601s between #17 and the #6 Mustang of Waters, with Whincup 1.7536s further back having well and truly shaken Percat.

The latter got home in fourth, ahead of Hazelwood, Pye, De Pasquale, van Gisbergen, and Holdsworth.

Winterbottom rescued a top 10 despite giving up considerable time with a pit stop drama, Reynolds finished 11th, and Coulthard got back up to 17th.

Once again, proceedings unfolded with plenty of cloud around Townsville but no precipitation came.

In net terms, McLaughlin gave up 54 points to Whincup over the course of the weekend after results of seventh and sixth in the first two encounters.

“We found direction this morning in qualifying, so that’s a great start for us for next week,” said the Race 21 victor.

“I was happy to get the start; it was an awesome battle with Cam. Still a little bit of work to do, but really happy. Proud of everyone at Shell V-Power Racing, continually working hard; to get a win on a tough weekend is a great thing.”

Mostert holds onto third in the drivers’ championship despite his lowly finish, although van Gisbergen is now only 15 points behind.

In the teams’ standings, Triple Eight Race Engineering is 16 points up on DJR Team Penske.