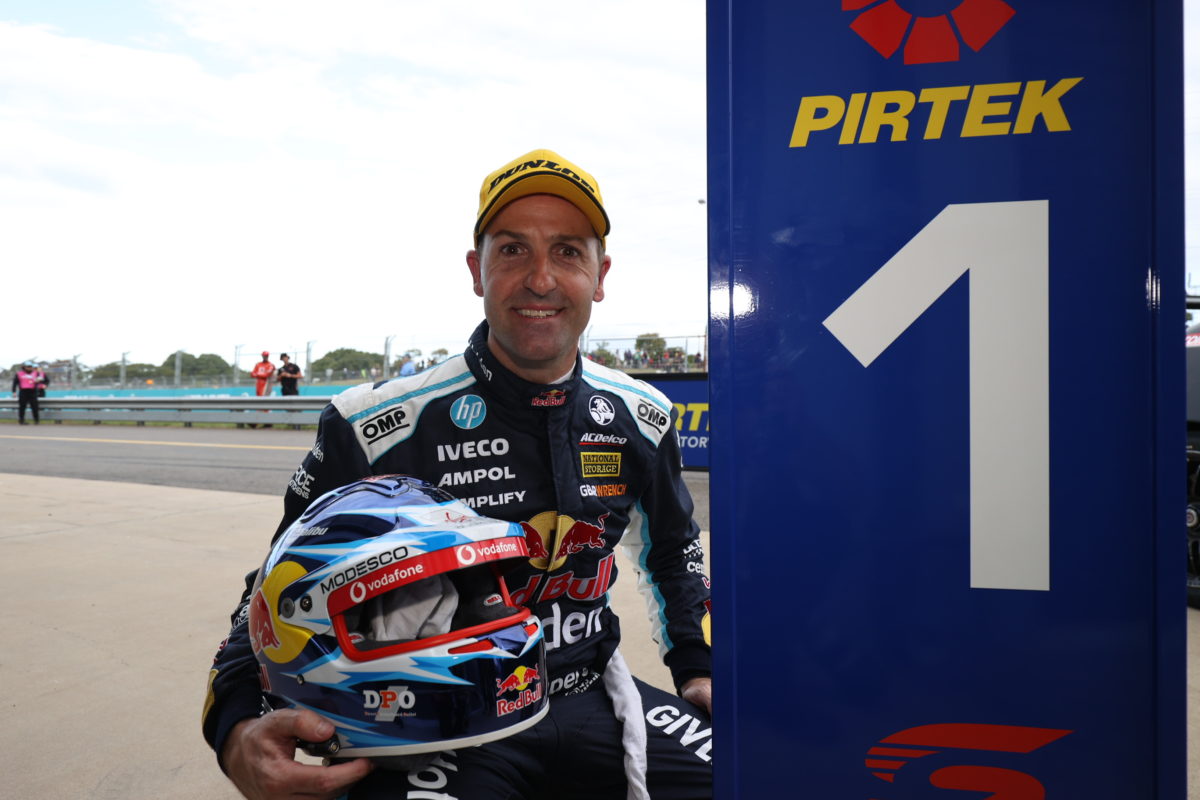 Jamie Whincup poses for a photograph without his car, which was left on the main straight

Jamie Whincup has been fined for not returning to pit lane on his cool down lap as a result of a radio problem and confusion regarding the chequered flag.

Stewards opted, however, to take no further action regarding the messy opening to Race 19 at the NTI Townsville SuperSprint in which fellow Red Bull Holden Racing Team driver Shane van Gisbergen and several others copped damage.

Whincup parked the #88 ZB Commodore on the main straight, 40 laps after lights went out to signal the start of the 39-lap race which he would go on to win, but should have brought it back into the lane.

Explained Whincup before the decision was announced, “I pitted, then my radio went down straight after the pit stop.

“I thought it was the last lap but then I couldn’t see the chequered flag.

“I just remember the old man always said ‘Just keep going until you get the chequered flag,’ so I thought I’d keep going.”

No driver was deemed wholly responsible for the incident which unfolded at the first braking zone of Race 19 of the Virgin Australia Supercars Championship and saw van Gisbergen and several others copped damage.

The Triple Eight driver ultimately finished 19th, nine laps down, after a long spell in the pits for repairs to his #97 ZB Commodore.

He had turned Anton De Pasquale around at Turn 2, leading to further hits with the Penrite Racing pilot and Todd Hazelwood, but it was not clear whether van Gisbergen was actually at fault or he too had been an innocent victim of a not unusual concertina.

As such, the matter was sent to a post-race investigation.

“After the Race, the Race Director investigated the Incident involving contact between multiple Cars at Turn 2 on Lap 1 together with the DSA, which involved a review of all of the available vision, including Broadcast vision and in-car judicial cameras from Cars #5, #8, #17, #18, #19 and #44,” stewards advised.

“The DSA and Race Director were not able to determine on the available evidence that any Driver was wholly responsible for the incident.”

Van Gisbergen is nevertheless now 377 points behind championship leader Scott McLaughlin, having given up another 32 points to the Shell V-Power Racing Team driver and ceded third in the standings to podium finisher Chaz Mostert.

Ironically, McLaughlin also copped damage in a virtually simultaneous nose-to-tail run-in but was able to sidestep the more serious carnage which unfolded ahead, and emerge eighth for the run up Charters Towers Road having qualified 16th.

He would go on to finish seventh and therefore restrict the gains of Whincup, his nearest championship rival, to 36 points, while De Pasquale recovered to 10th.

Those not so lucky included Brad Jones Racing team-mates Hazelwood and Macauley Jones, both the Kelly Racing cars of Andre Heimgartner and Rick Kelly, and Matt Stone Racing’s Zane Goddard.

Kelly finished a lap down in 17th in the Castrol Mustang and the other four of those aforementioned five retired, although Hazelwood’s final drama was engine-related.

James Courtney was not penalised for an alleged “breach of Pit Lane safety” which Erebus Motorsport requested an investigation of after no evidence was found to establish such a breach.