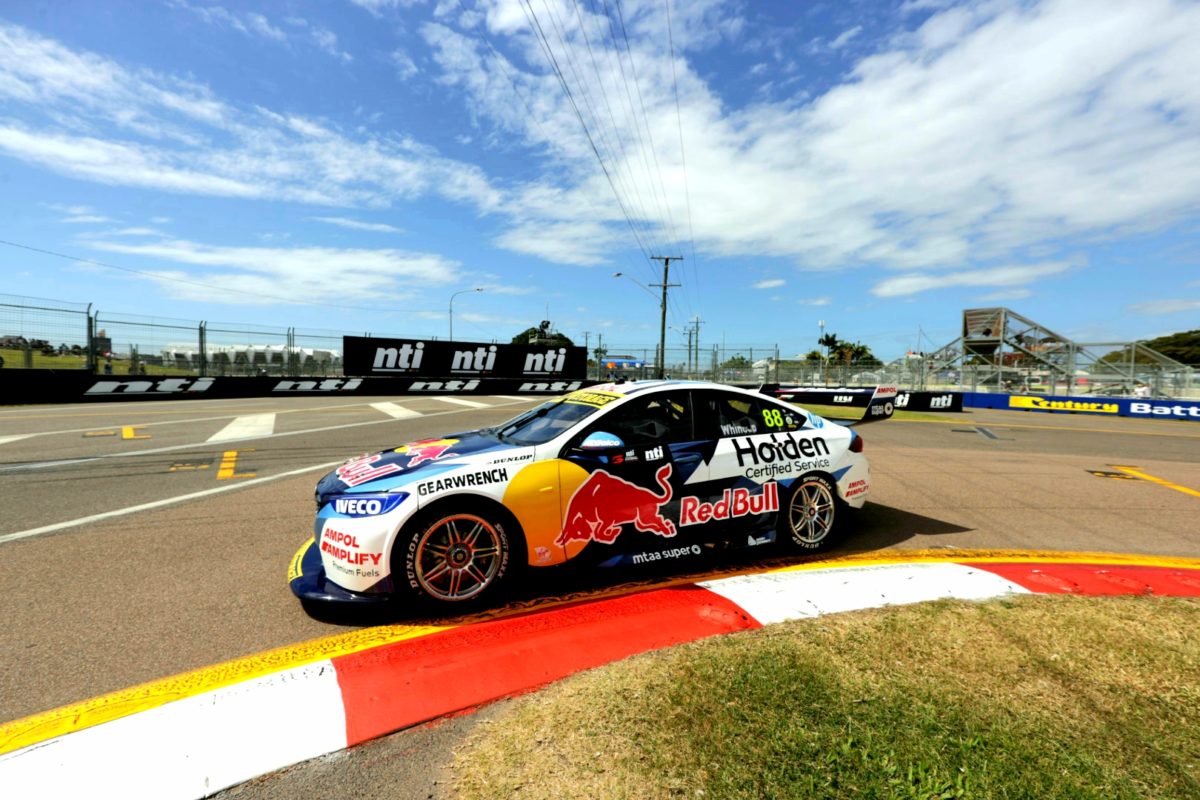 Jamie Whincup has qualified on pole for Race 19 at the NTI Townsville SuperSprint while Scott McLaughlin missed the Top 10 Shootout by six positions.

McLaughlin clocked a 1:12.7319s on his only flyer in Part 2 of qualifying, which would prove to be 0.2099s slower than required to make it into the one-lap dash which followed.

Despite having again run with new tyres on his Shell V-Power Mustang, it was also 0.3637s slower than the championship leader had managed when he cleared the first hurdle with the second-fastest lap of that stanza.

Whincup, his nearest rival in the title race, has maximised the opportunity handed to him thus far by achieving pole number 88 of his career in the #88 Red Bull Holden Racing Team entry.

The seven-time champion set a 1:12.0248s in his ZB Commodore, 0.1535s faster than Penrite Racing’s David Reynolds, who jumped from a provisional seventh to the front row.

Chaz Mostert went from provisional pole to third and is set to line up alongside former Tickford Racing team-mate Cameron Waters, who topped both all-in practice sessions earlier in the day.

Reynolds set a rapid first sector in the #9 ZB Commodore and his 1:12.1783s, with new rears only, was still more than two tenths better than anyone else had managed with only two cars to come.

Whincup was that second-last competitor onto the race track and, having gone deep at Turn 2, almost matched Reynolds to the first split then bettered him in the next two.

Mostert finished off the shootout with a 1:12.3011s in the #25 Mobil 1 Appliances Online ZB Commodore with a similar tyre strategy to Reynolds.

“It’s crazy how it turned around; we had a bit of a lemon in practice,” said Whincup.

“(Engineer David) Cauchi tuned it up for quali, and then another little tweak for the shootout. The car was fantastic and I was lucky enough to get the most out of it.

“Would’ve been good to have the 17 (McLaughlin) in there to see how quick we were against the whole field, but all in all, what goes around comes around and we’re happy with the pole.

“When Davey threw down the 12.1, I thought that was going to be tough to beat, but after Turn 2, into Turn 3, I thought, ‘We’ve got some grip here, we should be on’, and ended up getting the most out of the rest of the lap.

Waters admitted to overdriving his #6 Monster Energy Mustang with an entertaining 1:12.3842s, which split the Erebus Motorsport entries at that point.

A slow first sector was costly for Shane van Gisbergen, who ended up seventh with a 1:12.4971s in the #97 Red Bull HRT ZB Commodore, while Bryce Fullwood (#2 Mobil 1 Middy’s ZB Commodore) is a personal best eighth in his rookie season thus far thanks to a 1:12.6856s.

James Courtney dropped one spot from a provisional eighth with a 1:12.7333s in the #44 Boost Mobile Mustang having missed the apex at Turn 2.

Percat knocked Lee Holdsworth out after the chequered flag in Part 2, consigning the #5 Truck Assist Mustang to 11th on the grid, next to Todd Hazelwood (#14 Black Duck ZB Commodore).

Mark Winterbottom (#18 Irwin Tools ZB Commodore) ended up 13th, three spots up on McLaughlin, who was sent for one run at the back end of the second stanza.

Mostert was among the last to complete Part 1, and bumped Jack Smith (#4 SCT Logistics ZB Commodore) out of the top 20 in doing so.

Three positions behind Smith on the grid will be Jack Le Brocq, who was not able to set a lap time due to his #55 Supercheap Auto Mustang breaking a steering clevis on the Turn 8 kerb.

Race 19 of the Virgin Australia Supercars Championship is scheduled to start at 15:40 local time/AEST, with 39 laps the journey.