Miller not thinking about championship hopes

Miller not thinking about championship hopes 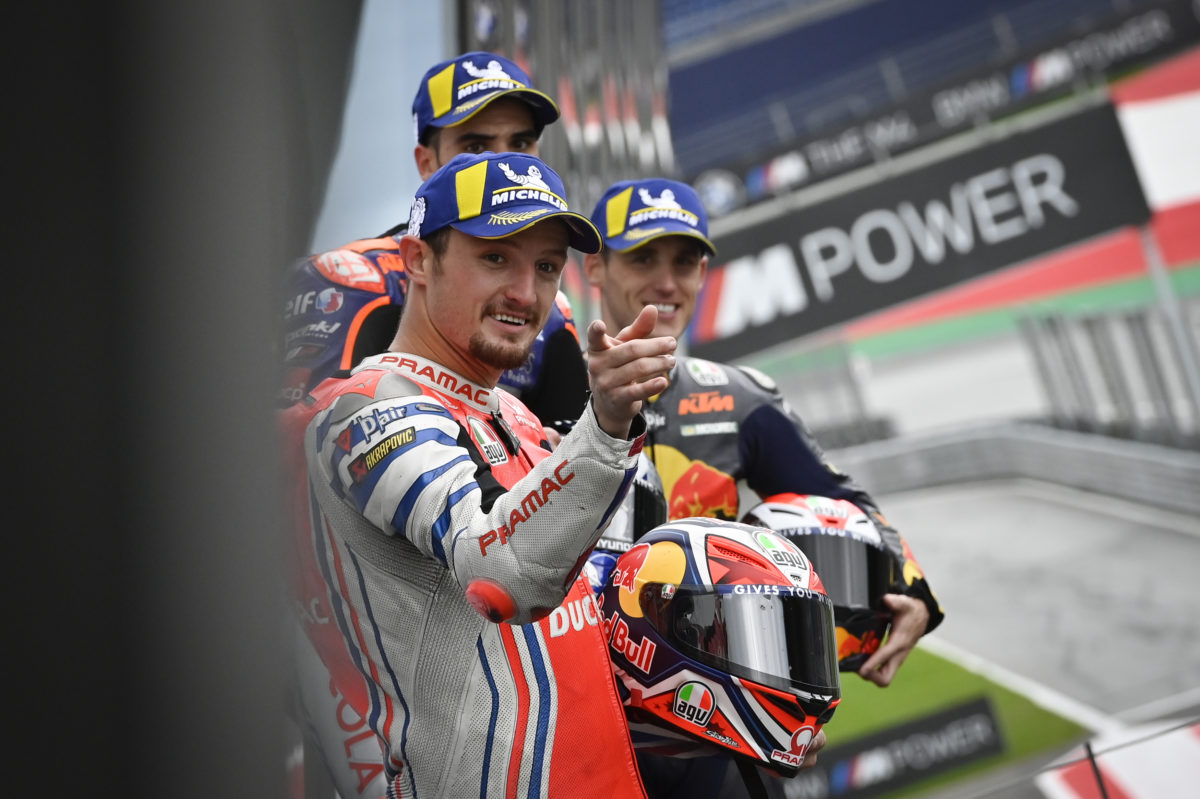 Jack Miller says he is not thinking about his championship hopes despite rising to third in the standings at the Styrian MotoGP.

The Pramac rider now trails championship leader Fabio Quartararo by 14 points, in a top nine covered by 27 points or the equivalent of barely more than one race win (25 points).

Miller finished fourth in the season-opener and declared himself a title contender once Marc Marquez withdrew from the second Jerez round due to a broken arm.

The Australian crashed out of the Andalucian Grand Prix a day after making those comments and was among the Ducati riders to battle as he finished ninth in Round 3 at Brno.

While he rebounded with podiums in both rounds at the Red Bull Ring, namely a third in the Austrian Grand Prix and a second in last weekend’s thriller, Miller is wary of making more bold comments about the title race.

Reflecting on the Styrian Grand Prix in his regular column, he wrote, “I’m now just 14 points off the lead in the world championship now, but last time I said I could be in the fight for it this year with Marc being out I crashed in Jerez, so I’m going to be taking the races as they come and not looking too far ahead. I learned my lesson the hard way!

“Considering I crashed in Jerez and then we struggled in Brno, we’ve been clawing the points back bit by bit.

“Austria has been good for me – finally, I’d done nothing here until the last two weeks – and there’s some great tracks coming up that I enjoy. So let’s just say we’ll see.”

Miller did predict, however, that the back-to-back grands prix coming up next month at Misano should favour the Ducatis.

“Misano is next, with the new asphalt there,” he observed.

“What we know is that with our bike, the GP20, she tends to work really well when the grip is high, so with two races in a row there coming up, we have to make the most of them.”

Although he had finished on the podium seven times before, including victory at Assen in 2016, second at the Red Bull Ring represented Miller’s best dry weather finish in MotoGP.

He did so despite qualifying in “excruciating pain” due to tendon damage sustained in a crash earlier in the day, and was surprised to even be in contention for victory the next afternoon.

“Saturday night, I was up a fair bit of the night icing and using heat on my shoulder and doing rotations and cycles with it, and managed to get a little bit of sleep,” recounted Miller.

“Sunday, I was at a nearby hospital at 7am to have an MRI, literally rushed in and rushed out. I can’t thank them and the doctors, the Clinica Mobile at the circuit, enough. I was sore but compared to where I was before that, I felt pretty great.

“The crash itself wasn’t even that big – I’ve had plenty of bigger ones, believe me – but this one for whatever reason bit me.

“I walked away fine, but as soon as I went back out for FP4, it felt like someone was sticking a knife in my back and I knew there was something really wrong.

“So if you’d told me I’d be fighting for the win in the final corner the next day, I wouldn’t have believed you. Absolutely no way.”

The MotoGP season continues with the San Marino Grand Prix on September 11-13.