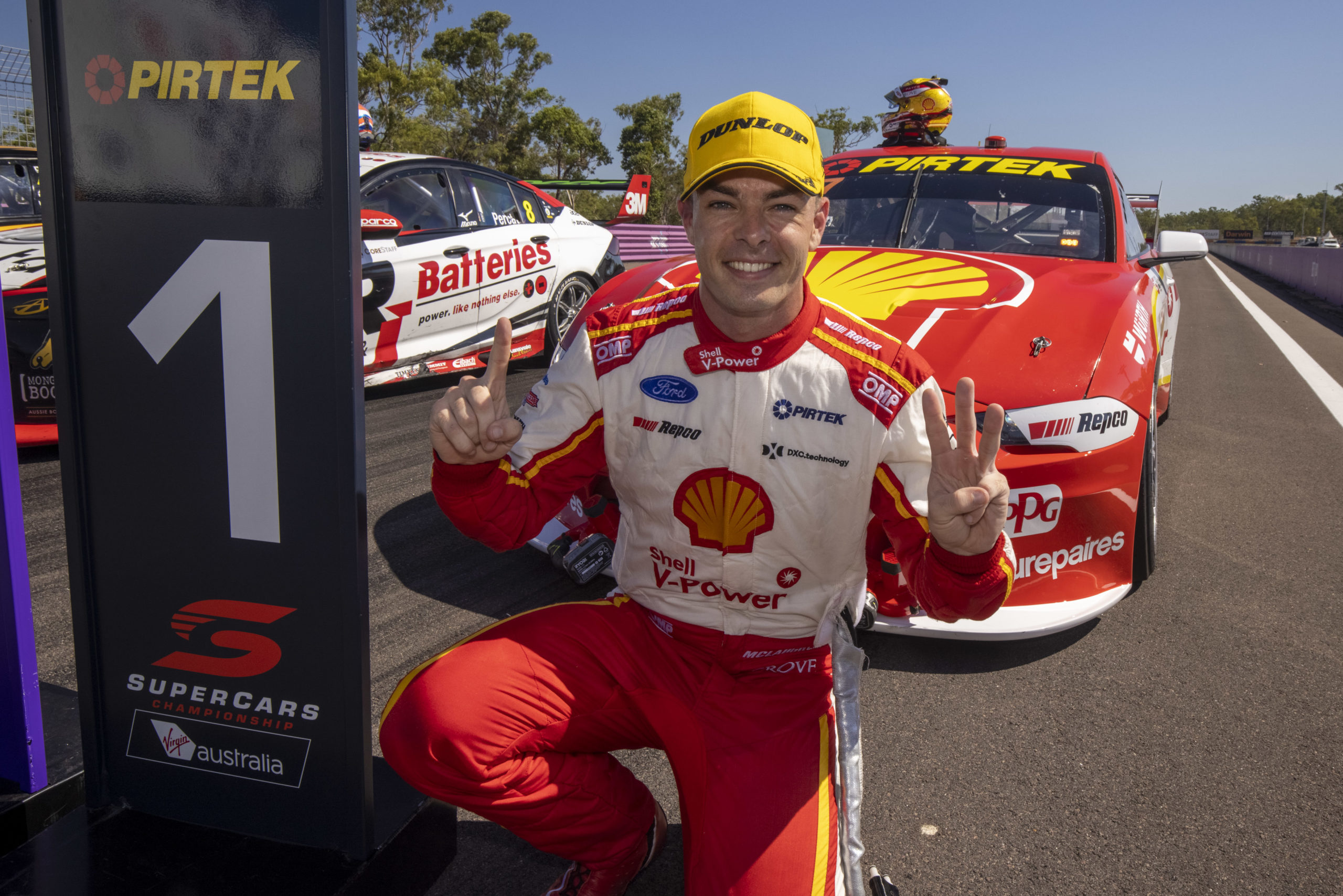 Scott McLaughlin has his eyes set on establishing a “hefty lead” to relieve any championship title pressure going into a possible season-ending Supercheap Auto Bathurst 1000 this year.

McLaughlin currently leads the drivers’ championship on 1324 points after a clean sweep of the three-race weekend in the Darwin SuperSprint at Hidden Valley Raceway.

The Shell V-Power Racing Team driver began the weekend with a 101-point lead that he grew to 177 points over nearest rival Jamie Whincup from the Red Bull Holden Racing Team.

As it stands, the championship still has seven rounds remaining, though that looks likely to be reduced drastically if Supercars’ plans behind the scenes do come to fruition.

Amidst the ongoing coronavirus pandemic, the Penrite Oil Sandown, Pirtek Perth, Tyrepower Tasmania, and provisional season-closer at Sydney Motorsport Park are at risk.

With further calendar revisions expected, the Great Race is shaping up to be the final round of the Virgin Australia Supercars Championship.

Before that, McLaughlin will need to get through back-to-back weekends at the Reid Park Street Circuit in Townsville.

He faces the possibility of another double-header at Queensland Raceway in Ipswich should Supercars get a long-rumoured deal across the line.

That could mean a seven-round run to the final is reduced to five rounds or even three if the Ipswich double doesn’t come together.

With no certainty around when the championship might finish, McLaughlin said he is looking to make hay while the sun is shining and stretch his legs over Whincup to ease any pressure should the season end up finishing at Mount Panorama.

“We’ve got to be smart with how we approach it. We’ve got a good gap at the moment so it’s one race at a time.

“At the moment, for me, the first person to beat is #88, Jamie, and after that, it’s just important that we just maximise our car pace and that’s exactly what we did (in Darwin).

“We’ll just keep racing around and if we can come into Bathurst – which potentially could be the last round – with a pretty hefty lead and we don’t have to do much to bring it home at a race that’s full of variables, that’s ideal.”

After a DNF in the season-opening Adelaide 500, van Gisbergen has climbed back to third in the points, albeit 345 points in arrears.

Despite having eight wins to his name already this season, McLaughlin said he’s conscious that the Holden team may come back strong on the streets of Townsville.

“Jamie is always there,” said McLaughlin.

“They’re both very consistent in their ways. Shane obviously had a couple of issues at the start of this year, especially at Adelaide, which cost him a few points on me.

“Jamie was obviously just that consistency throughout the start of the year.

“They’re (Triple Eight) a team that always bounce back. Townsville, they’re always fast. They’ve got six races there to basically have a big crack. It’s going to be very interesting.”