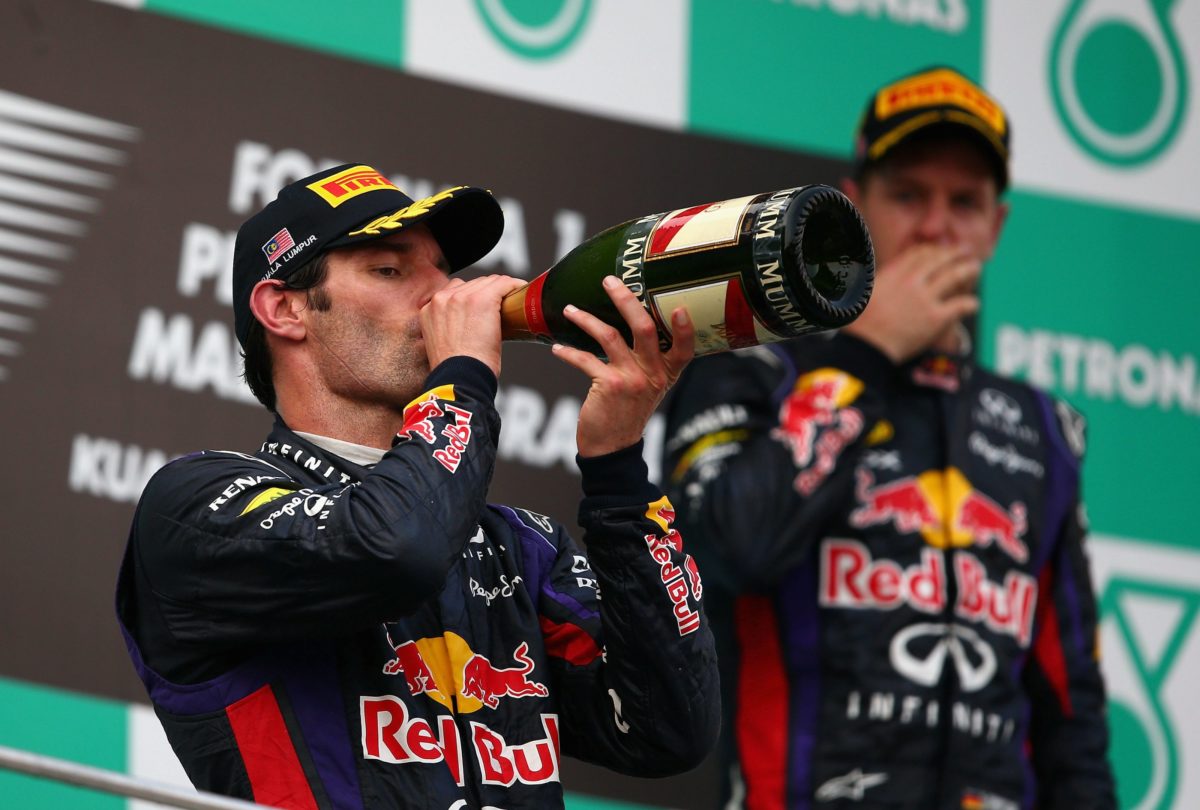 Webber and Vettel on the podium in Malaysia in 2013

Mark Webber has admitted that the Multi-21 incident during the closing stages of the 2013 Malaysian Grand Prix is one of his biggest regrets.

Webber and Sebastian Vettel had a fractious relationship throughout their time together at Red Bull, evidenced by previous on-track clashes.

However things deteriorated further still at Sepang in 2013 when Vettel disobeyed team orders to steal a likely win from Webber.

In the closing stages the two Red Bull’s ran one-two when the team issued the ‘multi-21’ instruction; a code which meant the race was to finish with Car 2 (Webber) ahead of Car 1 (Vettel).

“One of my biggest regrets, I should have turned my engine right back up (when Vettel attacked),” Webber told David Coulthard in a video interview on the sport’s official website.

“But instinctively, I’m like ‘well we should be just closing this race out; we’ve only got three or four or five laps to go and we’re fighting each other and using a lot of material and machinery’, because it was clear for that particular race that we should be shutting the grand prix down.

“Deep down, who knows if Sebastian still to this day regrets that particular grand prix? Maybe he doesn’t, I’m not sure. But look, I wasn’t an angel at certain other events here and there,” he conceded.

At year end, Webber announced his retirement from Formula 1, bringing to an end a career which netted nine race wins and saw him come agonisingly close to championship success.

In 2010 Webber entered the final race of the season in Abu Dhabi with a shot of the world championship crown, embroiled in a four way title fight with Vettel, Fernando Alonso, and Hamilton.

The Australian ultimately ended the season third in the standings, while team-mate Vettel went on to win the first of four successive championships.

“Naturally most people stop and there is something they would like to have had a little more, that’s in our instinct,” Webber said.

“I look at, there’s probably two or three starts that probably cost me a world championship.

“You could say that Korea (where he crashed out early in wet conditions, arguably costing him the 2010 championship) did but there were two or three starts where I’m out of position (and) I had to fight back through in that particular year.

“I could be sitting here as a world champion, but I’m not because I didn’t finish that season with enough points.

“I did take it to the last race against Hamilton, against Alonso, against Vettel, and Sebastian only led the championship for one race that year, which was the last bloody race.

“You’ve got this contradiction of accepting and the clarity of yes it’s been an amazing journey and the people you’ve worked with and trophies and experiences, it’s unbelievable. What I have is special.

“Then you’re like just a bit more, just a little bit more. It’s natural,” he added.

Following his time in F1, Webber joined Porsche in the World Endurance Championship, winning a world title with the marque in 2015.

Meanwhile his place at Red Bull was taken by Daniel Ricciardo, who showed Vettel a clean pair of heels in 2014.