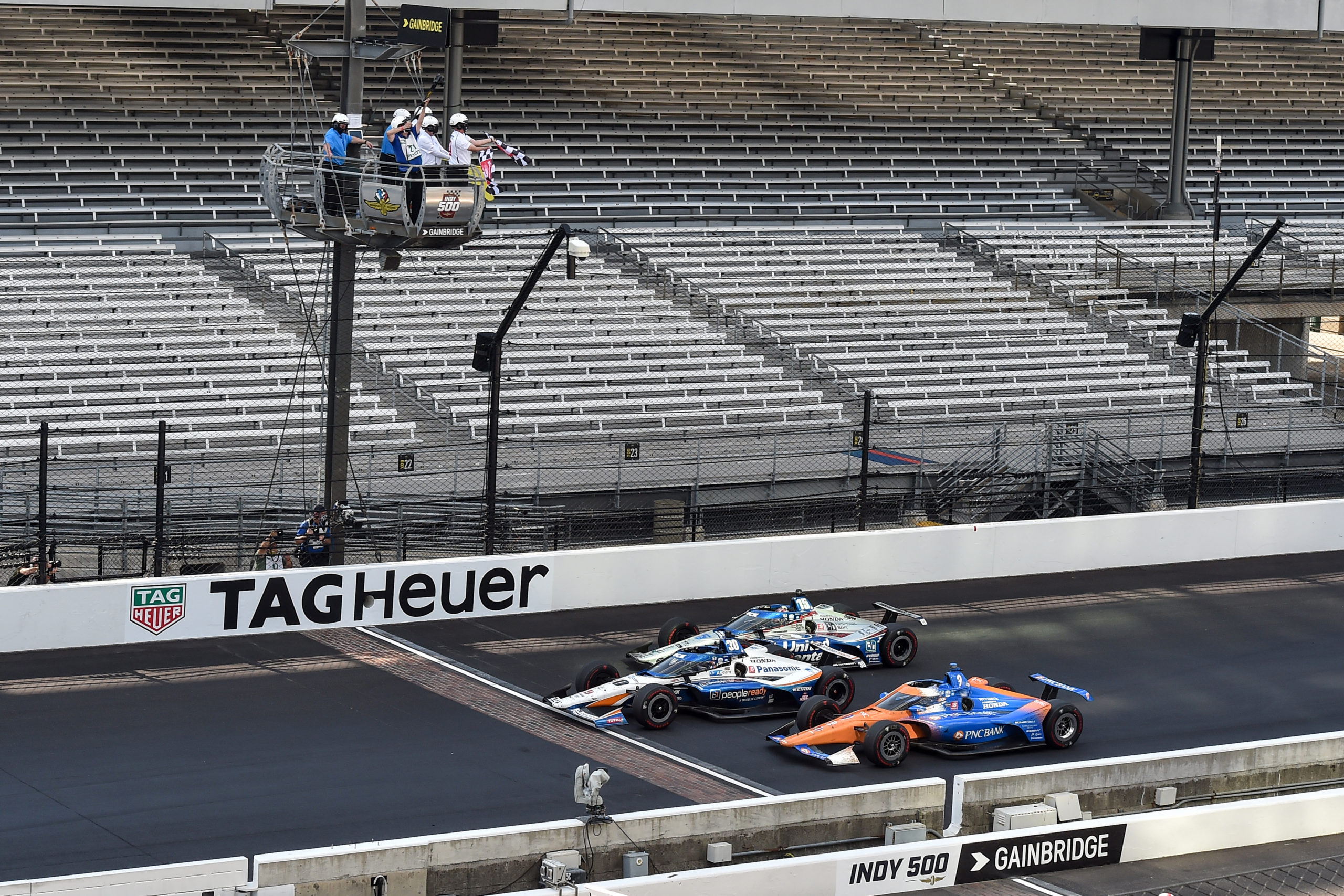 Takuma Sato has defeated Scott Dixon in a dramatic 104th running of the Indianapolis 500, which was punctuated by seven cautions.

A dominant Dixon appeared to have had the measure of the field for much of the day and led 111 of the race’s 200 laps.

However, a gutsy move by Sato midway through the final stint – and a late caution triggered by a scary accident for Spencer Pigot – guaranteed a second Indianapolis 500 victory for the Japanese veteran.

It marked Sato’s first win at the Brickyard since his remarkable 2017 breakthrough, with Dixon an agonising second despite the 2008 winner demonstrating race-winning speed all afternoon.

The race, which was held behind closed doors due to the effects of the COVID-19 pandemic, was full of drama and suspense with accidents, penalties, and strategy playing defining roles in shuffling the pecking order.

In the end, it was a battle between two veterans, with 43-year-old Sato making the most of a tight final call on fuel to outsmart 40-year-old Dixon as the sun began to set on Indianapolis Motor Speedway.

“We knew in terms of the fuel strategy it would be tight, I couldn’t use max power, I had to switch back and forth.

“Worldwide, this is a mega sport, and I’m really proud to be part of the winners (circle) again.”

When the green flag fell to start the race, Dixon and Sato muscled their way past Marco Andretti on the opening lap, with Ryan Hunter-Reay relegating the pole sitter to fourth.

Several runners – including the Penske trio of Simon Pagenaud, Helio Castroneves, and Will Power, as well as Arrow McLaren SP rookie Oliver Askew – opted for an alternate strategy once the opening caution was called on Lap 6 when James Davison’s right front wheel caught fire and brought the Australian’s Rick Ware Racing/Byrd/Belardi car to a halt.

The Lap 13 restart saw an urgency for drivers to get to the front, with James Hinchcliffe dropping Andretti further down the field. When an accident for Marcus Ericsson on Lap 25 brought out a second caution, the bulk of the field took their first stops as Pagenaud assumed the lead ahead of Askew and Power.

Pagenaud and Askew stopped from the top two spots on Lap 45, with Castroneves stopping on Lap 46 and Power a lap later. That vaulted the now fuel-saving Dixon back to the lead ahead of Alexander Rossi, with Dutch rookie VeeKay four seconds back in third.

As the leaders began to hit traffic, Sato cleared Hunter-Reay as the latter battled for balance in his second stint. At the front, Dixon appeared to have Rossi’s measure, before the 2016 winner lost time with an aborted pit entry.

VeeKay then dropped down after a botched pit box entry of his own saw the Dutch teen connect with his pit personnel and earn a stop-and-go penalty.

Off sequence, the Penske trio of Pagenaud, Castroneves, and Power pitted on Lap 76, with the latter jumping Castroneves in the lane.

A third caution, called on Lap 84 for an accident for rookie Dalton Kellett, prompted Dixon to pit under caution as the field tried to keep the Chip Ganassi Racing entry within view.

On the Lap 92 restart, chaos ensued before the leaders hit the line when a spinning Conor Daly saw Askew take evasive action and spear heavily into the inside wall, triggering the fourth caution.

Dixon headed Sato and Rossi as the race went green at the halfway mark, with Rossi clearing the 2017 winner at the first chance of asking on the inside at Turn 1.

Rossi then pounced on Dixon at the same corner, with the Kiwi appearing to give away the lead in order to fuel-save before regaining the lead two laps later. Behind them, Patricio O’Ward moved into third at Sato’s expense, with Ferrucci ahead of Andretti and Newgarden.

The chess match between Dixon and Rossi ebbed and flowed as the series leader pushed the American into a tense fuel race. Lap after lap, the top two swapped the lead as O’Ward kept a watching brief in third, neither Dixon nor Rossi willing to make a break with the chasing pack remaining within reach.

The tension amplified once the fifth caution was called on Lap 122 following a crash for Alex Palou at Turn 1, with the majority of the field stopping under yellow.

Dixon emerged on pit road in the lead, but the same couldn’t be said for Rossi and Sato as they made right-rear to left-front contact rejoining the queue.

Rossi was slapped with a penalty for an unsafe release and was forced to the rear of the field ahead of the restart. Replays showed Rossi’s pit stop was delayed due to an issue with the right rear wheel nut.

Dixon was fourth in the queue and second on the road behind Felix Rosenqvist as the race restarted on Lap 132, with the Swede handing his Chip Ganassi Racing team-mate the lead back.

Pagenaud, meanwhile, was forced into the pits for a nose change after Hunter-Reay closed the door on the defending race winner at Turn 2 and made contact.

Rosenqvist stopped on Lap 139 to release Rahal, who had worked his way into the top three. His Andretti Autosport team-mate Rossi continued his determined fightback, but on Lap 144, he triggered the race’s sixth caution when he lost control and crashed at Turn 2.

Dixon cleared out on the Lap 155 restart as Sato and Newgarden pounced on Rahal. Dixon again began to play the fuel mileage game, this time with Sato as the lead changed hands.

Drivers were being urged to save fuel towards the final round of stops, with Sato and Newgarden the first of the leading group to pull into the lane at the end of Lap 169.

Dixon and Rahal were brought in one lap later, and despite a slow stop, Dixon emerged in a clear lead as Sato and Newgarden cleared Rahal.

From there, fuel mileage was no longer a point of concern, but that didn’t stop Sato from snatching the lead from Dixon.

A defiant Sato put up a spirited defence as Dixon closed on the pit straight, lap after lap. All the while, Rahal – who had cleared Newgarden, who in turn had been demoted to fifth by Ferrucci – closed on the leaders.

Sato’s lead stretched out to a second, but traffic ahead brought Dixon, Rahal and Ferrucci back into the equation.

However, the result was settled once Spencer Pigot crashed with five laps to go, the race finishing under yellow as Sato completed a remarkable performance to beat a dejected Dixon.

“It’s definitely a hard one to swallow, that’s for sure,” Dixon told the broadcast.

“We had such a great day. I don’t know with fuel mileage there, I really can’t see how they were gonna make it.

“We pitted a lap later, and the numbers we had to get, it was going to be extremely difficult.

“I thought they were going to throw a red flag, which would’ve been interesting for the last four or five laps.

“But huge congrats to Sato, he drove his pants off today.”

Second place at the Indianapolis 500 puts Dixon 84 points clear of nearest rival Newgarden with at least five rounds to go.

The NTT IndyCar Series continues on August 29-30 with a double-header at Gateway.