Miller: Oliveira caught me by surprise at final corner

Miller: Oliveira caught me by surprise at final corner 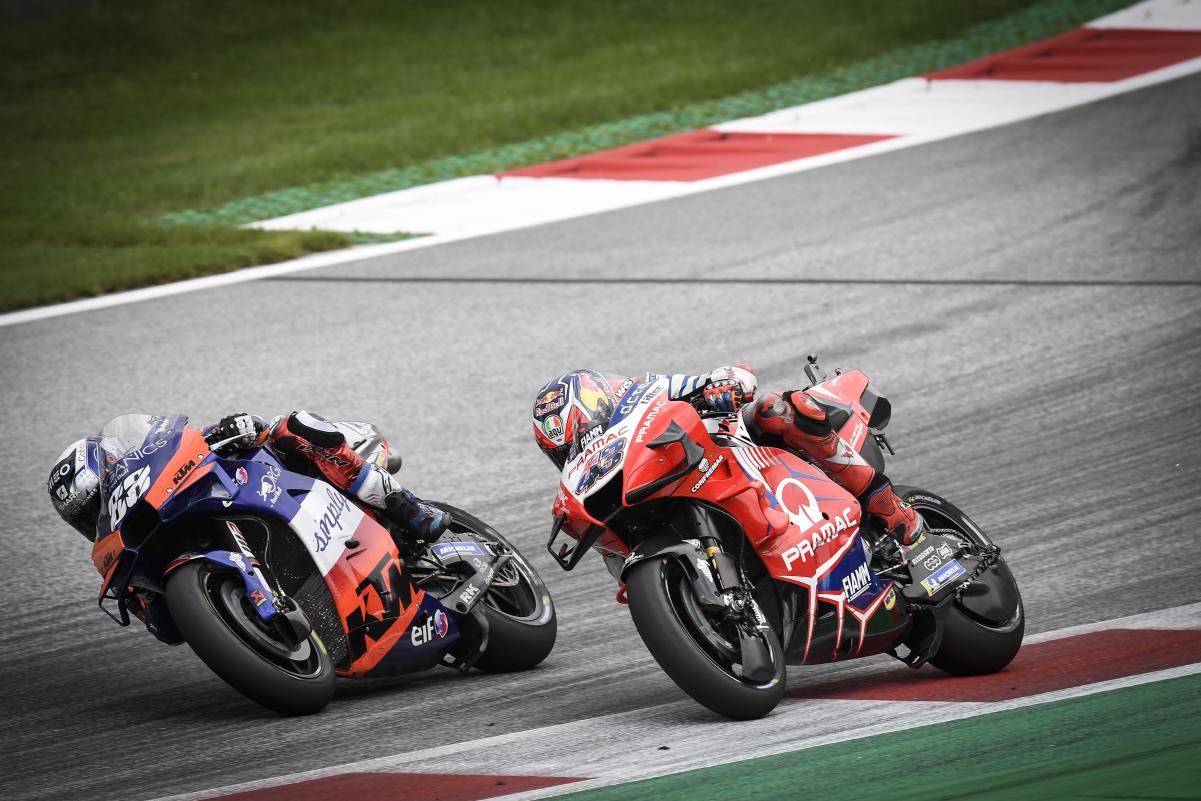 Jack Miller says that Miguel Oliveira caught him by surprise in snatching victory in the Styrian MotoGP having entered the last corner in third spot.

The Portuguese was the beneficiary when Miller dived down the inside of Pol Espargaro at Turn 10 on the final lap around the Red Bull Ring, powering past both the Pramac Ducati and his factory KTM counterpart on exit.

Miller ended up second having started the lap in the same position, but at that time behind Espargaro, who completed the podium.

There were already two lead changes during the final tour of the Austrian circuit, namely at Turn 4 and into Turn 9, before the three-way stoush at Turn 10.

The final passes settled matters in favour of Oliveira, meaning a first MotoGP race win for both the 25-year-old and his Tech3 team.

“He caught me by surprise, that’s for certain,” said Miller of the satellite KTM rider.

“I thought the battle was between Pol and myself, so I fired one at him.

“I really want to see the timesheets because I’ve been fast through Sector 1 all weekend but it was the first time I got limiter in sixth gear going up there; we came in there (Turn 3) rather hot.

“Pol went a little long and we come out together, and I thought ‘It’s now or never; I have to try and get in front and block.’

“I did so but I didn’t get the greatest run out of (Turn) 7 and the KTMs seemed to be tracking really well out of 7 into 8, and I could hear him straight away; he was right next to me.

“Being used to Moto3 and stuff like that, when people pass you on the last corner like that, there’s normally about six of them and I was waiting for another three to come through and I’d be off the box.

“(But I’m) stoked for him, him and the Tech3 team; they’ve been here for ages. I was talking to Herve (Poncharal, team founder/owner) before; it’s great for them to get a win.”

Espargaro had a similar view.

“As Jack said, this was like a last lap of Moto3. Also, I was pushing the front, my rhythm was nice, but the last lap was very slow because we were fighting.

“I thought also it was just Jack and I fighting for the victory.

“When I arrived at Turn 9, I thought that was my last chance to win the race. It was pretty good, the line, everything was nice, I opened the throttle but, fighting against the Ducati, you expect he will try again.

“In the last corner, for sure Jack tries as I would try and everyone would try, and we both went wide and then Miguel took the opportunity to win the race.

“In the end, this is racing, we enjoyed a good race, we could win the race for sure, we were first ‘til the last corner and these kind of things happen, but just I’m happy for the performance of the bike during the whole weekend, (including) starting from the pole position.”

Oliveira described himself as proud before adding, “There are, for sure, many reasons to be happy about this day.

“It was a win in the home of KTM and Red Bull, so this is extra special; first one for me and I think we, throughout the whole weekend, made a good job.

“I was lucky to have a second chance in the race (due to a red flag) because I could change the front tyre and I think this allowed me to be much more competitive in the second race.

“(I’m) Just really happy. My feet are on the ground but my head, it’s for sure floating around a little bit, filled of happiness for not only me but my family, Portuguese fans, everyone.”

Miller is now third in the championship, 14 points behind leader Fabio Quartararo, with Oliveira ninth and Espargaro 10th.

The San Marino MotoGP is next on September 11-13.