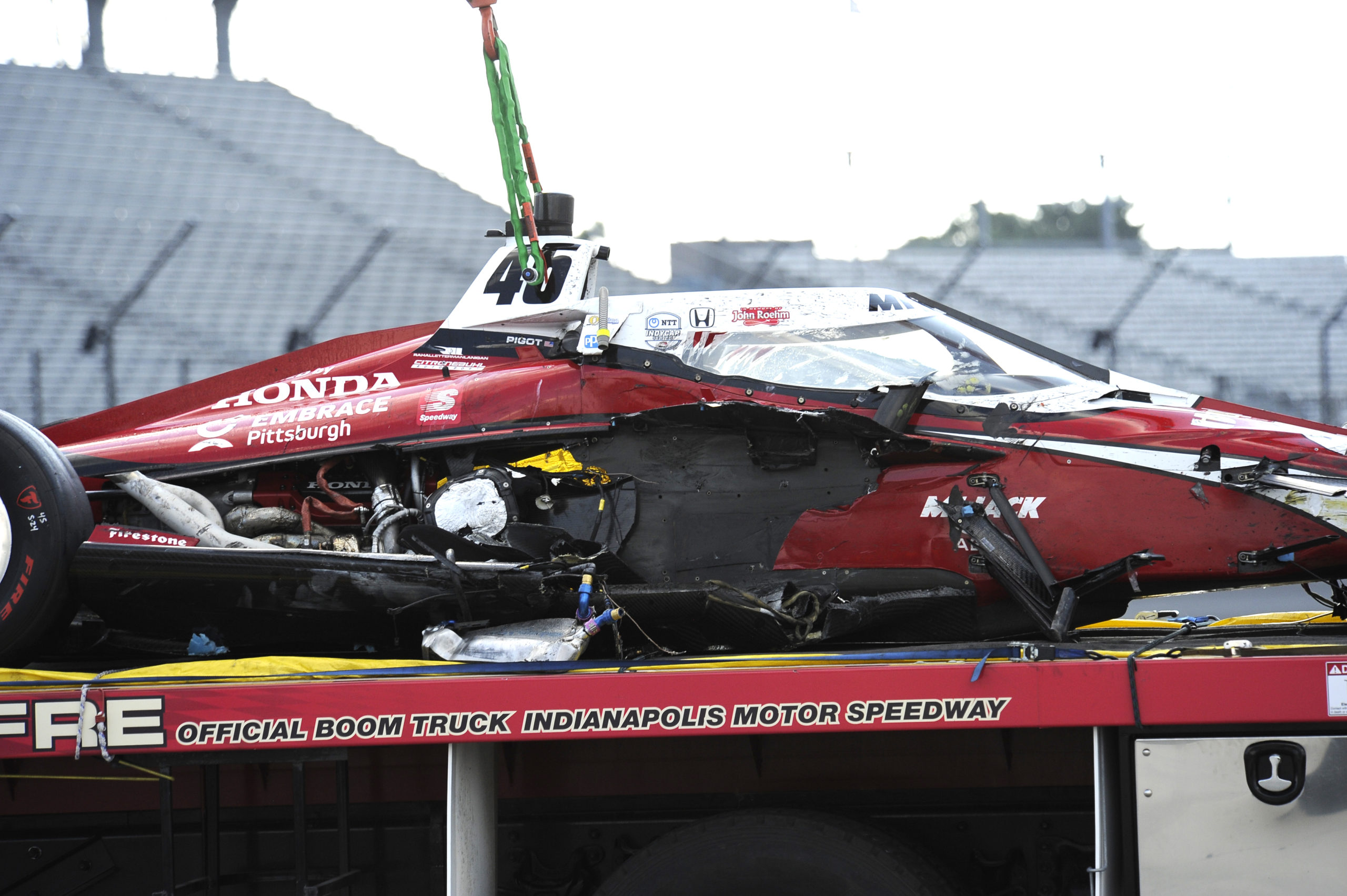 The wreckage of Spencer Pigot’s car

IndyCar Series organisers have defended their decision not to red-flag the 104th running of the Indianapolis 500 following a late accident for Spencer Pigot.

Following a heated battle for the lead, Takuma Sato crossed the line ahead of Scott Dixon and Graham Rahal under yellow to claim a second Indianapolis 500 victory.

With five laps remaining, Pigot spun exiting Turn 4, hitting the outside wall before spinning down to the inside of the track towards the pit entry.

Pigot’s car slid at pace towards the barrier protecting pit road from the front straight and was vaulted off the pit attenuator across the track.

The 26-year-old was able to climb out of his car, but was laid down and attended to by trackside workers.

Pigot was later placed on a stretcher and was transported to a local hospital for further evaluation. All the while, the race continued, albeit under control of the Safety Car.

With a driver being attended to trackside and extensive damage to the pit attenuator, the race ultimately continued to the chequered flag, ending Sato’s challengers’ chances of snatching victory.

After the race, IndyCar stated that time was the defining factor in the race ending under yellow.

“IndyCar makes every effort to end races under green, but in this case following the assessment of the incident, there were too few laps remaining to gather the field behind the pace car, issue a red flag and then restart,” read a statement.

Dixon – who finished second despite leading 111 of the race’s 200 laps – admitted his surprise in the stewards’ decision not to halt the race.

“I definitely thought with five to go, I thought they were going to (red flag the race) immediately because, one; the size of the crash, and two; where it was,” Dixon said.

“It wasn’t going to be a quick cleanup. I was kind of surprised they didn’t. They said, normally we don’t do that. History would tell you that’s not true either.

“For us, it would have been really good because I think the leader would have been a sitting duck. That’s kind of harsh on Sato. If they got out there and had a dash with three laps to go, I think all is fair in a situation like that.

Instead of following the pace car to the chequered flag, Dixon believed a three-lap dash after a red-flag restart would have been a “fair” outcome, with many fans taking to social media to vent their dismay in the race’s anti-climax of sorts.

“I think if they had thrown a red, the restart, the car in second in a scenario like that where you’re not trying to save fuel, going flat out, the leader would have been a bit of a sitting duck unless he did something very weird or strange that caused a bit of a chain reaction or an accordion effect,” Dixon explained.

“If there was a three-lap shootout, that would have been pretty fair.

“I don’t know how or why or how they do it in the past. Last few times it was maybe more laps to go in the race. I think if they called it pretty quickly like they typically do, you still could have had at least three laps to fight it out.”