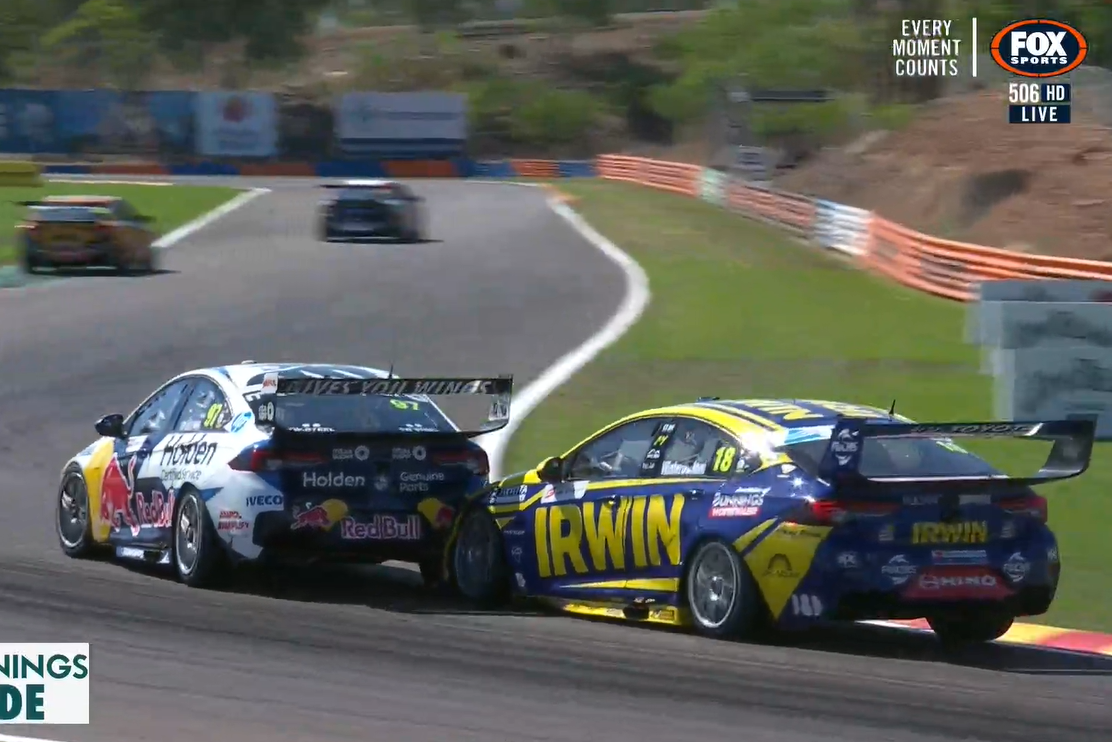 Mark Winterbottom will keep fourth spot in Race 18 at the CoreStaff Darwin SuperSprint despite an investigation into contact he made in taking that position from Shane van Gisbergen.

The Team 18 driver had been pressuring van Gisbergen for several laps in the latter stages of the weekend finale at Hidden Valley Raceway before getting the move done on Lap 35 of 38.

However, he did so with front-to-rear contact as they rounded the right-hander on their way into ‘the valley’, finally completing the move on exit from the hairpin.

Winterbottom stated shortly after the race that he was unsure if there had been a touch, but believed that the Red Bull Holden Racing Team had requested an investigation, which the stewards summary confirms.

The stewards ultimately did not find that a breach of rules had occurred.

“During the Race the RD conducted an investigation at the request of Triple Eight Race Engineering into an Incident at Turn 4 on Lap 35 when Car #18, Mark Winterbottom, overtook Car #97, Shane van Gisbergen, and contact occurred between the two Cars,” reads the final stewards summary of the event.

“After reviewing broadcast footage of the Incident and consulting the DSA, the RD determined that there was no evidence of a breach of the Rules by the Driver of Car #18.”

Said Winterbottom in his post-race television interview, “We went long to try and buy ourselves a bit more freedom in pit lane then and came out just behind ‘Giz’, who… I don’t know if you call it a B-double or what the wide version of that is.

“He moved a few times under brakes so that’s my opportunity to have a crack, and he slid wide.

“I don’t think I contacted him, did I? I think he slid wide but they’ve put in a protest like they do and we’ll see how we go.”

The stewards summary does confirm that Anton De Pasquale has been penalised by way of an extra five seconds on his race time for his run-in with Andre Heimgartner at Turn 1, late in the day’s earlier 38-lapper.

As such, the Penrite Racing driver drops from 10th to 12th, behind Heimgartner himself and the other Kelly Racing entry of Rick Kelly (Castrol Racing).

“Following the Race the RD conducted an investigation at the request of Kelly Racing into an alleged Incident at Turn 1 on Lap 31 when Car #99, Anton de Pasquale, made contact with the rear of Car #7, Andre Heimgartner, as a result of which Car #99 gained a position,” stewards reported.

“After an admission to the breach, the Stewards imposed a 5 second post-Race Time Penalty on Car #99 for a breach of Article 2.1.1 of Schedule B2 (Careless Driving).”

The former’s was the most prominent, given it occurred when he was engaged in a vigorous battle with Nick Percat over seventh position, the end result of which was that the R&J Batteries-backed Brad Jones Racing entry spun off into the weeds at Turn 1 on Lap 34.

In Race 18, Fabian Coulthard dropped from 10th at the chequered flag to 11th all told due to a five-second penalty for Careless Driving which was determined shortly after he gave Bryce Fullwood a nudge at Turn 14 on Lap 15.