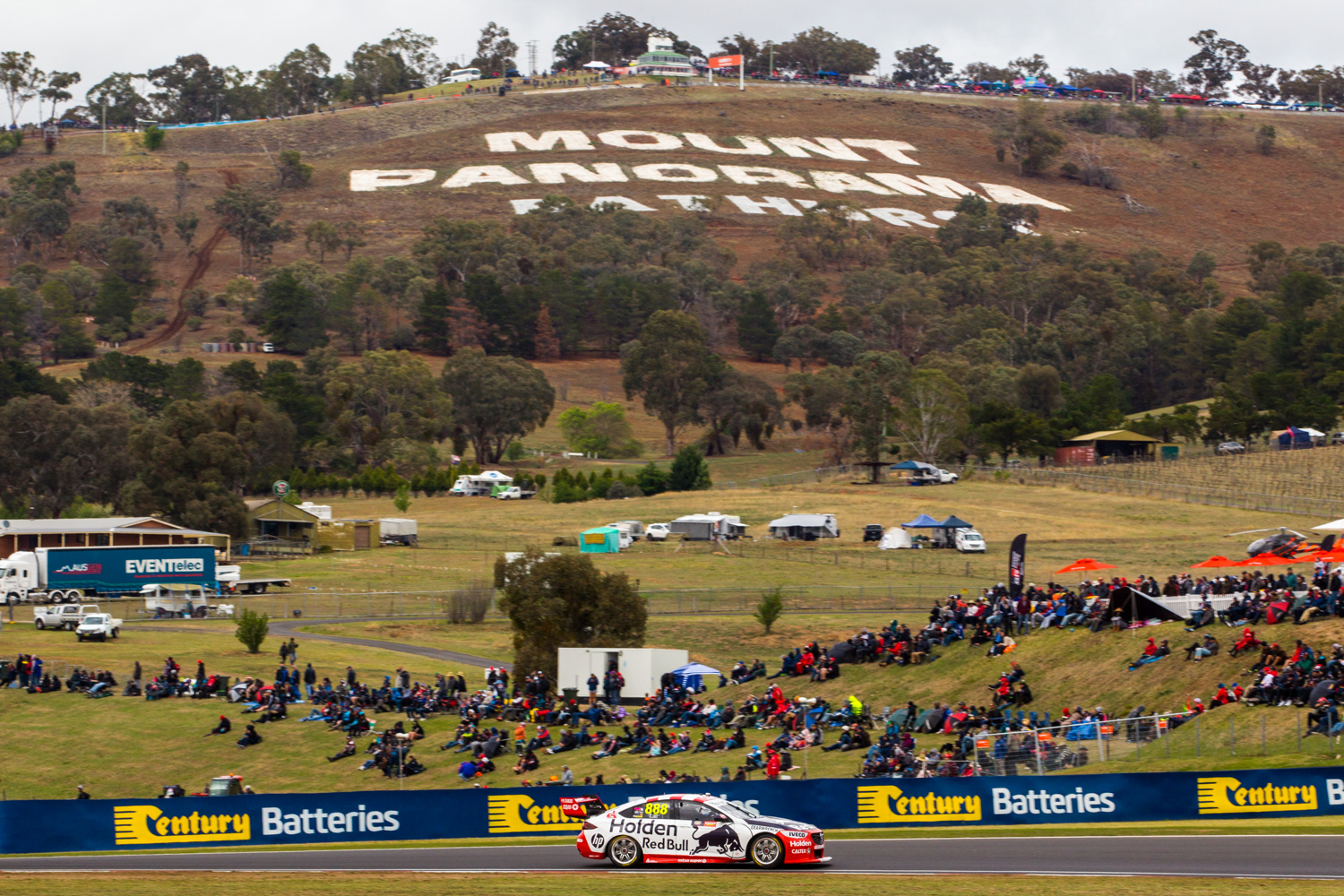 Mount Panorama could host the Supercars finale in 2020

Jamie Whincup says Supercars will target a Supercheap Auto Bathurst 1000 season finale if it is “as easy as possible” for on-the-road Victorian teams.

The Red Bull Holden Racing Team driver said the prospect of the season ending at Mount Panorama wouldn’t be an issue for Queensland-based teams.

As reported by Speedcafe.com, Supercars is looking at pushing this year’s Bathurst 1000 back a week to allow more preparation time for teams.

Speaking during Saturday’s post-race press conference, Whincup, who is also on the Supercars Commission, said a Bathurst 1000 finale is looking likely.

“It would be okay for the Queensland teams because we’ll go back home, we’ll be home for another week or so, and then we’ll head down,” said Whincup.

“We’re still not sure whether we’ll need to quarantine when we come back to (Queensland) or not.

“We may need to do two weeks’ quarantine but most likely, and my guess is as good as anyone’s, that it could be the end of the championship, at Bathurst.

“So we’ll quarantine for two weeks and then have five months off.

“For the Queensland-based teams, it’s not a big issue. For the Victorian teams, they’re going to be away for a little bit longer.

“If we can make it as easy as possible for them, that’s the direction we’ll head in.”

Prior to this year’s Bathurst 1000, teams will have to get through a double-header in Townsville at the Reid Park Street Circuit. Beyond that, more calendar revisions could be made.

It has long been rumoured a double-header at Queensland Raceway is on the cards, and on the speculated dates, that would only allow a week in between to prepare for the Great Race.

Speedcafe.com understands decisions have been made in principle by the Supercars Commission for a Queensland Raceway double-header and the Bathurst 1000 date change.

However, ratification of those decisions ultimately lies with the respective state governments and councils.

Among the numerous calendar revisions that have been made so far this year, the pre-Bathurst 1000 endurance hit out was among the cancellations.

That was set to take place at The Bend Motorsport Park. Now, co-drivers are set to go into this year’s 1000km enduro with little to no on-track preparation.

Posed with a question about adding a 500km race at Queensland Raceway into the mix including co-drivers, Whincup said the sport is already in a high cost phase.

“You’ve got no idea how crazy it is. Trucks have literally been up here for three weeks and then we go straight to Townsville.

“We’re going through componentry like you wouldn’t believe, we’re just trying to fix things and get cars together to get to the next race.

“We’d love to have a 500km or another enduro somewhere but realistically, the workload on the teams is massive.

“They’re doing an unbelievable job and it’s going to be so tough to get through what’s proposed until Bathurst. I can’t see it being possible to do a 500km race before the Great Race.”

Already there have been calls to add more track time to this year’s Bathurst 1000 schedule to allow co-drivers to get up to speed.

Scott McLaughlin’s co-driver Tim Slade will not have driven a race car competitively since the beginning of this year in the Asian Le Mans Series.

“From my point of view, Tim hasn’t really driven our car too much apart from the test day so the more laps, the better,” said the Shell V-Power Racing Team driver.

“If Jamie hadn’t answered that way, I’d have said ‘that would be awesome, I want to race more’ so drivers who don’t understand the budgets and all that sort of stuff want to race as much as they can but on the other side, you’ve got componentry and other stuff so we’ve got to be right on top of it.”

“It’s really important (to get laps),” he said.

“You’ve got to get the co-drivers laps, you don’t want to go to Bathurst and have co-drivers that haven’t really driven the cars at all.

“There is a safety thing as well, going around there you ask a lot of your co-drivers at the best of times so you want to make sure they’re comfortable in the cars.

“It would be good if Supercars could put on a few co-driver sessions for them instead of a 500k race.

“What Jamie said about the wear and tear, it’s hard enough for us – especially the Victorian teams – getting parts up here so doing a 500km race would be a killer for us.

“Maybe a couple of co-driver sessions would be enough.”