Pye a lap off ‘having a fair crack’ at van Gisbergen

Pye a lap off ‘having a fair crack’ at van Gisbergen 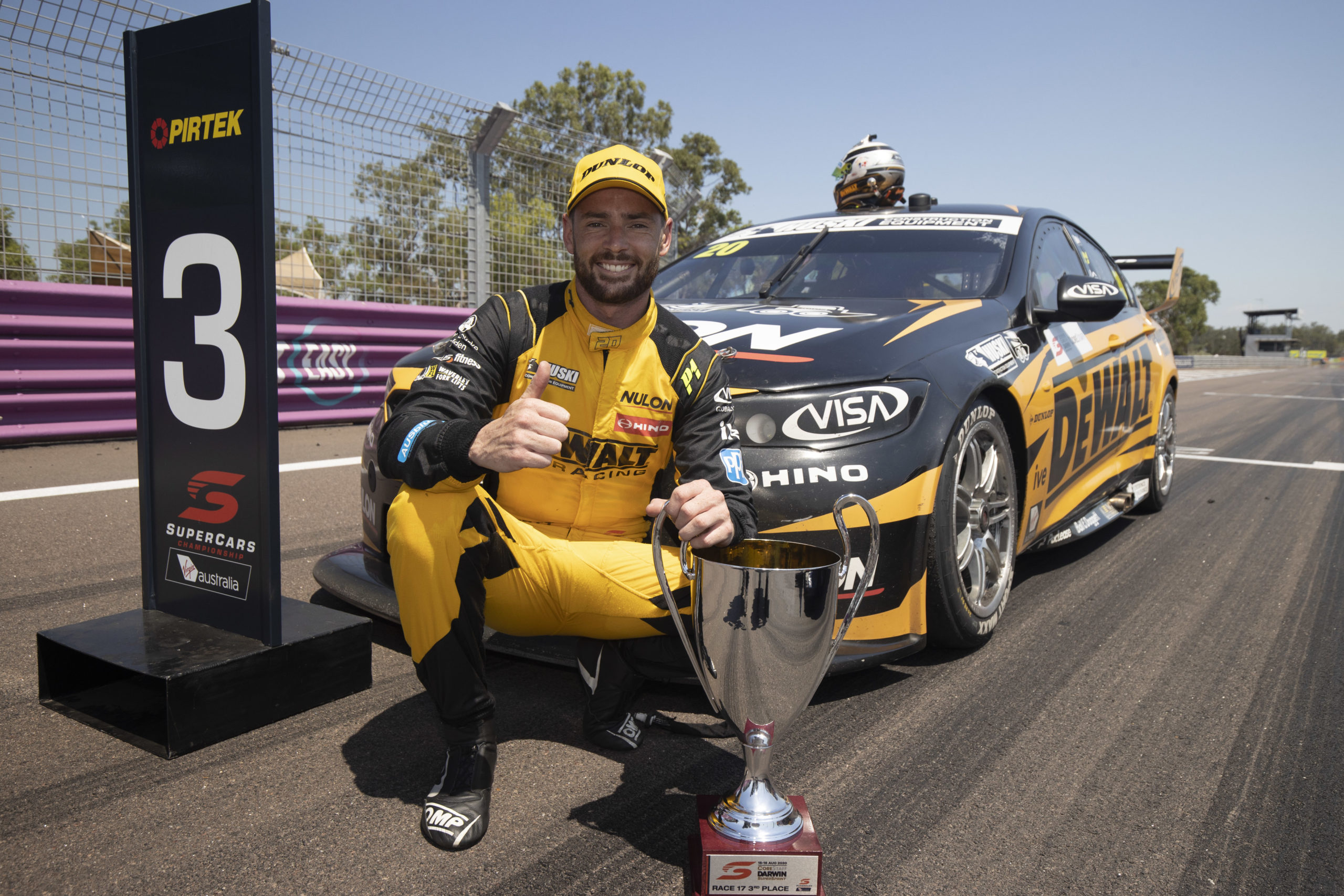 If not for a mistake before his pit stop, Scott Pye says he could have had “a fair crack” at Shane van Gisbergen for second place in Race 17.

After an extended dry spell, Pye has scored podiums on back-to-back weekends for Team 18 at Hidden Valley Raceway.

The Irwin Racing driver began the race from third and fell to fourth initially after Shell V-Power Racing Team driver Fabian Coulthard made a strong start to move to third.

Pye held station in fourth but found his way to the lead while those around him pitted.

The 30-year-old ran long on his first set of tyres. Only a lap before his pit stop, he made a mistake at Turn 7 and ran wide onto the grass.

Come Lap 27, Pye pitted for a sprint to the finish and returned behind Coulthard who he quickly dispatched.

Pye soon began to hunt down van Gisbergen who chose to take rear tyres only versus Pye who put right-side tyres on.

“I just had a good time and it was like a time trial from start to finish there for us, it was go as fast as we could in the first stint, put the tyres on, and go as hard as possible in the last,” said Pye.

“I was hanging to get Shane, I was probably a lap off having a fair crack at him but I did push him into missing a few apexes so he might be able to throw some highlights on his Apex Hunters page after that.

“It was good fun racing a good mate. (It) didn’t quite come through for second but absolutely stoked for DeWalt Racing to get another podium.

“I feel like we could have got second if I didn’t make that mistake,” Pye added.

“There’s never a perfect day at the office, there’s always things to work on and for me, Turn 7, I think I got in on the white line maybe might not have even been the marbles and last two-and-a-half seconds on my in-lap.

“I was frustrated with myself on that one and then my pit entry was even a bit rubbish. I need to work on that but that in-lap, it was just a matter of trying to get everything out of the car I possibly could and leave nothing out there and it bit me.

“Maybe that would have been the difference in getting Shane but I’m sure he wouldn’t have made it easy for me.”

Pye will start Race 18 at the CoreStaff Darwin SuperSprint from eighth, down from his third place start in Race 17.

While the South Australian will start towards the back end of the top 10, he said the alternative strategy to run long has worked well once his car is in cleaner air.

“I think we need to keep them guessing,” Pye said of strategy calls.

“If we go early, I think that’ll work for us as well. Where we are in the pit lane, it’s risky going early because if everyone comes in, they’re going to have to come past us before I can exit the box.

“The good thing is that when you have a quick car, you can almost make any strategy work for you. I’m qualified eighth and that’s the biggest difficulty. I threw a bunch of time in the hairpin, another driver error, I seem to be talking about a few.

“There’s little things today I haven’t been happy with and putting the car in eighth, I was disappointed with that. If we can get some clean air, we’ll be okay and we’ll come back through.”