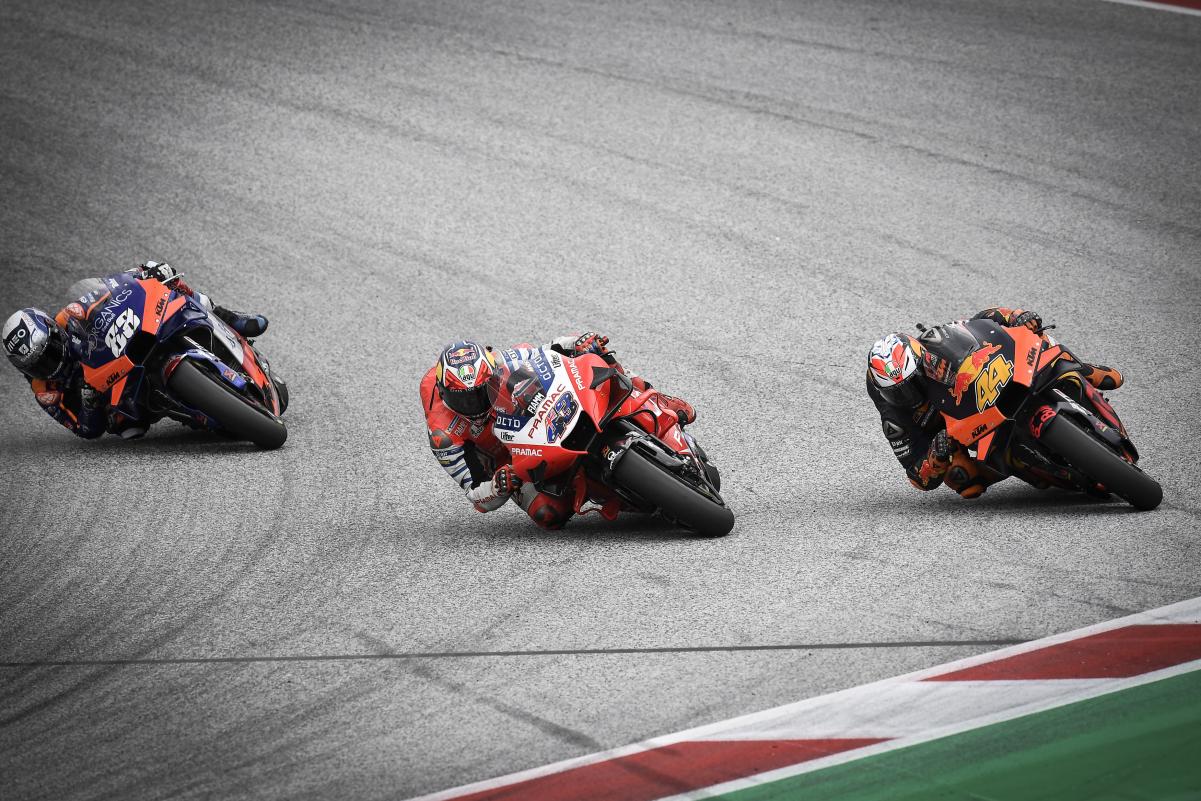 Miguel Oliveira has swooped on Jack Miller and Pol Espargaro at the final corner to pinch his and Tech3’s first MotoGP win at the Styrian Grand Prix.

Miller led around half of the 12-lap second stanza of yet another red flag-affected race and it looked like he would fight it out with Espargaro for victory on the final lap around the Red Bull Ring.

That was indeed the case but Oliveira stuck with them and when Miller made a dive at Turn 10 and took the factory #44 KTM wide, the #88 Tech3 KTM had the drive to pass both on the short run to the chequered flag.

Miller finished second on his Pramac Ducati and Espargaro third, the latter having gone a long way onto the green painted run-off area in the last right-hander. 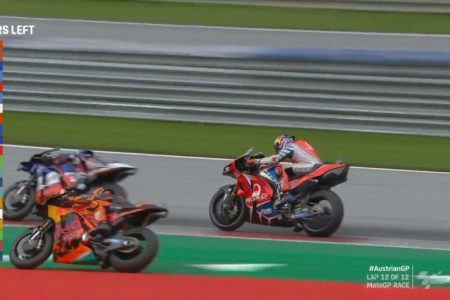 Unofficially, there were arguably four lead changes on the final lap, the first caused when Espargaro went defensive at Turn 3 and Miller used the momentum to pass at Turn 4, the second when the Spaniard came back at the Australian into Turn 9, and the third and fourth through and out of the only corner which remained thereafter.

Suzuki Ecstar’s Joan Mir finished fourth having been hard done by the red flag which not only wiped out his approximately 2.5s lead with a dozen laps to go, but also gave others a chance to fit new tyres when he could not.

The stoppage was caused by a scary moment for Maverick Viñales, who jumped from his bike at over 200km/h due to a continuation of the Yamahas’ brake problems, and the errant M1 popped an air fence.

Back at the initial race start, it was Espargaro who made a reasonable launch from pole but Mir, who started third, taking the lead into the first corner.

Miller emerged third with a strong exit from Turn 1 and chased Espargaro up the hill before outbraking the Red Bull KTM Factory rider down into Turn 4.

Takaaki Nakagami (Idemitsu LCR Honda) took the opportunity there to seize third, appearing to make contact with Espargaro through Turn 5 in doing so.

Just ahead, Miller inherited the lead given Mir was ordered to drop a position due to running well wide off Turn 1.

Andrea Dovizioso (Ducati Team) started eighth and took over sixth in passing Viñales (Monster Energy Yamaha) at the top of the hill on Lap 2, before Nakagami put the same move on Mir on Lap 4.

Mir reclaimed second position a corner later then overtook Miller at Turn 10, and stretched the margin to half a second in the next three laps.

In the meantime, Rins briefly held fourth due to an Espargaro error and while the pole-sitter power back ahead, they were losing touch with Nakagami.

The gap from third to fourth grew beyond two seconds for the first time on Lap 11, as Rins continued to tail Espargaro, while Mir’s lead over Miller was over one second on Lap 13.

Brad Binder (Red Bull KTM Factory Racing) had been on a charge and sliced past Dovizioso for sixth at Turn 3 on Lap 13, moments before Viñales slowed and raised a hand in what may have been a sign of things to come.

Nakagami got under Miller at Turn 10 on Lap 15 only for the Australian to use Ducati power to blaze back past #30 before they got to the Turn 2 kink on Lap 16, but the LCR rider made the move stick at Turn 6. 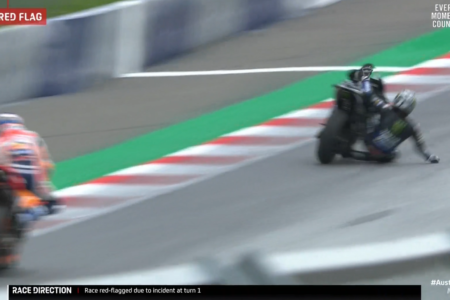 Mir was 2.360s up by then and creeping away but a red flag came on Lap 17 when Viñales, who had pressed on and was 13th, bailed out at Turn 1 in response to losing his brakes.

Although the #12 Yamaha momentarily caught fire in the air fence, the Spaniard was thankfully able to walk away.

Championship leader Fabio Quartararo (Petronas SRT Yamaha) took up 10th having also appeared to be struggling with brakes, as was the case at the same circuit a week earlier.

Not only had Mir lost his tidy lead over Nakagami with the red flag, he also changed only his rear tyre to a new Michelin medium slick while Miller was able to have new softs fitted at both ends of his Ducati.

The Australian’s restart was not great and Mir took a clear lead to Turn 1 for the 12 laps which remained, but Miller was still able to accelerate up the hill in second spot.

He went down the inside of #36 at Turn 4 and just kept the lead on exit, as Nakagami got held wide of multiple KTMs and was shuffled back to seventh.

Binder passed Oliveira for fourth at Turn 4 on the second lap of ‘Race 2’ but could not make it stick and soon lost fifth to Dovizioso.

Pol Espargaro had taken up third position before passing Mir at Turn 3 on Lap 5, then made an unsuccessful attempt to overtake Miller at the start of Lap 6.

Oliveira went by Mir at the top of the hill on Lap 6, and when Espargaro did complete the pass on Miller at Turn 9 on Lap 7, the top four closed up.

Mir ran wide at Turn 4 on Lap 8 and last start winner Dovizioso accepted fourth position, but they were losing touch with the three ahead.

Miller continued to go with Espargaro and Oliveira was not far behind, setting up the hair-raising conclusion.

Also on the final lap, Mir reclaimed fourth when Dovizioso ran wide at Turn 3, and the factory Ducati rider would ultimately split the Suzukis given Rins finished sixth.

Quartararo ended up 13th and Johann Zarco (Esponsorama Ducati) was 14th from a pit lane start in ‘Race 1’.

The former continues to hold the championship lead but Dovizioso is now only three points behind and Miller has moved up to third, 14 points adrift of top spot.

Fourth to seventh in the standings is Binder, Viñales, Nakagami, and Rossi, all no more than a race behind Quartararo.

MotoGP has the next two weekends off before back-to-back rounds at Misano from September 11.