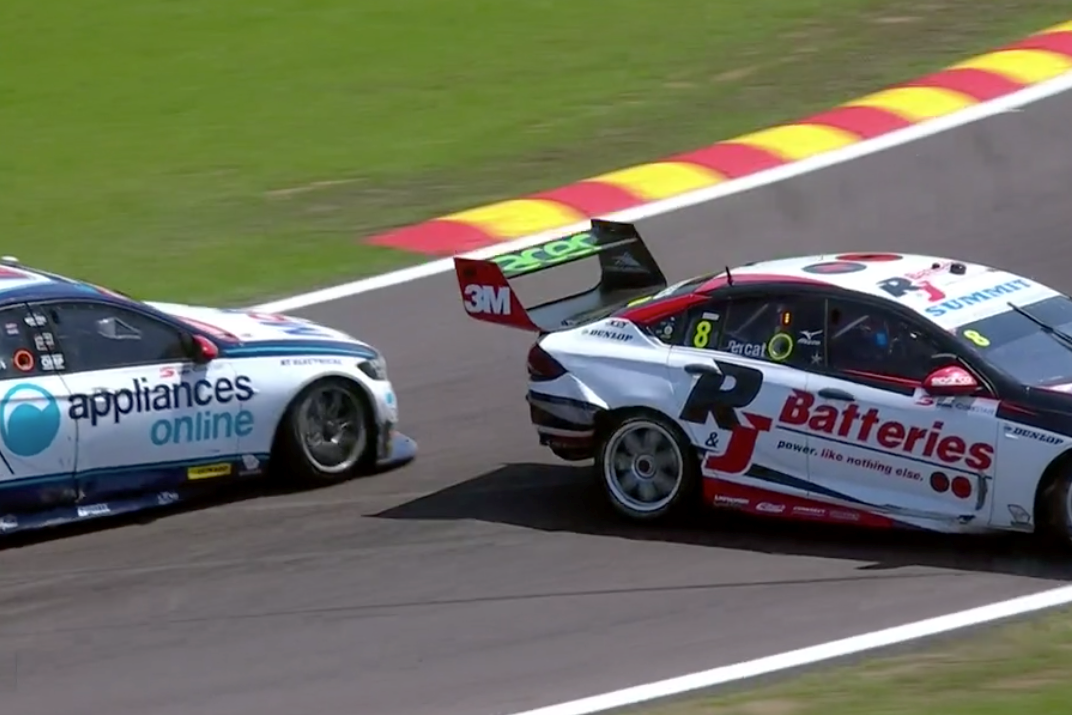 Chaz Mostert was penalised for a collision with Nick Percat

Chaz Mostert was left disappointed and down in 18th after a ‘line ball’ incident with Nick Percat in Race 17 of the CoreStaff Darwin SuperSprint.

Their battle came to a head on Lap 34 when the Mobil 1 Appliances Online Racing driver made contact with his R&J Batteries Racing rival.

Percat went to Mostert’s inside through Turn 1 and as the Walkinshaw Andretti United driver turned in, his left front corner clipped the right rear of Percat, who was sent into a spin.

Percat dropped onto the grass and ultimately fell down the order to 15th, but was promoted to 13th on corrected order once Jack Le Brocq and Mostert were penalised.

“It didn’t end the way we wanted it to, but rubbing’s racing and there was plenty of rubbing before that,” Mostert said.

“I think he ran down the inside straight on the dirty stuff first and then I’m not too sure. It’s one of those things. I thought I gave plenty of room but he just stopped so, yeah, it’s not ideal.”

Percat was left disappointed by the incident having been on course for his fourth consecutive top 10 finish in Darwin.

It’s the second consecutive weekend the Brad Jones Racing driver has been involved in an incident.

Percat had been challenging Red Bull Holden Racing Team driver Jamie Whincup in the laps leading up to the incident.

However, his tyres overheated and meant he soon dropped away from Whincup had to battle to keep a hard-charging Mostert at bay.

“We had a bit of pace over Jamie and (Cameron) Waters and I was trying to get there slowly,” said Percat.

“When I got there, I overheated the front tyre so I tried to pull back a bit and then obviously Chaz wanted to get amongst it.”

Despite the end result, Percat said he enjoyed the battle with Mostert.

“It was a mega battle up until then and (it was) disappointing because I got it stopped in control down at Turn 1,” said Percat.

“There was no locking and I was just going to hold the white line and then as he’s turned in I guess he hoped that I’d run up high and he’d over-and-under me which is cool racing but it wasn’t to be.

“I just grabbed the rear bar and fired me off into the weeds. It’s disappointing but the more annoying thing is that’s two races, two weekends where I’m just burning points. We’ve got a faster car than the dues in front of us in the championship so it’s a bit annoying.

“Luckily we’re fourth for the next one so hopefully we can snag a good result and get good points because the championship rewards being in that top five,” he added.

“Hopefully we can get the R&J Batteries car back up the front and give the boys at BJR something to celebrate because it’s been a bit lonely, just #8 doing all the heavy lifting for the last few weeks.”

Percat will have one more opportunity to find success at Hidden Valley Raceway with the final race of CoreStaff Darwin SuperSprint is set to start at 14:25 local time/14:55 AEST.