McLaughlin a comfortable winner in Race 17 in Darwin

McLaughlin a comfortable winner in Race 17 in Darwin 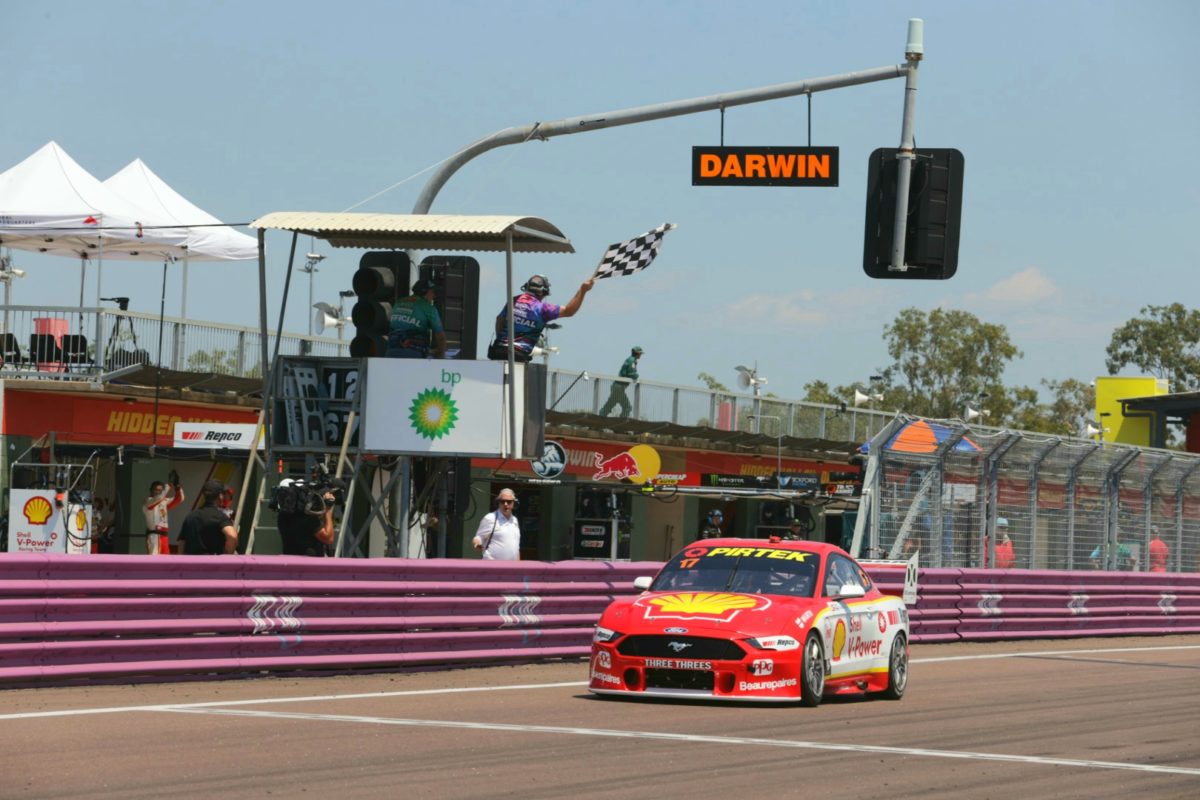 Scott McLaughlin was a straightforward winner in Race 17 at the CoreStaff Darwin SuperSprint as Chaz Mostert copped a penalty for spinning Nick Percat.

McLaughlin got the jump from pole position and the #17 Shell V-Power Racing Team Mustang effectively led all 38 laps around Hidden Valley Raceway, as it had done in Race 16.

Shane van Gisbergen got home almost 10 seconds behind in the #97 Red Bull HRT ZB Commodore and less than a quarter of a second ahead of a fast-finishing Scott Pye, who completed the podium for Team 18.

Fabian Coulthard, Cameron Waters, and Jamie Whincup filled fourth through sixth respectively, while Mostert was sent from seventh at the chequered flag to 18th due to a time penalty for a late run-in with Percat.

McLaughlin led the field away while team-mate Coulthard (#12 Mustang) went deep on the outside at the first corner and threatened to take second position from a third row start.

Coulthard and Waters were first of that bunch to pit, as they completed Lap 5, with each having working side tyres changed.

Having gone with McLaughlin initially, van Gisbergen had drifted to just over a second back by the time he filed into the lane on Lap 6 and resumed, on used rears, just ahead of Coulthard.

McLaughlin, Winterbottom, and Whincup came into the pits another lap later again and while the former retained the effective lead, Whincup jumped Winterbottom.

The latter lost yet another position, to an earlier-stopping James Courtney (#44 Boost Mobile Mustang), having reportedly been delayed exiting his box by the presence of David Reynolds (#9 Penrite ZB Commodore) in the lane.

McLaughlin also reportedly had new rears at his disposal having managed to save a set of tyres in Qualifying for Race 16 a day earlier, and the DJR Team Penske driver was over two seconds clear of van Gisbergen at the end of Lap 10.

Winterbottom’s slow pit transit, meanwhile became more costly when Lee Holdsworth (#5 Truck Assist Mustang) managed to hold him off at the start of Lap 9 as he resumed after his compulsory stop.

Mostert (#25 Mobil 1 Appliances Online ZB Commodore) ran to the end of Lap 18 before pitting from a nominal third and resumed in 17th, but with fresher rubber than those around him.

Percat came in a lap later from second on the road and slotted back into the train between Holdsworth and Winterbottom, as McLaughlin moved the margin over van Gisbergen to three seconds.

Mostert quickly passed Heimgartner, Winterbottom, Holdsworth, and then Courtney to sit ninth in the official order and an effective eighth with a bit over 15 laps to go.

Pye was last to pit, with 11 laps remaining, and resumed in fourth despite dropping his left-hand side wheels in the dirt at Turn 7 on his in lap.

Ahead of him were McLaughlin by almost six seconds over van Gisbergen, and Coulthard still third.

By then, Whincup had gone from hunting Waters for fifth to being hunted by Percat for sixth.

Pye lunged past Coulthard at Turn 14 on Lap 31, and set off trying to wipe out the roughly four-second gap to van Gisbergen, while the tables turned on Percat also when Mostert caught the R&J Batteries machine.

The Walkinshaw Andretti United driver gave the Brad Jones Racing pilot a nudge through Turn 6 on Lap 32 before an elbows out stoush broke out at the start of the following lap.

Mostert initially took seventh position but Percat fought back, only for front-to-rear contact to send #8 spinning into the weeds at Turn 1 on Lap 34 as he tried to complete the re-pass.

Car #25 was quickly issued a 15-second penalty for a driving infringement, and Garry Jacobson (#35 Yellow Cover ZB Commodore) copped the same for unloading another BJR man in Macauley Jones (#3 CoolDrive ZB Commodore) at the same corner later in the race.

Up front, however, McLaughlin was untroubled as he won by 9.6873s and extended his championship lead over Whincup to 141 points.

“I got a pretty good start; as always it was real hard racing with Shane and I really enjoyed it. Our car hooked up and took off.

“I knew Scotty was going to come with fresh tyres there so I decided to try and pull a gap. To have the gap we had at the end is testament to the guys and the way they build the car.”