Whincup pips McLaughlin to pole for Race 16 in Darwin

Whincup pips McLaughlin to pole for Race 16 in Darwin 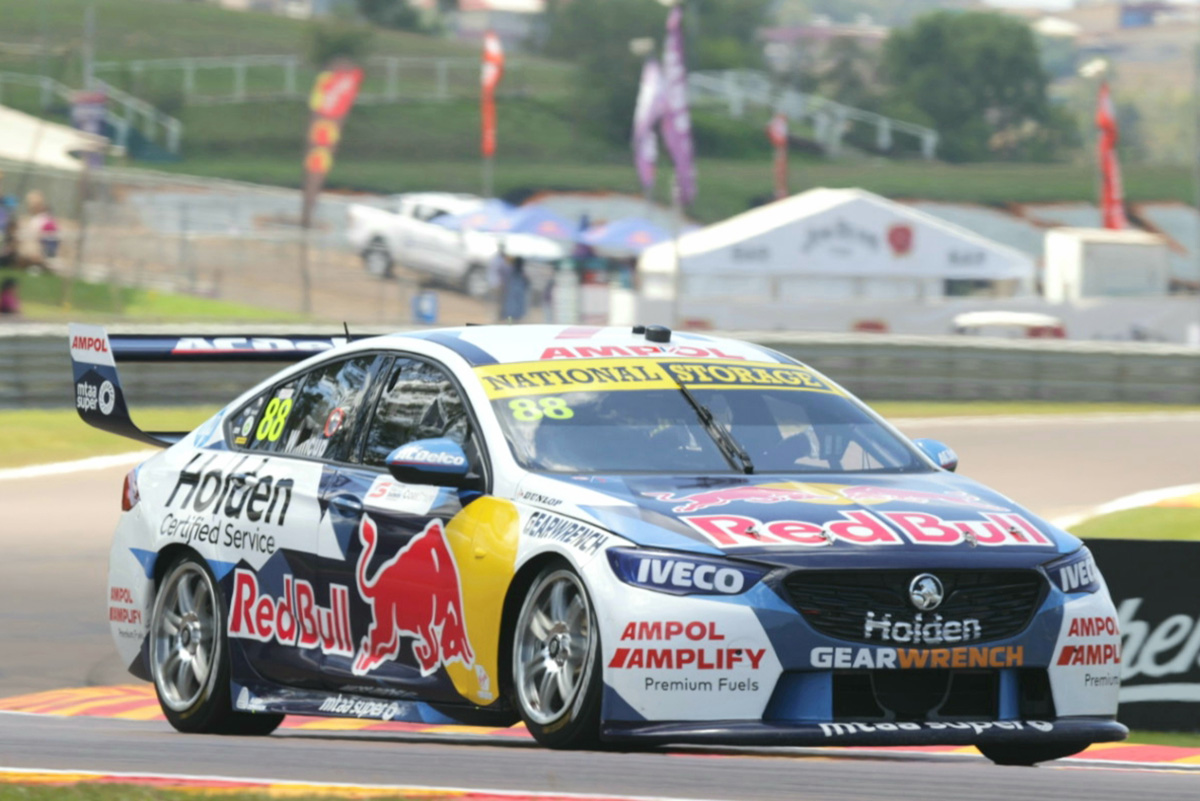 Jamie Whincup has come from a provisional 13th to beat Scott McLaughlin by 0.06s in the Top 15 Shootout which finalises the grid for Supercars Championship Race 16 in Darwin.

McLaughlin came eight cars later and all but matched his Triple Eight rival through the lap, but was 0.0633s away all told in the #17 Shell V-Power Mustang.

Mark Winterbottom was last man onto the circuit but dropped the #18 Irwin Tools ZB Commodore into the gutter on the outside of the Turn 10/Turn 11 complex and finished seventh-fastest.

“We were genuinely P13 in Part B and then we tuned the car up for the Shootout and she was much better,” said Whincup.

“I’m very happy to get the pole.

“The car was very good and I got the most out of it. Maybe we were gifted a tenth or so by the cloud cover but I’ve been on the other end of that plenty of times so you take one when it comes.”

Whincup was deep into Turn 1 and set the then-fastest split in each intermediate, with only Courtney subsequently bettering him in the second sector of the race track.

Their team-mate Lee Holdsworth was best of those on used tyres in taking the #5 Truck Assist Mustang to a 1:06.4857s, fifth all up and faster than he had done in provisional qualifying.

Anton De Pasquale wound up sixth from a provisional ninth after clocking a 1:06.4923s with used fronts on the #99 Penrite ZB Commodore.

Winterbottom looked on for third spot before he found himself slightly wide of the ideal line as he dropped back down the hill and broke the beam at 1:06.4969s.

Nick Percat logged a 1:06.5278s having also dropped a wheel off through the slalom section in the #8 R&J Batteries ZB Commodore.

The Brad Jones Racing driver also reported getting wet from his helmet hose through the first sector.

Van Gisbergen gave up ground to Whincup in the first sector before setting a 1:06.5931s all told, meaning a start of 11th.

Chaz Mostert got the #25 Mobil 1 Appliances Online ZB Commodore slightly loose through Turn 1 on his way to a 1:06.6171s which puts him 12th on the grid.

Rounding out the 15 was the second man to start the shootout, Jack Le Brocq, who set a 1:06.8084s with used tyres on the #55 Supercheap Auto Mustang, which he dropped over the edge of the race track in finishing his lap.

David Reynolds missed out on progression to the Top 15 Shootout having stayed in pit lane after being among the initial 16 drivers on the race track in Part 2 of Qualifying for Race 16.

He had been shuffled back from 12th after that first run to 15th before Mostert lifted himself from 16th to 12th just prior to the chequered flag, consigning the #9 Penrite ZB Commodore to 16th on the grid.

Winterbottom was quickest in the second 10-minute stanza, his 1:06.2573s narrowly slower than Team 18 team-mate Pye had gone in Practice 1 and McLaughlin in Practice 2, but slightly better than ‘Frosty’ himself had been across those sessions.

McLaughlin was fifth in Part 2 of Qualifying with a 1:06.4346s while reusing the tyres he rolled out on in in the first segment, taking advantage of the changeable cloud cover over the circuit.