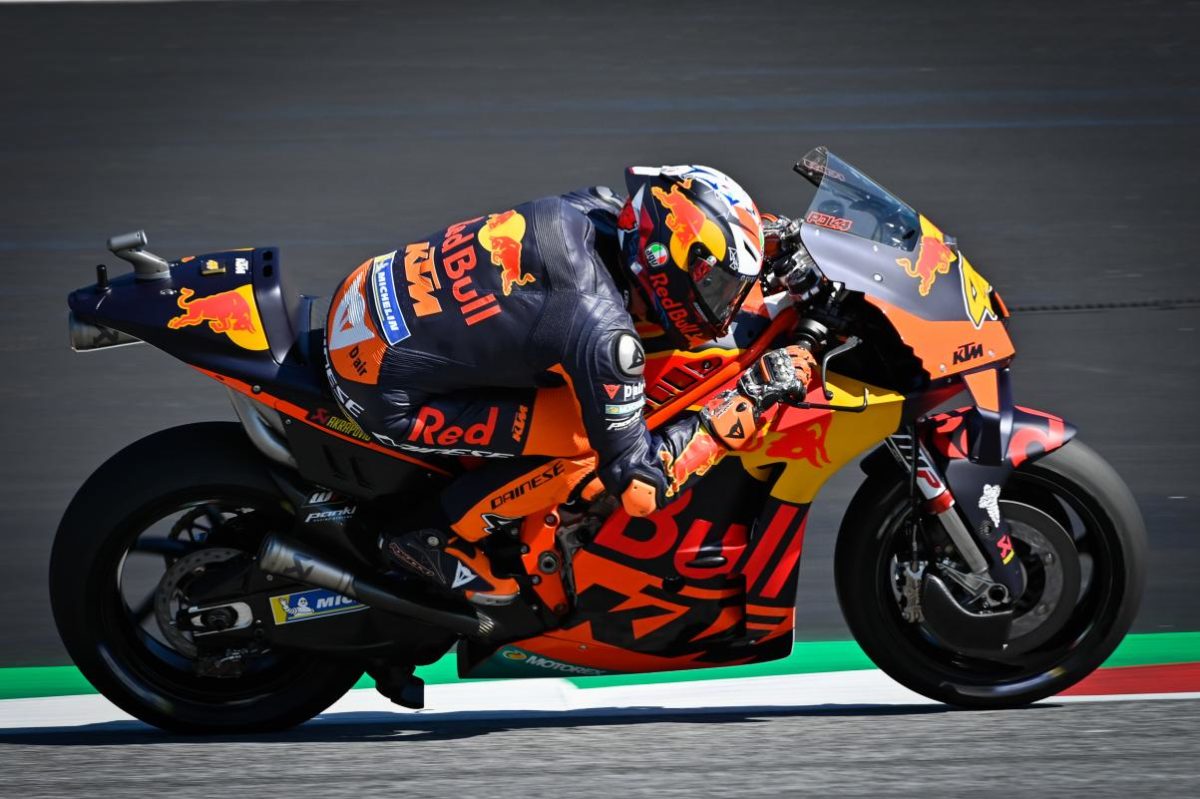 Pol Espargaro has ridden to his and KTM’s first MotoGP pole position in qualifying for the Styrian Grand Prix, while Johann Zarco was third-fastest.

Espargaro’s late 1:23.580s around the Red Bull Ring edged lead Honda pilot Takaaki Nakagami by 0.022s while Zarco’s position is largely academic given he will be forced to start from pit lane as punishment for last weekend’s huge crash at the same circuit.

Instead, Suzuki Ecstar’s Joan Mir will start from the front row and Jack Miller from fourth, the Australian having ridden his Ducati with soreness in his right shoulder due to a crash at the fast Turn 6 in Free Practice 3.

Championship leader Fabio Quartararo was 10th-fastest in Qualifying 2 while fellow Yamaha rider Valentino Rossi failed to make it past Qualifying 1 and is due to start 14th once Zarco’s penalty is accounted for.

Alex Rins (Suzuki Ecstar) was fastest after the first flying laps with a 1:24.461s, before Maverick Viñales set a 1:24.217s which was quickly cancelled due to exceeding track limits on his Monster Energy Yamaha.

That meant that Franco Moribdelli’s 1:24.249s was briefly quickest before it was usurped by Petronas Yamaha SRT team-mate Quartararo’s 1:23.866s.

Espargaro (Red Bull KTM Factory Racing) was next to move the mark, to a 1:23.645s, but Nakagami held top spot when the opening runs came to an end by extracting a 1:23.602s from his Idemitsu LCR Honda.

The latter quickly jumped to third when he went for a second run on his Pramac Ducati with a 1:23.700s, just before Espargaro put his KTM back into first position with a 1:23.580s.

Mir climbed to third with a 1:23.678s in the second-last minute of the 15-minute hit-out, and it mattered not for him when Zarco usurped him from 10th position just before the chequered flag came.

Viñales was faster than Espargaro’s best time to the second sector at that point but lost ground over the second half of the lap and ended up improving only to sixth on the timesheet and fifth on the grid.

Nakagami was still a threat of reclaiming pole, clocking personal best second and third sectors on his final lap, but notification that his time would be cancelled due to straying beyond track limits came as the Japanese rider accelerated onto the main straight.

It will nevertheless be the LCR man’s first front row start in MotoGP.

The latter denied Iker Lecuona (Red Bull KTM Tech3) passage to Q2 by jumping to second spot with the chequered flag out on the first 15-minute session.

Lecuona will still start 12th on the grid due to Zarco’s pre-existing penalty, but missed out on an opportunity to further improve that position.

Brad Binder (Red Bull KTM Factory Racing) is set to start 13th and Rossi 14th, the latter having crashed at Turn 9 while chasing a top two finish at the end of Q1.

Alex Marquez earned 17th in qualifying and therefore 16th on the grid on his Repsol Honda, one position ahead of Cal Crutchlow (Castrol LCR Honda).

After surgery for a fractured scaphoid, Zarco only passed a fitness test in time to start FP3 and sat out the final practice session before going into Q1.