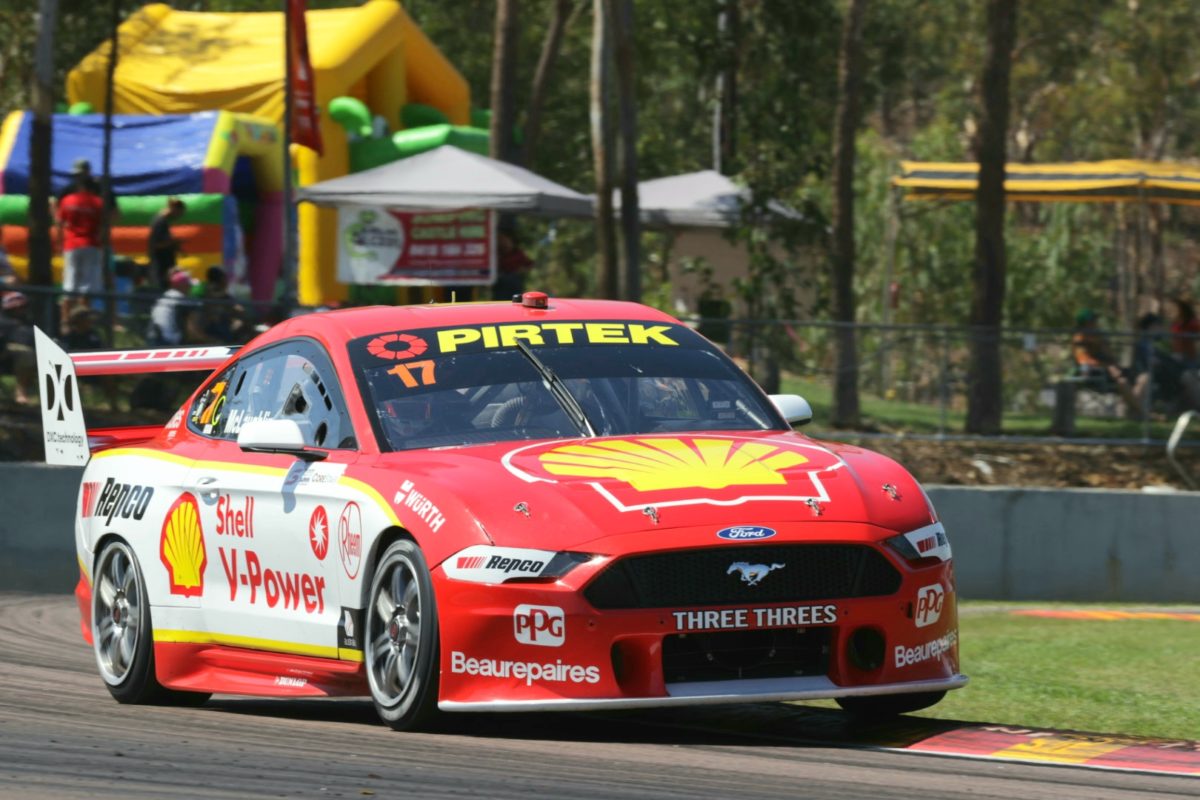 Scott McLaughlin has taken victory in Race 16 of the Supercars Championship at the CoreStaff Darwin SuperSprint, from Jamie Whincup and Cameron Waters.

McLaughlin took his Shell V-Power Mustang into the lead on the run to the first corner and effectively maintained it throughout the 38-lap encounter at Hidden Valley Raceway, while the Red Bull Holden Racing Team’s Whincup was similarly second for the duration.

Waters passed Tickford Racing team-mate James Courtney in the compulsory pit stop cycle which mostly played out in the early stages given the all-soft tyre allocation and relatively low degradation.

Courtney took fourth in the end, one position ahead of Nick Percat, while Shane van Gisbergen had a relatively charge home to eighth after an against-the-grain four-tyre pit stop.

McLaughlin (#17 Mustang) got a slight jump on Whincup (#88 ZB Commodore) from the outside of the front row and managed to cover the Triple Eight entry by moving right up against the inside wall on the run to the first corner.

Whincup was investigated regarding his start procedure but soon cleared, as McLaughlin moved his advantage past one second on Lap 3.

Courtney was first among the bunch who opted to pit as they completed Lap 5 and so began the predicted pattern of changing two tyres, although there was divergence with respect to the choice of rears or working side.

Waters was into the lane on Lap 6 and, having parked Car #6 on the inside of #44 as they arrived at Turn 1, he managed to stave off Courtney for an effective third position.

McLaughlin pitted at the end of Lap 7 and took new rears, while Whincup had used rears put onto #88 when he took service a lap later and resumed just behind #17 in the battle for the effective lead.

The margin between the two stabilised at a bit over one second as Whincup’s tyres came up to temperature, while Waters and Courtney continued to hold down an effective third and fourth respectively.

Behind, the battle was on from fifth position all the way beyond the top 10.

Coulthard, who pitted on Lap 10, was already down the inside of Bryce Fullwood (#2 Mobil 1 Middy’s ZB Commodore) when the rookie pinched a brake and ran off at Turn 5 on Lap 12.

The DJR Team Penske driver was pressuring Holdsworth for an effective fifth 10 laps later, but instead it was Percat (#8 R&J Batteries ZB Commodore) squeezing past him at Turn 5 on Lap 25.

Percat got Holdsworth at Turn 1 on the next lap, and Anton De Pasquale (#99 Penrite ZB Commodore) passed Coulthard a few corners later.

De Pasquale put Holdsworth back another position at the Turn 6 hairpin on Lap 28, with some contact in the door of Car #5 on his way through, before Chaz Mostert (#25 Mobil 1 Appliances Online ZB Commodore) wrested an effective ninth from Mark Winterbottom (#18 Irwin Tools ZB Commodore) after running side-by-side with his former team-mate from Turn 1 to Turn 6 on Lap 29.

Once Pye pitted at the end of Lap 29, competing the cycle, McLaughlin as 2.4s to the good from Whincup, with Waters well back in third.

The championship leader eased to victory in the laps which remained, extending his points margin to 109 over the race runner-up at the head of the standings.

“The start was really pivotal, to be able to get in front of Jamie into Turn 1 and I vowed to do my own race from then on,” said McLaughlin.

“It was very tight but I got there in the end.”

On changing rears instead of right-hand side tyres this weekend, he explained, “Jamie did that last week so the benefit of coming back here the week after was to do the same thing and try it as well.

“I think it was a better strategy, the boys’ pit stop was unbelievable, really fast, so I’m really proud of them. They’ve been working hard and it was a nice start to the weekend.”

Waters bagged the final podium place by just under a second all told, from Courtney, Percat, De Pasquale, and Holdsworth.

Triple Eight changed all four tyres on Car #97 when van Gisbergen pitted at the end of Lap 24, as he had suggested during his first stint, and while it cost him a position on the road to David Reynolds (#9 Penrite ZB Commodore), it meant that the New Zealander came home with a wet sail.

He got back ahead of Reynolds on Lap 29 to move into an effective 11th, while Mostert got eighth off Coulthard on Lap 32 after an almost as long exchange as he had with Winterbottom.

Van Gisbergen dived past Coulthard at Turn 14 on Lap 33, and finished his rise with a pass of Mostert down the straight and into Turn 1 on Lap 36.

Mostert ended up ninth and Coulthard 10th, ahead of Winterbottom, Reynolds, and Pye.

Chris Pither (#22 Coca-Cola ZB Commodore) pulled off the side of the road late in the piece, joining Le Brocq as the only other retirement.

The Virgin Australia Supercars Championship field is back on track tomorrow morning at 10:20 local time/10:50 AEST for another two qualifying sessions, ahead of Races 17 and 18 of the season.