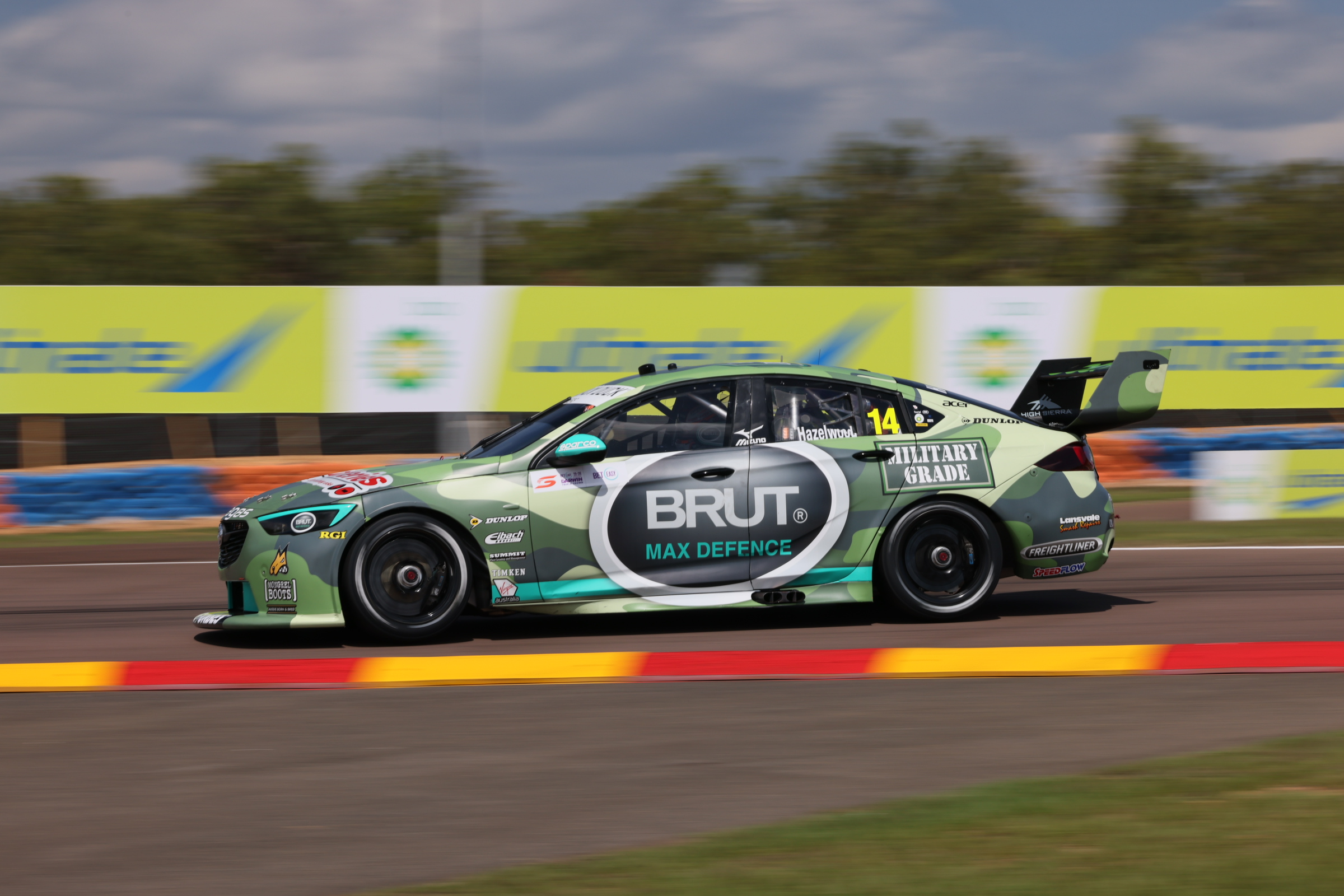 Brad Jones Racing driver Todd Hazelwood says he is “at a bit of a loss” as he and the team grapple with a mystery issue on his Holden ZB Commodore.

After strong results at the two Sydney Motorsport Park events earlier this year, Hazelwood has struggled to repeat his form in the Darwin double-header.

The 24-year-old was taken out in an incident in Race 13 at the Darwin Triple Crown, and since then hasn’t been able to come close to the front.

Hazelwood went on to claim finishes of 18th, 20th, and 20th again in the first leg of the double-header at Hidden Valley Raceway..

The second leg started where he left, Hazelwood recording the 19th and 22nd fastest times in Practice 1 and Practice 2.

He then went on to qualify 23rd in the Brut Military Grade entry for Race 16 of the Virgin Australia Supercars Championship.

After the morning’s practice sessions, Hazelwood said he couldn’t understand the sudden lack of pace.

“We’re at a bit of a loss at the moment to be honest,” said Hazelwood.

“We’re certainly not where we want to be, being right at the bottom of the timesheets.

“Last week we had a really strong start to the weekend, inside the Top 10 and the car felt effortlessly fast but since the hit last week we’ve really been chasing our tails.”

During the midweek break between events, the team sought to resolve the issue with an engine change.

“I’ve got to give credit to the team because they’ve been working day and night throughout the week trying to rectify the issue,” said Hazelwood.

“We had an engine change, all these things that we’ve tried to rectify but it looks like we’ve still got some sort of crazy issue going on in the background that we can’t rectify.

“We’re trying to remain calm and not get frustrated this early in the weekend but it’s certainly not ideal at this point.

“The straight line doesn’t look great but it’s always easy to point the finger at engine when there’s so many other things going on.

Asked whether he believed the issue was engine related, Hazlewood said he wasn’t sure where the issue lies.

“We’re doing everything we can at the moment. I think it’s still a hangover from last week,” he said after Qualifying.

“We’re trying to chip at it one by one but it’s super painful, knowing we’re nowhere near where we think we should be.

“The Brut Military Grade Commodore is capable of a lot more than what we’re doing right now so it’s a bitter pill to swallow.

“The team and everyone else is capable of more than what we’re achieving but it’s just one of those niggly issues that we’re desperately trying to get on top of.

“Unfortunately we haven’t been able to solve it just yet. We’re trying to dissect everything through the chassis, whether it be uprights, transaxle.

“There were so many things we had to change last week and we tried to rectify last weekend in races two (Race 14) and three (Race 15) on Sunday and we obviously weren’t on top of it.

“We made the engine change and a few other things during the week, we’ve tried to maximise everything from an aero point of view.

“It’s trying to tick everything off the list but at the moment, we’ve just got to stay positive, keep back-slapping everyone to try to get through this bit of pain we’re going through at the moment.”